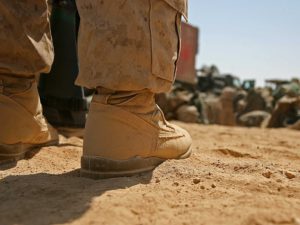 Despite various proclamations that the United States will not have any “boots on the ground” in Syria, on March 9 the Washington Post and CNN reported that the Trump administration sent hundreds of Marines to the area in and around Manbij, Syria, to allegedly prevent conflict between U.S. backed militants and Turkish forces. The move was not only void of Congressional or UN approval, but is a violation of Syria’s national sovereignty and is thus illegal.

Coming on the heels of a new plan submitted by U.S. Defense Secretary “Mad-dog” Mattis, the Trump administration is seeking to pursue a more overtly militarist line as opposed to Obama’s “soft power” approach which was no less deadly but less bombastic. To add, the Trump administration is gearing up to deploy 1,000 combat troops to Kuwait, where 6,000 troops already reside, to act as a reserve in the
“war against terrorism” in Syria and Iraq.

“The Marines on the ground include part of an artillery battery that can fire powerful 155-millimeter shells from M777 Howitzers, two officials said, speaking on the condition of anonymity because of the sensitivity of the deployment. The expeditionary unit’s ground force, Battalion Landing Team 1st Battalion, 4th Marines, will man the guns and deliver fire support for U.S.-backed local forces who are preparing an assault on the city. Additional infantrymen from the unit are likely to provide security.”

Given the recent history of the United States’ adventurism in both of these countries, this surge of troops is not a light matter. It was the U.S. invasion of Iraq that gave birth to Al-Qaeda in Iraq, the precursor to the Islamic State and other terrorist groups.

The recent push to send ground troops into Syria must be seen within the context of the overall push for regime change and destabilization of the Syrian government.

Some would posit that this marks a heightened escalation on the part of U.S. imperialism, which has relied mainly on proxy forces of so called “moderate” terrorist groups and the “Free Syrian Army,” a group financed by Gulf State monarchies and Western imperialist states, since the conflict began some six years ago. But, what does “escalation” mean when the United States under the Obama administration dropped 12,192 bombs on Syria in 2016 alone, destroying the country’s infrastructure killing thousands?

To put things into context, the United States has imposed suffocating sanctions on Syria, which deprives ordinary Syrians of the basic necessities of life, while spending billions of dollars every year to train and arm so-called rebel forces, and has used depleted uranium, which is a war crime and act of indiscriminate terror.

The U.S. has already had boots on the ground conducting training and advising military operations to various rebel outfits aimed at carrying out regime change in Syria.

In an interview with China’s Phoenix TV, President Bashar al-Assad stated that Damascus did not approve of any deployment of U.S. forces in Manbij.

“Any foreign troops coming to Syria without our invitation or consultation or permission, they are invaders, whether they are American, Turkish, or any other one,” stated Assad. “And we don’t think this is going to help. What are they going to do? To fight ISIS (Daesh)? The Americans lost nearly every war,” he continued.

The U.S. government is involved in a feverish dash to secure the city of Raqqa before the Syrian Army is able to capture it from Islamic State forces. Raqqa has become a site of intense battle against IS forces, where they maintain their de-facto capitol. Many atrocities have piled up on the side of the U.S.- led coalition and IS. If the U.S. is able to play a major role in the capture of Raqqa, it may be able to carve out a base in eastern Syria from which it could deepen its interveiton

U.S. imperialism has a complex relationship with the Syrian Democratic Forces. The SDF is a mix of Arab and Kurdish militias, whose central fighting force is the Syrian Kurdish People’s Protection Units (YPG). Although the SDF receives weapons and support from the United States, these forces are bitter enemies of another U.S. ally – Turkey.

The Turkish government under the repressive Erdogan regime launched the “Euphrates Shield” operation last August to prevent the creation of a contiguous Kurdish-controlled zone in Norther Syria. This mean that the NATO member Turkey would come into direct confrontation with U.S. backed militants potentially sparking a much more prolonged and deeper conflict.

Moreover, while the U.S. and their coalition claims to be working to defeat IS in Raqqa, various reports state that the U.S.-led coalition is carrying out airstrikes that target Syrian civilians, military and infrastructure. Like a wrecking ball, U.S. imperialism’s push for “stability” in the region is running roughshod over the lives of Syrians, their army and their means to sustain life. The U.S. has no democratic aim nor are they solely interested in defeating IS or terrorism.

The Syrian government has demanded the UN Secretary General and Security Council get Turkey to withdraw
its invading forces from Syria and end its clear violation of Syria’s national sovereignty. Syria holds Turkey responsible as a major backer of terrorism in the country, having killed tens of thousands of people while destroying infrastructure.

With the SDF bolstered by the recent surge of U.S. troops, Turkey will certainly think twice before advancing on Manbij – for them to continue would risk a direct confrontation with the United States. Turkey is becoming more isolated. Moreover, Saudi Arabia and Qatar, two other supporters of extremist terrorist groups are losing influence in the war and are smarting after the liberation of Aleppo, Palmyra, and soon, Raqqa. The Gulf regimes are also bogged down in a bloody war in Yemen.

As the proxy war intensifies and U.S. imperialism continues to bolster its role in the region, all anti-war and progressive forces must see the writing on the wall. The recent surge in the military budget by billions of dollars indicates that the U.S. government has no interest in peace, the economy is heavily supported by militarism and investing in the death, destruction, and occupation of sovereign nations.

It is in the interest of working class and oppressed people in the centers of global capitalist imperialism to resist their own government’s illegal and imperialist acts of war in the Middle East. They share a common interest with the people of Syria and Iraq in ending this war, for it only benefits the forces of imperialism and their lapdogs in Turkey, Qatar and Saudi Arabia. We must demand that the U.S. get its hands off Syria, respect Syrian sovereignty and allow for a real resolution to this six year war.