Trump’s budget: An assault on the most vulnerable 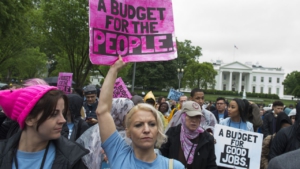 On May 23, the White House released more details of its 2018 federal budget proposal. Arrogantly entitled “The New Foundation for American Greatness,” the $4.1 trillion plan would drastically cut education spending, entitlement programs, and housing and health care aid. Unsurprisingly, this plan for “American Greatness” will only make the wealth of billionaires like Trump even greater to the detriment of millions of poor and working-class Americans.

Trump and his cabinet full of war hawks plan to inflate the already vastly-bloated defense budget with an increase of 10% and an additional $2.6 billion for border security. An entire $1.6 billion will go to Trump’s proposed border wall, as well as a 6.8% budget increase for the Department of Homeland Security. The budget allocates an additional $469 billion for defense discretionary spending over the next decade.

All of this in a nation that already spends more on its military than the next 8 countries combined. Trump’s monumental proposed increases to defense spending will continue to fill the pockets of billionaire arms manufacturers and fuel the military industrial complex.

The budget would slash a total of 66 federal programs, from education to housing to health services, and cut Medicaid by $800 million in the next 10 years; during which 10 million poor Americans will lose their healthcare benefits according to estimates from the Congressional Budget Office. The budget would bar Planned Parenthood and other abortion providers from receiving federal funding, cutting off health care access for millions of women and LGBTQ folk who rely on these essential services.

The Environmental Protection Agency will be gutted with a 31% cut to its budget, along with an 11% cut to the Department of Interior. According to the budget’s architect Republican former Congressman Mick Mulvaney, spending funds on climate science is “a waste of your money.” The budget includes a 40% cut to to the EPA’s federal enforcement staff, which ensures that corporations are following regulations.

While the Trump administration has yet to disclose the details of their tax plan, the proposed budget features massive cuts to corporations from 35% to 15%. It would double the standard deduction for individual taxpayers, which is estimated to cost $7 trillion in tax revenue over the next decade. All of this with the assumption that the national GDP will reach 3% in 2017, a figure many economists consider too high and unlikely.

The budget represents three major components of the Trump agenda that we are all familiar with already: the massive transfer of wealth from the already-burdened masses of American workers to the 1%, the ramping up of our government’s already outrageous defense spending, and granting corporations even more freedom to harm humanity and the environment for profit. The proposed budget also falls in line with the Trump administration’s adversity to providing basic healthcare for women and poor folks.

It is a clear attack on even the most modest social safety net concessions won by the working class, from Social Security to Medicaid. With 1 out of 2 Americans either in poverty or near poverty, slashes to these essential programs will put millions of Americans at even greater risk.

While this proposal is not likely to pass in Congress, the Trump administration will certainly make a few minor changes to make it more palatable to those hostile to him from both major political parties. Millions of poor and working-class Americans are under threat of losing their most basic rights to healthcare, education, and a healthy environment. In a society that places people over profit—a socialist society—these rights would be guaranteed to every resident regardless of their background, identity or citizenship status.

But for now, the struggle for the most basic human rights will continue with the understanding that the Trump era will greatly intensify this fight. Every community, from immigrants to Muslims to women, has a stake in fighting back against this budget and the Trump agenda as a whole. History is on the side of the working class and oppressed. Whatever the Trump administration does, the people can undo!