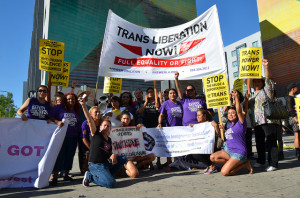 On July 24, the Los Angeles transgender community brought traffic in the streets of mid-town L.A. to a standstill protesting the recent brutal murders of two trans women in the course of one week—one in Florida, and another in California.  The victims are 66 year-old, KC Haggard of Fresno, Calif. and 25 year-old, India Clark of Tampa, Fla.

Neither woman’s murder is being investigated by local police as either a hate crime or anti-trans murder, but the community and its growing number of supporters is demanding justice for the victims and full equality for all trans people. The demonstration was attended by a broad array of organization including the ANSWER Coalition.

One of the lead organizers of the protest was Bambi Salcedo, President of the [email protected] This militant action was one of the largest and best organized actions in the struggle for trans rights in Los Angles in recent history. “We want to bring awareness and show our discontent with this violence,” said Ms. Salcedo.

The protest was also attended by trans rights organizers from Chicago, New York, San Francisco, Washington D.C., San Diego, CA and many other cities demanding dignity, equality and respect. Demonstrators carried placards and chanted in both Spanish and English for end to anti-Trans bigotry and violence. Over 100 activists attended the protest, as reported by the L.A. Times.

The trans community has recently won many victories through militant struggle, including workplace rights, better access to healthcare, and the pending right to serve openly in the military. However, as these recent two murders show, anti-trans bigotry and violence still exist in politics, the media and the police.

The Fresno police department is refusing to call KC’s murder a hate crime, referring to her callously as “a man in a dress.”  But surveillance footage of KC’s murder is circulating on social media. Closed circuit security cameras show KC being coaxed over to the passenger side of a SUV where she is suddenly and violently stabbed in the throat. Her attackers then immediately speed away. KC grabs her throat, attempts to flag down a passing car, which does not stop, then collapses on the sidewalk where she died without anyone ever coming to offer her medical attention or assistance. To protest the bigotry of the police, Karen Adell Scot, the founder of Transcare.org organized a vigil on the street corner in Fresno where KC was murdered to honor  KC’s memory and to demand justice for all and other victims of transphobia.

Also on July 24, in Tampa, Florida, a hundred people held a vigil in Gaslight park, the site where India Clark’s body was found three days earlier. In both KC’s and India’s cases, the local police attempt to prevent the working class unity with the trans community by vilifying the victims as “possible criminals.” This is a similar tactic used by cops in the cases of Sandra Bland, Michael Brown and other killed by police across the country.

The Florida police’s press release about India Clark’s death adds further insult to Ms. Clark’s murder, when the Hillsborough County Sheriff’s Office referred to India Clarke, and did the Fresno Police regarding K.c. Haggard, as a “male dressed in women’s clothing.” (ABC News)

Detective Larry McKinnon of Tampa Police told BuzzFeed News, “We are not going to categorize him as a transgender. We can just tell you that he had women’s clothing on at the time. What his lifestyle was prior to that we don’t know­­—whether he was a cross dresser, we don’t know.” (NBC News)

Friday’s militant protest reflects growing movement of trans people and their growing numbers of supporters. The cry for “Transpower Now!” is spreading across the country and will succeed in pushing back the forces of reaction and bigotry. Nothing short of full equality and justice for all trans people will be enough.