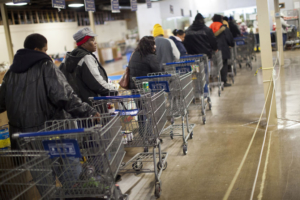 Recently, an article in MarketWatch published several alarming conclusions about the state of the finances of people in the U.S. based on their own tracking as well as on results of the new Federal Consumer Financial Protection Bureau’s survey of financial well-being.

The article states, “Nearly half of Americans have a tough time paying their bills, and over one-third have faced hardships such as running out of food, not being able to afford a place to live, or not having enough money to pay for medical treatment.”

Yet these growing financial burdens aren’t being felt equally throughout society. In fact, those who are in the top 1% of the wealthy elite are seeing steady increases in their share of the country’s wealth. The stock market has tripled since the Great Recession, so why are more people struggling financially? The accumulation of wealth by the already ultra wealthy is bound to the condition that the poor must become poorer. Those near the edge of poverty are being hurled into it as they fail to pay compounding debts, many of which were taken on in states of emergency just to pay for the very basic needs of survival. This isn’t a simple oversight of the capitalist economy — some hiccup in an otherwise prosperous system — but an intrinsic feature of how capitalism works.

When an economic system is not based on meeting the basic needs of all people, is it any wonder when huge swaths of the population find themselves simply without? It is no accident that more and more people are beginning to live day-by-day, patching together ultimately inadequate resources for survival, either through their social networks, dwindling government services or some combination. Nutrition, shelter, and healthcare are all necessities to sustain human life, and they depend on each other in order to be truly adequate. Addressing these areas of need as if they are not interrelated, as U.S. social services do through programs like SNAP or public housing, leaves the roots of wealth disparity intact and firmly implanted. One more medical bill, one more payday loan, one more seemingly small unforeseen expense all eventually pile up, burying now a full third of us in the conditions of poverty and insurmountable debt.

There is a way out, not just for a lucky few who manage to work the current system, but for all of us. A society built on meeting human needs is what we are fighting for when we fight for socialism. What must be provided for everyone in society is adequate food, work, rest, shelter, healthcare, education, all free from debt and exploitation. These are things we believe all people deserve. but are denied through the current capitalist system where the only goal is the pursuit of profit. A commitment to socialism, fundamentally, is a commitment to building a society that takes care of everyone, as the health and well-being of individuals is a collective, social responsibility. As wealth disparities widen, the struggle to survive sharpens and that edge must be directed relentlessly toward the true roots of inequality.