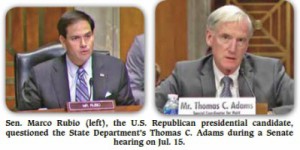 Last week’s U.S. Senate Foreign Relations Subcommittee hearing on Haiti did not turn into a partisan scuffle as we had expected. Instead, Senator Marco Rubio (R-FL), a Republican presidential candidate and chairman of the Subcommittee on Western Hemisphere, Transnational Crime, Civilian Security, Democracy, Human Rights, and Global Women’s Issues, opened the hearing with a banal review of Haiti’s political and economic situation and without the slightest criticism or questioning of the Obama administration’s policies in Haiti.

“I believe that Haiti is of vital interest to Florida, to the United States, and to the entire Western Hemisphere,” said Rubio in his prepared statement. “When Haiti is stable and prosperous, America benefits. When Haiti is unstable, insecure, and lacking the opportunities for its people, it creates vacuums where criminal gangs or worse can operate, and it can lead to migratory pressures in the United States or disastrous and deadly tragedies on the high seas.”

Senators Barbara Boxer (D-CA), David Perdue (R-GA), and Cory Gardner (R-CO) also took part in the hearing but didn’t have anything serious to say or question, except a short rant by Boxer about the child servants known in Haiti as restaveks.

However, the 45-minute-long hearing did contain some interesting remarks by its sole witness, Thomas C. Adams, the U.S. State Department’s Special Coordinator for Haiti. He made clear the central role that the U.S. is playing not just in the upcoming elections, but in overseeing Haiti’s sovereign governmental affairs.

Most stunning was Adam’s admission that Washington and its fiscal enforcement agency, the International Monetary Fund (IMF), are directly supervising the Haitian government’s financial conduct.

Asserting that the “perception and reality of corruption are very high” and the Haitian accounting system “not very transparent,” Adams complained that “Haiti started out [under Martelly] with over 500 bank accounts for the government, that were poorly policed.”

But then former “Prime Minister [Laurent] Lamothe [who resigned in December] agreed with us to do something about this” and made an arrangement with Washington whereby “we have a [U.S.] Treasury [Department] advisor working on this along with the IMF to reduce the [number of] accounts and to set up accounting units in each ministry, and that’s going pretty well.”

So just like under the 1915-1934 U.S. Marine occupation (which will mark its centennial on July 28), today’s Haiti also has U.S. supervisors watching over sovereign Haitian affairs.

Adams also explained that “at times this [foreign oversight regime] has stalled because a lot of people don’t want to see this. At critical times, the prime minister [Lamothe] came in and got the ministries together and said ‘Do it.’ And they’re continuing now through the Ministry of Finance,” under the direction of Marie Carmelle Jean-Marie, who had resigned due to regime corruption in 2013 only to be brought back (due to Washington’s dismay) in a cabinet reshuffle in 2014. She is today to the regime of President Michel Martelly what former World Bank official Marc “Mr. Clean” Bazin was to the regime of President for Life Jean-Claude “Baby Doc” Duvalier in 1982: the U.S. State Department’s deputy.

Adams also made some telling remarks about the upcoming election. “As electoral planning continues,” he said, “ the United States supports the CEP, the United Nations, the OAS [Organization of American States] and the Government of Haiti (including its national police) in their efforts to coordinate and execute successful 2015 elections.” In a very nuanced way, he placed the CEP, Haiti’s sole and independent electoral authority, on an equal footing with two foreign agencies and a corrupt partisan government in the “execution” of the elections.

The Haitian party Dessalines Coordination (KOD) and several Haitian popular organizations have expressed skepticism about the electoral process precisely because of the central role being played by the UN and OAS, who intervened at Washington’s behest in the 2010/2011 election to lay the ground for Martelly’s “victory.”

Perhaps foreseeing the nationalist reaction he might provoke, Adams went on to say: “Let me stress that the United States has no vote in these elections and does not support any candidate or group of candidates.”

“Does the administration believe that President Martelly is capable of administering free and fair elections for the Haitian people, and do you believe that he will step aside after the next president of Haiti is elected?” Rubio asked.

Adams replied that the CEP “got started late because of political gridlock” and now “they’re playing a little catch up, but I think that they are on track to hold the first round of elections on Aug. 9, and we are certainly supporting them in that effort.”

As for Martelly, Adams said: “I think he is deeply committed as a part of his legacy to having free and fair elections. He wants to have them and he wants to leave in February. He has told me that on numerous occasions.”

The day after the July 15 hearing in Washington, Adams traveled to New York for a donors conference at the UN General Headquarters on July 16, with UN Mission to Stabilize Haiti (MINUSTAH) chief Sandra Honoré and de facto Haitian Prime Minister Evans Paul in attendance. Countries, including the U.S., pledged financial support for Haiti’s elections to cover what Adams said was a $50 million shortfall.

Despite Adams’ open assertion of U.S. involvement in Haiti’s government and election, the subcommittee chairman seemed concerned about other foreign involvement.

“Is Venezuela playing any role in helping them conduct these elections?” asked Rubio, a Cuban-American fiercely opposed to the Cuban Revolution.

“They have mentioned they might,” answered Adams cautiously. “I think they might make a pledge tomorrow to support the elections financially,” which Venezuela in fact did.

“But will they be involved beyond that in terms of the actual …” Rubio pressed.

“No,” Adams asserted with the conviction of an unclear authority.

“Because in Venezuela, the current government there is not very good at free and fair elections, that’s why I ask,” Rubio explained.

In the end, Adams closed by asserting that only foreign capitalists can save Haiti through “direct foreign investment.” This tired mantra of U.S. administrations over the past 50 years discounts the creative and transformational power of the Haitian people themselves, who have been hobbled by political destabilization, economic blackmail, counter-revolutionary violence, and military occupation. But Adams offered this assessment:

“Haiti needs lots of new laws. They have a lot of antiquated laws. They need a lot of things that will make that country attractive to investment. While we have the Help and Hope Acts that do that, but there is not enough foreign aid or remittances to fix Haiti. If Haiti can’t attract more foreign direct investment, it’s going to be the same old story. There has been good economic growth in Haiti since the earthquake. Forty years before the earthquake there was a negative growth rate in Haiti, slightly negative. It’s been about 3 or 4 percent since then, but it needs to be 7 percent to eradicate poverty. For that to happen, they have to really fix a lot of their institutions, their judicial system, and pass a raft of modernizing laws, and clean up corruption. If they do that, I think they will get the foreign direct investment that will ultimately solve their economic problems.”

In closing the hearing, Senator Marco Rubio told the faithful State Department official Adams without the slightest trace of irony: “We want to thank you for your service to your country and your service to Haiti.