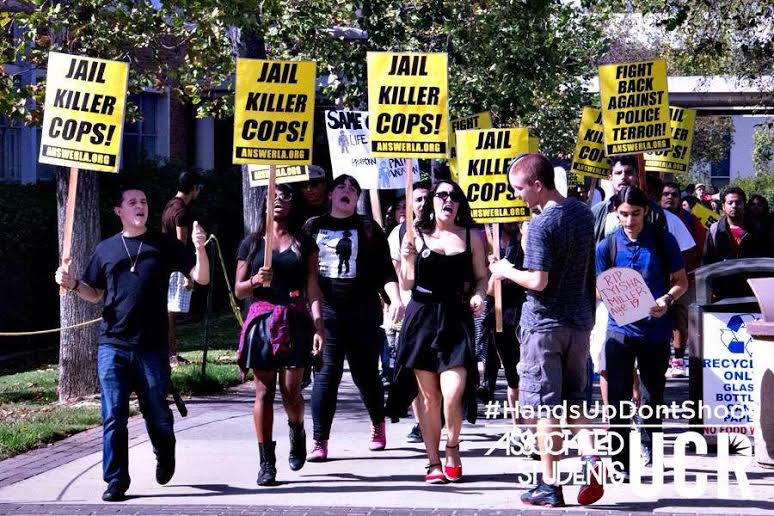 If cops in this country know anything, it’s that stepping over the line will not get them in trouble. Even if it means executing a teenager in his own neighborhood in broad daylight, they know that the so-called “justice” system does not apply to them, and they will hardly be reprimanded or punished, let alone jailed for murder.

This is what the people of Ferguson, Missouri have come to understand very well after the cop who infamously killed teenager Michael Brown was not even arrested. For almost three months they have protested, and on October 22nd, communities around the country protested in solidarity.

The students and faculty of University of California – Riverside were one of these communities. Several dozen students marched chanting “protect and serve? that’s a lie, they don’t care if Black youth die!” and “these racist cops have got to go!” 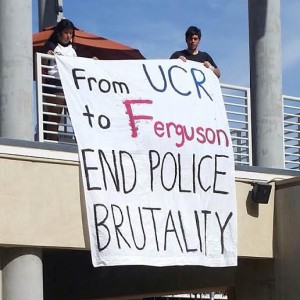 UC campuses and the city of Riverside both have their own histories of police brutality. In 1998, four Riverside police officers shot an innocent 19-year-old Black woman named Tyisha Miller while she was having a seizure in her car. The officers involved have not been prosecuted. In 2011, the UC Police Department unnecessarily pepper-sprayed several UC Davis during a sit-in and in 2012, UCPD fired rubber bullets at UCR student protesters.

The only domestic force that can hold cops accountable are the people. Murders and terror that rock countless communities can will be reduced when the very people the police are supposed to be “protecting and serving” take to the streets in large enough numbers to voice their anger at racist and brutal police practices and the system that justifies them. Only a mass people’s movement can achieve justice for the deceased and accountability for the living.