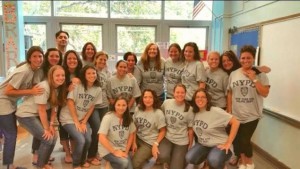 This month over 1 million students went back to school in the largest school district in the country, New York City. While well-known battles are raging within the school system over charter school development and standardized testing, this school year has also posed a new sharp question: what attitude should teachers  and their union take towards police brutality?

A political struggle has been opened on account of the United Federation of Teachers’ endorsement of the “We Will Not Go Back” march led by Al Sharpton on Aug. 23. Around 10,000 people joined the march, including a few labor unions such as 1199 SEIU. The march took place in Staten Island at the site of the Eric Garner’s murder at the hands of an NYPD cop, Daniel Pantaleo.

The UFT was the only public-sector union to endorse. The UFT’s decision was unusual given its historic

silence on such issues, and immediately caused a stir inside the union. Some said the march had nothing to do with teacher’s issues, while others said the union leadership should not criticize police.

It is important to note that Al Sharpton and Michael Mulgrew, the president of the UFT, bent over backwards in their speeches to say that they are “not anti-police” and to encourage police-community collaboration.

(This was the tightly controlled political message of nearly every speaker. The rally was in some ways a living polemic against the militancy of the Ferguson Rebellion, aimed and capturing and containing the mass anger from spilling over in New York. But that is a separate question, for a separate article.)

Nonetheless, a group of stridently pro-police New York City teachers started calling for UFT President Michael Mulgrew’s resignation and a significant number took to social media attacking the UFT’s endorsement. On the first week of school, this group of conservative and overwhelmingly white teachers called a protest action for teachers to wear “New York Police Department” t-shirts to work, despite a union statement warning them not to. It made the cover of the New York Post.

In crudely flaunting their pro-police message, these teachers displayed contempt for the Black and Latino communities, who make up the majority of the student body and who are loudly demanding an end to racist police brutality and harassment.

But it is not exactly surprising that there remains a significant number of reactionary white teachers in the New York City school system.

What was more troubling was the response of the Movement of Rank and File Educators (MORE), which calls itself the “social justice caucus of the UFT.”

MORE sets out to build a progressive membership within the UFT and has provided key support in mobilizing union chapters that are fighting charter school co-location, dealing with abusive administrations, and in defense of students’ rights. Its mission statement says that the schools “should be the people’s schools” and reflective of the communities they serve. MORE has repeatedly criticized the UFT leadership for not being aggressive enough in these battles and for lacking vigorous democracy inside the union.

The MORE statement, issued two days before the march, explained that the caucus had differing views on the sponsorship of the march. While affirming that the union must be “on the forefront of battles for racial, social and economic justice” and then declaring solidarity with the Garner family and students dealing with police harassment, the statement did not defend the UFT’s participation in the march.

Instead, MORE focused its criticism on the UFT for not offering a “healthy, informed and democratic debate” on the subject. Worst of all, it concluded: “Rather than allowing these issues to divide us, we encourage the leaderships of the UFT and Police Benevolent Association to find ways to work together and unite us.”

The Police Benevolent Association is one of the most fascistic forces in New York City, holding support rallies for killer cops, championing stop-and-frisk, taunting the families of victims and attacking any public figure who dares speak out against police misconduct. It is not possible to be an anti-racist and social justice caucus — or to fight for justice for Eric Garner — while simultaneously working with the PBA, the most vocal defenders of Officer Pantaleo.

As some MORE members and leaders have stated online, the caucus’s confused statement contradicts its mission statement. It does a disservice to the efforts to build genuine unity between the union and the city’s oppressed communities. That unity must be the backbone of the overall struggle for public education and social justice more generally.

Remembering the lessons of 1968

No progressive teacher in New York can forget that the UFT has a lot of work to do to rebuild a strong relationship with the city’s Black community in particular. The union’s only strike, which it still cites approvingly in its literature from time to time, was in 1968 against the community control of schools in Black communities. It revealed the number of outright racist New York teachers — who were far more numerous then — and caused deep and lasting damage.

Above all, it revealed the racist implications of a majority white and “professional” union in particular taking a narrow trade union perspective, rather than linking with and supporting larger social struggles. While nominally an anti-racist union in support of the Southern civil rights movement, the UFT leadership was hostile to the movement for Black self-determination in its own city, fighting the growing demands for community control over the schools as a threat to their workplace rights.

In the decades since, many radical activists — including teachers, parents and community members from the city’s Black and Latino communities — have worked hard to rebuild the educator-community relationship based on anti-racist and progressive principles. That the UFT decided to endorse Sharpton’s march should be seen in that context, as a positive change for a union that for far too long avoided “divisive” issues like racism and police brutality in New York.

The entrance of powerful labor unions into the police brutality movement of course presents its own challenges to radical activists — because of the moderate, passive and highly controlled pro-Democratic Party message the unions bring. But that is a separate question of how to tactically contend for political leadership. In general, it is a highly welcome development for the labor unions, as the largest organizations of the New York City working class, to mobilize for such events — to be, unlike in the 1968 strike, on the correct side of the barricades.

Unite with students and parents — not racist teachers

Being a public school teacher in New York City means working in with entire student populations that are non-white. For example, in my school, half the population is Latino and the other half is Black. About 40 percent of the students have an identified disability. In the city as a whole, 85 percent of students are Black, Latino or Asian and four out of every five receive free or reduced lunches, meaning they are near or below the poverty line. In my experience as a Special Education teacher, I know that my job means advocating for my students and their families both in and outside of school.

The police exist in order to maintain the status quo, and this is obvious in New York City, where the police amount to a medium-sized army that patrols the streets like an occupation force. Even the youngest among our students can easily recognize that the cops are not here to protect and serve them.

From Ramarley Graham to Shantel Davis to Reynaldo Cuevas to Eric Garner, my students are always hearing about another Black or Latino youth being murdered by the cops.

I teach middle school, and I have taught students about Stop-and-Frisk, the wars abroad, the low-wage worker struggle and the fight for a $15 minimum wage, and the Black Liberation Movement. My students are able to connect with these topics effortlessly because they see racism on a daily basis.

Instead of calling on all teachers to join the struggle against police brutality, MORE decided to focus on the union’s faulty democratic processes. But this amounted to the same criticism as that of the outspoken reactionary teachers, uniting in the name of democracy the “left” and the “right” against the union leadership.

While fostering union democracy is of course a critical issue, there was no violation in having an executive leadership make an endorsement of an event. This is what they are elected to do.

As the drafters of the MORE statement probably recognize, a drawn-out debate (in the summer no less) would have likely given the racist teachers more time to mobilize and would have made endorsement of the march less likely.

This would not be the first instance in history that a union leadership, however flawed, would be “ahead” of its membership in openly supporting a protest against racism and police brutality. But in such cases, the radicals should be at the forefront defending the union’s endorsement, in this case hitting back against the racist teachers and persuading those who are on the fence.

A better response from MORE would have been to help the UFT fully mobilize for the march; to distribute MORE literature to those teachers who spent an August afternoon protesting in Staten Island; and to direct a flyer to the thousands of Black and Latino community members that teachers are standing side by side with them for justice for Eric Garner.

Above all, radical teachers should be saying that we want more UFT involvement in the anti-police brutality struggle. A one-day event is not enough. A moment is not a movement. Radical teachers can help be the bridge to community activists, and the considerable resources of the union could give a huge boost to grassroots organizations fighting police brutality in the communities where we work and our students live.