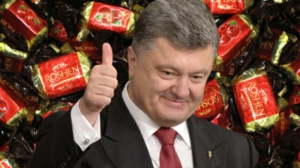 Ukrainian President Petro Poroshenko joined scores of other world leaders yesterday when the recently published Panama Papers revealed the candy tycoon’s offshore financial dealings. The Panama Papers revealed illicit offshore financial accounts implicating many in tax evasion, money laundering and other financial crimes and shenanigans. Although he was not even mentioned in the leaked documents, the Western media has unsurprisingly fixed its cross-hairs on Vladimir Putin in a politically motivated smear job, while only tangentially mentioning Poroshenko, who was named directly.

The documents specifically reveal that Poroshenko registered an offshore company, Prime Asset Partners Ltd, on Aug. 21, 2014, the day after a decisive defeat by the Ukrainian military against the forces of the Donesk People’s Republic. According to The Guardian: “Records in Cyprus list him as the firm’s only shareholder. They give his official address in Ukraine’s capital, Kiev—apartment 39, Hrushevskoho Street.” Is it coincidence that Poroshenko chartered an offshore assets management corporation the day after it appeared imminent that he faced politically falling out? Or was this an effort to hold onto his massive personal wealth of $720 million? Or both?

Poroshenko made his enormous fortune in the chocolate business, owning the Roshen Confectionary Corporation. In his bid for power, he vowed to sell his share of the Roshen Corporation and dedicate himself entirely to politics in order to fight corruption and “wipe the slate clean.” His promises to fight corruption have elevated the stakes in the aftermath of the Panama Papers’ publication, indisputably exposing Poroshenko to be a hypocrite. Although Poroshenko has dismissed the accusations of corruption claiming he “withdrew from [personal] asset management, transferring those duties to appropriate consulting and law firms” upon becoming president, the Panama Papers show that his assets were simply transferred overseas where they are beyond the reach of Ukrainian taxes. The offshore account therefore appears to be part of an effort to give the impression that Poroshenko is fulfilling his promise to sell out of Roshen while avoiding taxes, as well as to hedge his bets should he find himself on the losing end of the political crisis amidst the civil war.

What Poroshenko has done in office is not to fight corruption but instead personally engage in it. In addition, the Poroshenko administration has focused on prosecuting vicious reprisals against the Ukrainian left by outlawing the Ukrainian Communist Party and other communist and socialist organizations. He has also initiated sell-outs to the IMF and World Bank and compromised Ukrainian sovereignty to the European Union. He has gleefully collaborated with the Svoboda Party—a neo-Nazi party that played a key role in the 2014 coup that helped put Poroshenko in power. He has faithfully executed the mission of the 2014 coup: to fully integrate Ukraine into a pro-EU and pro-U.S. alliance. The United States and Western Europe have long looked to fully incorporate Eastern Europe into the EU and NATO.

A corrupt part of the oligarchy

While his right-wing, pro-billionaire policies suggest Poroshenko to be a corrupt part of the Ukrainian oligarchy, the Panama Papers leave no doubt. Moreover, it reveals the promises to fight corruption as utterly hollow. Poroshenko has become a parody of himself, turning Ukrainian politics into twisted satire: While riding a right-wing coup promising to integrate Ukraine into prosperous Western Europe, Ukrainian billionaires flipped the script on the Ukrainian people and imposed brutal austerity measures as part of the EU’s harsh terms of integration. Poroshenko, feeding off the mass discontent, came to power as an effort to flank popular sentiment, using the soft rhetoric of anti-corruption to imply he would resist the massively unpopular austerity measures imposed by pro-European oligarchs. Once in office, he carried out a bloody civil war of absolutely no value to everyday Ukrainian people now suffering the harsh terms of European integration, while reneging on his populist-sounding campaign promises to sell out of Roshen.

Here in the United States, it is the duty of progressives and democrats to stop the U.S.-led takeover of Ukraine. Poroshenko has essentially acted as the United States’ and EU’s water boy, opening the door to Western investment, offering profits to the same banks that tanked the world economy in 2008. We can join with the Ukrainian people by fighting the U.S. from both sides.