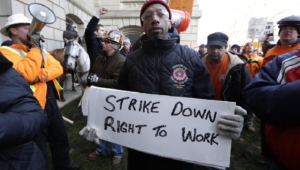 Twenty-eight states have now enacted so-called “right-to-work” laws. These laws prohibit unions from requiring new employees to join the onsite unions and pay dues as a condition of employment. In other words, new workers can enjoy all of the benefits of union membership — better pay, better benefits, safer job sites and better unemployment protection — all hard won over several years but do not have to pay dues or belong to the union. In essence, they get a free ride.

In 2012, Americans for Prosperity worked to pass such legislation in six Kentucky counties. When challenged in federal court, the justices ruled in favor of the counties, setting the stage for Kentucky to later pass a statewide right-to-work law. Now, other counties are investigating similar strategies.

This new ploy is part of a long-term strategy by the U.S. capitalist class. The United States is unique among industrialized countries with capitalist resistance to working class organization relentless and often violent. It is also unique in that its government — at all levels — has worked closely with the capitalist class to help corporations and businesses successfully resist unionization. All three branches of government have used legislation, executive orders and injunctions to defeat strikes and limit organization drives.

The one brief period when unions were able to make significant gains came following the mass struggles of the 1930s when 15 million workers lost their jobs. Under this pressure, reforms intended to save the capitalist system and get people back to work were implemented, leading to a period of limited government support for unions. During the New Deal era of the 1930’s, labor finally gained a legal right to organize through the National Labor Relations Act of 1935. Combined with aggressive and creative organizing drives, union membership grew from less than 2 million in 1930 to 8.5 million in 1940.

As organizations designed to improve and protect workers’ rights, unions also provided a potential avenue for African Americans to press demands for civil rights. Pro-segregation CEOs and business leaders feeling threatened, attempted crush any possibility of unified worker efforts to claim civil rights and the rights granted by the NLRA.

When Republicans regained control of Congress in 1947, they joined with pro-segregation Democrats (“Dixiecrats”) to pass the Labor-Management Relations Act, better known as the Taft-Hartley Act. It was passed over presidential veto. The new law severely restricted the rights of organized labor and gave states the power to pass what came to be erroneously called “right-to-work” laws, fusing anti-unionism with segregationism.

During the post-World War II boom from the 1940s into the 1960s, the American economy ran so strong that the ruling class generally cooperated with unions to ensure continued production. In 1955 organized labor reached its apex — 35 percent of American workers belonged to unions, all of whom were in the private sector.

This positive trend began to wither in the late 1960s, only getting worse in the 1970s when the U.S. economy turned sour for a variety of reasons. A terrible economic development called “stagflation” sent the economy into a long downturn. For workers, this crisis of corporate profitability gave rise to a new ruling class political movement known as neoconservatism aimed at reestablishing corporate power and influence. This movement came to be led by Ronald Reagan and the Republicans. A variety of rightwing and
neoconservative organizations began an aggressive attack on organized labor. Inside the Democratic Party, a “neoliberal” wing went into ascendency, unraveling the once close relationship with organized labor. The result has been several decades of retrenchment by labor. Unions now represent less than 12 percent of the workforce, and almost half are public sector unions. 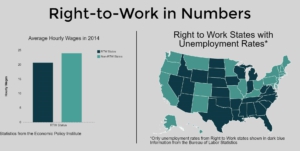 The anti-union trend in New Mexico became most evident last legislative session as neoconservative Governor Susanna Martinez strongly supported a statewide right-to-work bill which failed. Americans for Prosperity quickly stepped in and began to work with two Sandoval County commissioners and with the county executive for Bernalillo County.

At a recent Sandoval County Commission meeting, passions ran high as one commissioner compared unions to the Mafia and claimed that teachers’ unions were destroying education in New Mexico. The Bernalillo county executive has made it clear that he will push similar legislation in the state’s most populous county.

The unifying message among these right-to-work organizations is that unions by demanding such high pay for workers drive up the unemployment rate and discourage corporations from moving to the state, destroying prosperity for everyone.

The reality, of course is that none of this is true. Google very recently began to hire workers for a new operation in Los Lunas New Mexico. There is no co-relation between unemployment rates and right-to-work laws.

Many of the highest rates of unemployment are in states with right-to-work laws. It has never been about prosperity for all, it has always been about more profits for a few. Radicals must join with workers and union leaders to oppose any right-to-work legislation at the state or county level.