On April 25, the People’s Forum in New York City held an in-depth conversation with Jorge Arreaza, Minister of Foreign Affairs of the Bolivarian Republic of Venezuela, as well as Samuel Moncada, Venezuela’s representative to the United Nations. The Foreign Minister recounted the arm-twisting tactics of U.S. ambassadors in countless countries, where they have have threatened to pull IMF loans and trade deals from governments that refuse to recognize the puppet “president” Juan Guaidó. According to Arreaza, only a few countries have been brave enough to speak out publicly against this “extortion,” while others have apologized to him privately in the corridors of the UN. Nearly every Venezuelan military attaché stationed in embassies across the world has been approached with a significant bribe offer from a CIA agent or U.S. military representative, according to Arreaza.

Arreaza reported that Elliott Abrams, Trump’s point man for the Venezuela coup, openly admitted to him that the plan was to create massive economic suffering in the country as a way to stimulate unrest. A Center for Economic and Policy Research report published April 25 estimated that as many as 40,000 Venezuelans have already died on account of the sanctions and the rapid decline of the country’s oil revenue.

While the U.S. ruling class’s desire to obtain Venezuela’s oil reserves is well known, less discussed is the political threat to imperialism that Venezuela has represented throughout the region. Arreaza began his presentation with the history of U.S. hostility to the Bolivarian Revolution — how President Clinton’s initial “wait and see” approach in 1999 was quickly replaced by open antagonism as Hugo Chávez criticized the Afghanistan war, then turned to a broader anti-imperialism and ultimately a socialist horizon.

The presentations were followed by dialogue on the current scenario in Venezuela as well as prospects for peace without further U.S. intervention. 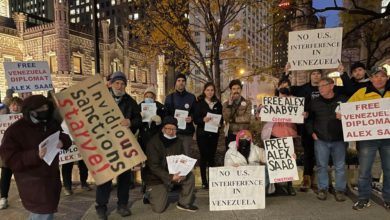