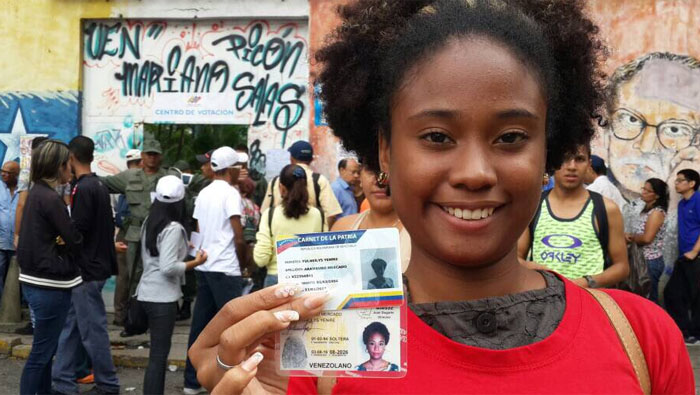 Despite what you are hearing from just about all U.S. media outlets, including the so-called progressive ones, Venezuela had a very successful vote yesterday. Figures from Venezuelan electoral authorities show over 8 million people turned out to vote for delegates to the constituent assembly that will rewrite the constitution and then put it up for approval via a popular referendum. The same process followed in 1999 to establish the first “Bolivarian” constitution that has governed the country so far during the Chavez period.

Any discussion of turnout should first be considered in the context of the previous constituent assembly process in 1999. In 1999 the election to decide whether or not to have an assembly saw a turnout of 37.8 percent. The election for delegates in that assembly had a turnout of 46.2 percent. The final vote to the approve the constitution saw turnout numbers of 44.4 percent.

In that context the 41 percent turnout tracks closely with previous turnout numbers of an analogous process.

The general climate around the election also gives credence to the results of the July 30 vote. In the lead up to the vote we witnessed major threats to the economy of Venezuela from the United States in which President Trump and others constantly repeatedly their willingness to impose additional sanctions. Spain’s newspaper of record El Pais openly called for foreign intervention.

The opposition has engaged in increasingly violent protests, burning down government buildings, erecting roadblocks and murdering supporters of the Maduro government. Many people have been killed by opposition protesters just for being suspected of being pro-socialist, including some who were burned alive. The opposition was openly planning to both blockade and attack polling precincts and prevent people from voting, something they broadcast loudly. Ominously, videos of masked opposition members with assault rifles calling for an armed uprising also appeared not long before the vote.

Considering these facts,  note this: In the 2013 presidential election Nicolas Maduro received 7,587,579 votes. President Chavez when he was re-elected in 2012 got 8,191,132 votes. The official tally of the July 30 election was 8,089,320 votes. In other words the number of voters in this election is similar to previous elections in Venezuela where the opposition boycotts and more casual voters are dissuaded from turning out by threats of violence. In fact, going beyond threats, the opposition did ultimately physically attack hundreds of polling places, and murdered some national guard and policeman guarding the polls.

There are also the inconvenient facts that widespread fraud in Venezuelan elections has never been proven since 1999 despite being often claimed by the opposition. Further, if the polls were so easy to rig, why didn’t the pro-socialist forces rig the elections in 2015’s critical National Assembly vote? Even more to the point, if the elections were such a sham why was the opposition so interested in preventing people from voting?

There is also the matter of whether or not the opposition claims can even be trusted. On July 16 the opposition held their own “consultative” referendum, designed to show that people rejected the constituent assembly process; the government allowed this to go on unmolested.

Even the election observers invited by the opposition, made up heavily of anti-Maduro politicians from Latin America, failed to endorse the opposition’s process, noting the lack of secret balloting, lack of use of voter rolls, the burning of all ballots — preventing election certification — and they noted that essentially all those participating were a part of the opposition already. So to take hear the same opposition claim electoral fraud — and see people take this as the gospel truth — is a little rich.

What is really at stake?

The more important question is why the socialist vote appears to have solidified when the past two elections seemed to show a decline and when the country is currently experiencing serious turmoil? First the overall picture of Venezuela’s economy as a basket-case has always been overplayed.

From 1999 to 2015 GDP increased in Venezuela by 43 percet, the agricultural GDP by 27 percent. In 2015 when shortages in basic goods were reaching the heights GDP was still actually higher than in 2004. Unemployment sunk 62.5 percent between 1999-2015 when it hit its lowest level ever of 6 percent. In just the years 2003-2007 extreme poverty was reduced by 70 percent. The Venezuelan government has also extended health care to the entire population and enshrined it as a right in the 1999 constitution. It has extensively built up a vastly expanded educational system. It has a massive project to make housing a right as well, one that has created 1.7 million low cost homes since just 2011.

While certainly shortages have been and continue to be a factor in certain categories, widespread claims of hunger are, again, exaggerated. As one study notes, “At the end of 2015, Venezuelans were consuming a daily average of 3092 calories, which is well above the FAO’s recommendation of 2720 for food security.”

If anything, anger at the government can be seen not as a sign of a massive decrease in living standards, so much as a sharp break with what had seemed like steady progress in the standard of living since 2003. The government also has not been resting on its laurels but has instituted a new program known as CLAP to help distribute food directly to those who needed it to outflank the rise of a black market.

Further President Maduro instituted a progressive income tax that finances 83 percent of government expenditures. Some 73 percent of the 2017 budget goes towards social programs in areas like housing, health, education, and public works.

In other words the government is helping the poor and working class, at the expense of the wealthy elites.

Venezuela has also established a massive network of communal councils and communes at the local and regional level. These organs of participatory democracy have been building themselves up as a part of the broader Bolivarian project, trying to develop more communal and cooperative, that is socialist, ways of governing society.

There are roughly 46 thousand registered communal councils and roughly 1600 communes. In his book “Building the Commune” author George Ciccariello-Maher gives a flavor of this process:

“Sometimes a commune is sixty women gathered in a room to debate local road construction, berating political leaders in the harshest of terms. Other times it’s a textile collective gathering with local residents to decide what the community needs and how best to produce it. Sometimes it’s a handful of young men on motorcycles hammering out a gang truce, or others broadcasting on a collective radio or TV station. Often it’s hundreds of rural families growing plantains, cacao, coffee or corn while attempting to rebuild their ancestral dignity on the land through a new, collective form.”

The issue isn’t the existence of contradictions and challenges in living standards in Venezuela or in the new organs of popular democracy. What is really at stake is the context in which these contradictions have emerged. Within the constituent process there has been debate over how to approach the particular challenges.

All the various parties and forces involved in the process, however, recognize only a deepening of the Bolivarian process can create the structures that can resolve the various contradictions and challenges arising from attempting to build popular power and continually improve the living standards of the broad mass of the population.

The opposition represents the negation of everything that has happened since 1999. They’ve already touted their plans to roll back social programs, eliminate the regional structures designed to begin combating unequal trading patterns, dismantle new communal organized structures. In other words they want to end any pretense that power should be centered on the people, or that resources be oriented towards their needs.

That is how the lines are drawn. On one side is the chance for another type of world, a bold attempt to fashion a different future. On the other is more of the same race-to-the-bottom economy that we see destroying lives across the globe.