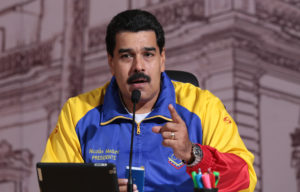 Warning of a growing danger by the right-wing opposition’s attempts to overthrow Venezuelan President Nicolás Maduro, he and other leaders of the United Socialist Party of Venezuela (PSUV) have issued a call for a giant rally of the people on April 19 to counter a planned right-wing rally.

Alerting to the danger, in a rally of thousands of militia and soldiers to salute the seventh anniversary of the Bolivarian Militias of Venezuela, Maduro said, “If you hear news that the traitors are trying to carry out a coup d’etat, come out and take the power of the Republic, the same as the 13th.” The 13th is in reference to April 13, 2002, when tens of thousands of people restored Hugo Chávez to his presidency after a failed two-day coup.

Maduro announced a plan to increase the militias to 500,000, under the command of the Bolivarian National Armed Forces (FANB), “and equip each of them, including a rifle.” Defense Minister Vladimir Padrino López declared, “The FANB ratifies its unconditional loyalty to the constitutional presidency of the Bolivarian Republic of Venezuela, our commander-in-chief Nicolás Maduro.”

Today, many of the same capitalist opposition leaders involved in the 2002 coup plots are once again activating their reactionary base of support to take to the streets demanding regime change.

Violent confrontations by extremist elements of the right-wing opposition against pro-government supporters and state security forces have already resulted in a number of deaths. The protests bear a resemblance to the 2014 attacks that left 43 dead and hundreds injured in the aftermath of the December 2013 elections.

Their intent was to disregard President Maduro’s legitimacy and the constitutionality of his administration, and try to pave the way towards his removal.

Several years of intense economic war by the largest Venezuelan corporations that dominate the import market of food, essential household goods and appliances have led to extremely high inflation and shortages. In turn, the discontent in the population has provided fuel for the opposition and led to a right-wing majority in the National Assembly elections in 2015.

The most recent opposition protests began after a March 29 decision by the pro-Bolivarian Supreme Court of Justice (TSJ) to take over the legislative functions of the National Assembly, which had been declared in contempt of court since July of 2016. The TSJ ruled that the National Assembly failed on multiple occasions to remove three opposition legislators from the state of Amazonas who are accused of buying votes during the 2015 elections.

Although the Supreme Court reversed its March 29 action due to strong opposition, the right-wing immediately took to social media and the international press to denounce Maduro’s government. It became the pretext for the latest wave of violent attacks.

The opposition has set fire to the Supreme Court and damaged other buildings associated with state-run institutions and hurled rocks and other projectiles at police, security forces and even President Maduro. They fired shots at residents of the Ali Primera Socialist City commune that was established for low-income citizens by the Bolivarian Revolution in 2014. A 13-year-old resident, Bryan Principal, was killed as a result of the gunfire.

Opposition aided by Washington and the OAS

The recent surge in calls for regime change follow the abandonment of a Vatican-brokered dialogue by the coalition of opposition groups known as the Democratic Unity Roundtable (MUD) on January 26.

Then on Feb. 8, 34 members of the U.S. Congress signed a letter to President Trump demanding increased sanctions against Venezuelan officials for alleged corruption and human rights violations. The hit piece is signed by extremists known for anti-Cuba and anti-Venezuela positions, including Ileana Ros-Lehtinen, Mario Díaz-Balart, Robert Meléndez, Ted Cruz, Mark Meadows and Dana Rohrabacher, among others.

In an attempt to smear PSUV leaders and justify the U.S. sanctions, Vice President Tarek El Aissami was falsely accused by the same U.S. congress members of drug trafficking. Previously, PSUV Vice President Diosdado Cabello was similarly accused. No proof or evidence was ever presented in either case.

On Feb. 15 Trump hosted Lilian Tintori, a well-known opposition figure with the Popular Will Party (Voluntad Popular) whose husband, Leopoldo López, is among the jailed fascists responsible for inciting violence in 2014. Trump later tweeted that “Venezuela should allow Leopoldo López, a political prisoner … out of prison immediately,” alongside a picture of himself with Vice President Pence, Florida Senator Marco Rubio, and Tintori.

In early March, Rubio and other senators called on the Organization of American States to “evoke the Democratic Charter” and expel Venezuela from the regional body. OAS Secretary General Luis Almagro, an open supporter of Washington’s schemes and the Venezuelan opposition, reiterated the opposition’s demand that Venezuela’s presidential elections scheduled for 2018 be moved ahead to take place in 2017.

An illegal session of the OAS Permanent Council met on April 3 where representatives from the U.S., Canada and several Latin American right-wing governments including Argentina, Brazil and Mexico unsuccessfully attempted to impose their will over member states sympathetic to the democratically elected Maduro administration.

According to the Bolivarian Embassy in Washington, such an action “would undermine the legitimacy of the Venezuelan government and therefore trigger a series of violent actions in Venezuela.” The resolution failed for lack of sufficient votes.

Almagro’s obsession with Venezuela while overlooking the blatant legislative coups and repression in Brazil, and state-sanctioned violence in Colombia, Honduras and Mexico against activists, journalists, and community leaders, reveals his subservience to the dictates of the United States.

In an April 6 report released by the U.S. Military’s Southern Command, the leading commander states the potential necessity of a “regional response” in Venezuela to combat the “growing humanitarian crisis … due to widespread food and medicine shortages; continued political uncertainty; and a worsening economic situation.”

It is ironic that the Pentagon would concern itself with the Venezuelan people’s economic conditions, when millions of people in the United States suffer hunger, homelessness and lack of health care due to the gargantuan U.S. military budget and its militarism.

The United States call for a regional response against Venezuela is not only a violation of the country’s sovereignty. It also shows a weakness of the opposition, notwithstanding its violent tactics and dangerous threat to the Bolivarian process.

The opposition has failed to present a viable program of economic and social stability and well being for the vast majority of Venezuelans, because what the right-wing seeks is a return to the time when they, the 1%, ruled with complete domination.

This is why the right-wing Venezuelan opposition of extremist groups and capitalist class is relying more and more on U.S. imperialism for influence and intervention.

Opposition figures inside Venezuela are even taking cues from the recent U.S. aggression against Syria to call for “humanitarian” intervention against their own country. David Smolansky, mayor of El Hatillo municipality and coordinator with Popular Will, accused the Maduro government in a tweet of using chemical weapons to quell protests, making mention of Syria.

Recent polling from the independent firm Hinterlaces reveals that 55 percent of Venezuelans do not believe in pursuing regime change as a viable strategy for progress, but would rather see a peaceful resolution to resolving the country’s economic problems.

It is in the hands of the Venezuelan people to determine their path forward, not for Washington to dictate. And it is for the progressive forces in the United States and worldwide to stand with the Bolivarian government and people. 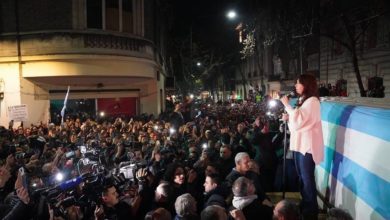