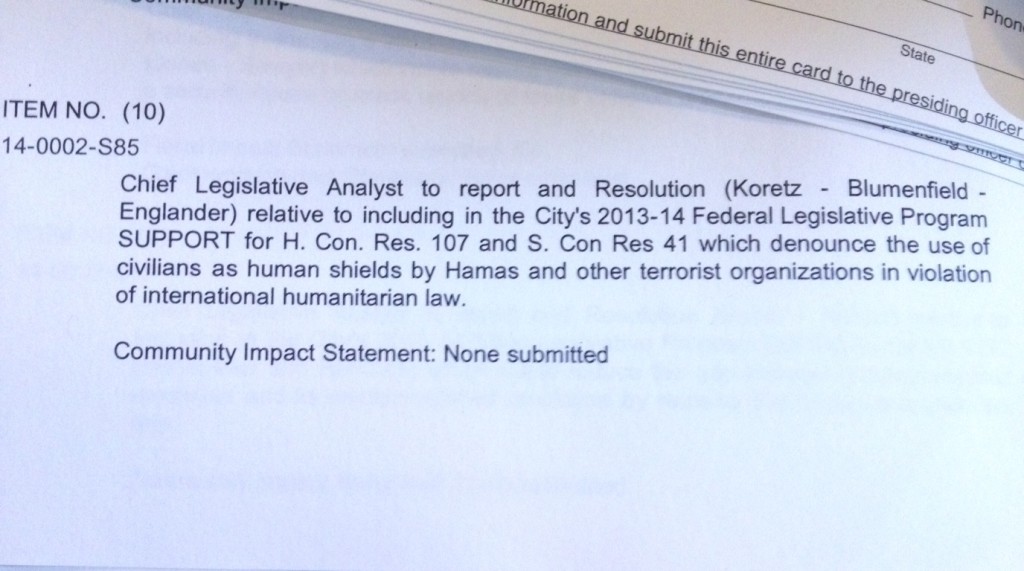 On August 15, the Los Angeles City Council was prepared to pass a resolution echoing the propaganda whitewashing the massacre in Gaza.  The resolution, introduced by Los Angeles City Councilmen Bob Blumenfield, Paul Koretz and Mitch Englander, states its purpose is to “denounce the use of civilians as human shields by Hamas and other terrorist organizations in violation of international humanitarian law.”

It did not contain a single word about the flagrant war crimes committed by the Israeli military.

If passed, the resolution would have codified the local government’s open support for the narrative presented by Israel and its apologists, which puts the blame for all civilian deaths in Gaza on Hamas and other resistance forces. This claim turns reality on its head, as the overwhelming majority of the people of world and international human rights organizations have proven that Israel has committed undeniable war crimes in its latest genocidal assault on Gaza.

Within one day of learning about the resolution, the quick mobilization of Palestinian solidarity activists by the National Lawyers Guild and ANSWER Coalition left the Los Angeles City Council unable to pass the resolution.

Dozens of pro-Palestine protesters picketed outside City Hall before it opened, then entered the chambers and signed up for public comments. This strong show of support for Palestine included dozens of speakers that condemned the local government for attempting to whitewash war crimes in the name of Angelenos, thousands of whom have spent the past month marching against Israel’s massacre of civilians in Gaza.

Jim Lafferty, executive director of the National Lawyers Guild in LA, stated at the meeting: “This resolution is turning truth on its head. It includes assertions that have already been debunked, and excludes actual documented violations of international humanitarian law by the Israeli government.”

ANSWER Coalition organizer Mike Prysner also spoke during public comments, saying: “The whole world is watching the massacre in Gaza, which will go down in history as a great crime against humanity. If you pass this resolution, you will be sealing your place in history too–on the side of these great crimes.”

Not even one person spoke in favor of the resolution. It highlighted exactly how isolated the local government was in its uncritical support for the Israeli assault on the Palestinian people. This isolation mirrors the isolation of the U.S. government, that continues to arm and support Israel while millions march worldwide against it.

As a result, the leading council member of the Rules committee informed protesters that the resolution would not be brought to a general meeting and that they had no plan to attempt to bring the item to a vote, leaving it dead in the legal process.

Without the mobilization of Palestine solidarity activists, this resolution would have likely passed quietly through the City Council, adding one more official seal of approval to the Gaza massacre.

This resolution, however, could be brought up again in the future–but those at the action vowed to monitor any sign of that happening, and to mobilize again to defeat it.