Students from Rancho Buena Vista High School organized a sit-in at Vista City Hall Sept. 27 to demand a stronger climate action plan. Close to a hundred people attended, most under the age of 18.

Vista has a Climate Action Plan, which is required by California law, but it has not been implemented. According to organizer of the sit-in Leana Cortez:  “[The plan] was written in 2012. Nothing. We’re in 2019, almost 2020. Still nothing. We do have problems with the plan overall, It’s a little bit diluted. However, I think our biggest concern is that it hasn’t been implemented, because we are running out of time.”

The situation is dire, and young people are afraid that they are planning for a future that does not exist. Student Paula Mendoza told Liberation News: “I have been getting a lot of anxiety thinking about my future 12 years from now. I started filling out [college] applications and I thought, ‘is it going to matter that I’m signing up for my college applications when my future is at stake?’”

Millions of young people are mobilizing for action and are now at the front lines of this struggle. “It is our future. And I think we’ve had this kind of awakening through people like Greta Thunberg and other environmental activists. We’ve seen youth start to get involved, and I think that’s inspired the rest of us to follow suit,” says Cortez.

Young people are starting to see the connection between climate change and a global economic system that prioritizes profit over the well-being of people. Even though the science has been clear for decades, emissions have continued to rise. There has been no substantial effort to change because that would hurt profits. Most efforts, like the Paris Agreement, have been similar to the Vista Climate Action Plan: symbolic.

Many see capitalism as part of the problem but are hesitant to call themselves socialists. “Capitalism contributes to all of this” says Paula Mendoza, “I never really thought about socialism because I know that we live in America where there’s a stigma around communism, socialism and anything that isn’t capitalism.”

There are others who go even further. One of the organizers, high school senior Sean Damon, told Liberation News, “I’m very frustrated that people aren’t realizing the real causes of this. Capitalism is one of the main causes of this. It is a class war and many people don’t want to believe that or they think it’s too radical.”

The youth movement is growing and will continue to grow as climate change continues to threaten our survival. In the coming years and decades, climate change will be a force to be reckoned with. Young people will have no choice but to face this existential crisis. At this moment, it is still largely a movement that fits into the confines of the Democratic Party and mainstream capitalist politics, but most likely not for long.

The Democratic Party has been ineffective at solving this crisis. As a capitalist party, its main constituents are the wealthy owners of corporations. Enough is enough. In the words of Greta Thunberg:  “We are at the beginning of a mass extinction, and all you can talk about is money and fairy tales of eternal economic growth. How dare you!”

The students at Buena Vista are going to continue pressuring the Vista City Council to implement a strong climate action plan. For more information about the student climate movement in Vista you can visit their Instagram: rbvgenerationgreen Byhalia Pipeline protest: ‘We do not want this pipeline’ 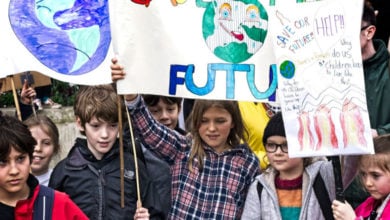 Record breaking heat in November: What can we do about the climate crisis?