On Sept. 29, hundreds of workers from the Martin Luther King Jr. Country Labor Council, Carpenters Local 30, the Washington Federation of State Employees, the Coalition of Black Trade Unionists and the Organized Workers for Labor Solidarity demonstrated in Bellevue, Washington to protest the advocacy of “right to work” laws and union-busting activities of the right-wing advocacy group Freedom Foundation.

Singing union songs, chanting slogans and marching in a picket line, the union workers had chosen to convene at 7th Avenue and Bellevue St, below the buildings where their bosses and CEOs were making plans to weaken union power and lower wages. “What is ‘right to work’? Right to work for less!” This proclamation by an OWLS organizer was met with a chorus of applause from the estimated 500 assembled picketers. 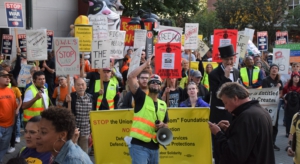 The demonstration was called in defiance of the attempts by Freedom Foundation and various employers to collect and utilize the personal information of individual workers and union members, for the purpose of spreading disinformation and fostering anti-union sentiment. Gill, a longtime organizer with OWLS, elaborated on these strategies. “They’ve been going to people’s houses, encouraging them to leave their unions and telling them that they will save money by not having to pay dues. The goal is to chip away at the power of unions by having members resign and forfeit their own hard-won, hard-fought power”.

The Freedom Foundation is a far-right-wing organization dedicated to the destruction of unions in the U.S. Composed of the ruling echelons of major U.S. corporations, it is also intimately tied to the Trump administration, and boasts representatives like Andrew Puzder who was considered and then rejected as Secretary of Labor, due to a massive outcry over his extreme anti-worker policies.  The FF, is tying to break up and bankrupt public and private sector unions, unapologetically opposes the minimum wage, pushes for automation to avoid “race and sex discrimination cases,”and stands as staunch supporters of Trump’s program which it claims will “bring back jobs.”

Worker, however, are not fooled by the FF. Dolly, a senior representative of the Washington Federation of State Employees Local 304, pointed out that the promises of returning jobs was not only not happening, but that the quality, reliability and pay of many new jobs was completely inadequate. “They’re not going to bring back jobs that can pay for a family. Nowadays it takes more than $15 an hour to live and take care of your family here. What good are jobs if we can’t live off them?”

As the demonstration drew to a close, Becca Ritchie of the Washington Bad Ass Teachers association called attention to another demonstration set to protest the coming visit of notorious Secretary of Education Betsy DeVos to Bellevue on October 13. Judging from the jeers, gestures and shouts from the crowd, everyone present was enthusiastic about making a defiant demonstration in the upcoming action. “We’re up to the challenges of this administration; absolutely!” concluded Gill. “This is one of the biggest turnouts we’ve had in recent years. And even if it’s just a couple hundred of us, we won’t quit. We’ll never stop fighting for working people.” As for fellow workers who support Trump, Dolly had this to say. “You have to use your intelligence and common sense. Find out what they’re really offering you, and where their selfish interests really are, and you will see that these CEOs and fat cats don’t offer you anything. Be smart.”