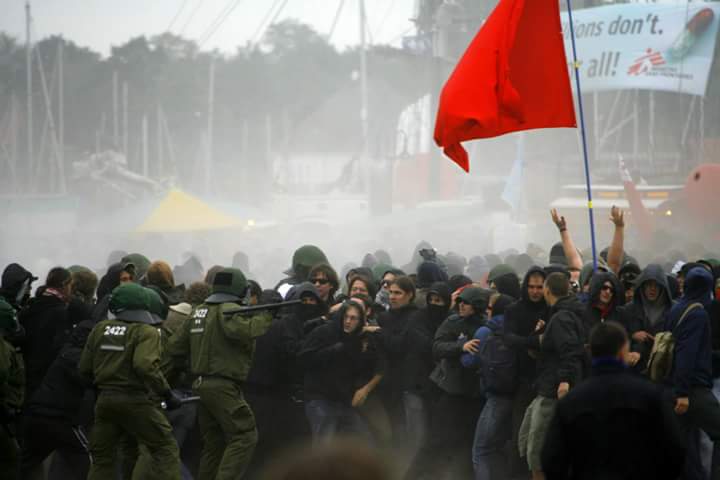 On July 7 and 8, anti-capitalist protesters descended upon Hamburg, Germany in opposition to the G20 Summit. “Welcome to Hell” was their slogan to greet the leaders of 20 of the world’s leading economies.

It should be remembered that within the G20 is the G7, of which Russia was suspended from for its role in Crimea and the Ukraine where the United States and western imperialist forces are fully supporting neo-Nazi forces and far-right reactionary groupings.

The slogan “Welcome to Hell” was directed at the G20 leaders and their reactionary policies. As protest organizer Andreas Bleschmidt claimed, “It’s a combative message … but it’s also meant to symbolize that the G20 policies worldwide are responsible for hellish conditions like hunger, war and the climate disaster.”

G20 and the slow collapse of unipolarity

A few days before the G20 “Welcome to Hell” protests in Hamburg, U.S. Pres. Donald Trump made the statement in Warsaw that: “The fundamental question of our time is whether the West has the will to survive.”

Trump’s statement was not made in a political vacuum. With the rise of ultra-right nationalist and fascistic trends in the western political establishments, his questioning whether “the West” (i.e. imperialism) has the “will” to survive, is just a dog whistle plea meant to stoke western imperial chauvinism. In the same speech he posed the questions, “Do we have the confidence in our values to defend them at any cost? Do we have enough respect for our citizens to protect our borders? Do we have the desire and the courage to preserve our civilization in the face of those who would subvert and destroy it?”

So called “western values” mean profit at the expense of the rest of humanity; they are imperialist values which Trump is trying to tap into.

But make no mistake, the world is being “subverted” and there are groups out to “destroy” it, but they are not the imaginary bogeymen which Trump is trying to conjure up. The enemy itself is the West which represents the primary contradiction of our era: imperialism and national oppression. The justifications for capitalist/imperialist “globalization” are cracking; the rise of far right-wing  “anti-establishment” politics rest on the backdrop of an actually decaying social order. Global capitalism is in rapid decline, the planet and all life on it is at stake; the rise of the right must be challenged by the global anti-capitalist/imperialist and anti-colonial forces.

Trump and his ilk are mad that the post-Soviet, unipolar era is cracking. The rise of formerly oppressed nations like Brazil, India, Russia, China, and South Africa threatens U.S. monopoly finance capital. The Democratic People’s Republic of Korea remains defiantly opposed to U.S. imperialism by building its self-defense capacity, socialist Cuba refuses to bow to bullying from the U.S. and asserts its sovereignty and independence (they still hold our sister comrade Assata Shakur safe!), and Trump’s refusal to sign the Paris Agreements have isolated the U.S. on a global scale amidst these shifting relations of power in the global class struggle.

The 100,000 people who gathered July 6 to 9 in Hamburg to protest the G20 Summit emphatically stated their broadly anti-capitalist and democratic views. A statement by the NoG20 group which helped organize the mass demonstrations said, “The politics of neoliberalism and war is decided in the heart of our cities, closed off to citizens, protected by a militarized police force and backed up by the suspension of political rights. This shutting-down of democracy has one purpose only: to defend the indefensible. Our demonstrations speak for and of a different world. …we call for the defence of basic civil and political liberties currently being denied: the right to protest, the freedom of assembly, the freedom of movement.”

In the wake of recent terror attacks in the U.K., the ruling class elites in the West have used this as an opportunity to bolster the repressive arms of the state in the name of “counter-terrorism.”

The character of the protest was laid out further in the NoG20 statement as it focused on system change: “Our demonstrations speak for and of a different world: One, which is not driven by the logics of racism, misogyny, homophobia and the fear of difference, a world that takes the huge climate changes caused by human action seriously while meeting health, educational and social needs today. We reject a world in which a sports shoe can cross the Mediterranean while people drown. We speak for different cities: Cities, which are not hollowed out by real-estate speculation and the privatisation of public services, cities, which are lively and diverse, where people can disagree freely and express their own hopes for a better world, cities like the Hamburg we know and love.”

Despite the rhetoric of neoliberal capitalism (that the state’s role in society would shrink and allow for less government intervention), the 2008 crisis and subsequent build up of the police state proved otherwise. It was the United States and other European imperialist states, and their lackeys, that bailed out the big banks with public monies and initiated widespread repression of the Occupy Movement and the massive surveillance of activists in the Black Lives Matter movement.

The G20 brought out these contradictions for all to witness. The mainstream corporate media focused on the violent clashes between protesters and the police forces, which were corralled from all over Germany (20,000 of them) to suppress activists demanding “a better world” for the many and not the tiny super rich elite.

We commend the brave activists who confronted the armed forces of the state during such a crucial gathering of some of the heads of the foremost imperialist nations.

At the end of the protests of the army of 20,000 police officers, 476 were reported to have suffered injuries such as cuts and burns from fireworks and eye damage from laser pointers. In addition, 186 people were arrested and 225 were taken into custody by the police. Allies of the Angela Merkel government have used this opportunity to flap their gums about “violence” and “left wing extremism” when their nation continues to exploit and oppress people in the formerly-colonized world such as Syria, Libya, and Yemen. As one protester Stefan Hubert, a 32-year old graphic designer, remarked “It’s ridiculous that police say some of us are violent when starting tomorrow the leaders of the world’s largest weapons exporting and importing nations will be arriving in our city.” (Reuters)

Following the protests German justice minister Heiko Maas, of Angela Merkel’s SPD coalition, stated that more money is needed from the federal government to prevent so called “left wing extremism.” Maas described the protesters as “anti-social” and “hard criminals,” as well as having “committed serious crimes in Hamburg, including attempted murder.” Like a constant feedback loop, the state threatens to and takes steps to tighten its security apparatuses in the wake of such wanton actions.

As Black revolutionary Walter Rodney once asked, “By what standard of morality can the violence used by the slave to break his chains be considered the same as the violence of his slavemaster?” Without having to endorse every tactic employed, one should reject this false equivalency to terrorism.

The “hundreds of anti-capitalist militants” who torched cars, looted shops, and threw molotov cocktails are not the main problem; the lack of a coherent alternative to neoliberalism is. Every year the G20 Summit is opposed by hundreds of thousands if not millions across the world. However, it will take more than a few days of protests, molotov cocktails, and destruction of property to stop the capitalist imperialist death machine.

What will it take for another world to be more than “possible,” to become a reality?

To move to another world being “possible” we must return to the past tradition of revolutionary socialism based on the dire necessity of communism. In order for “another world” to be born, the working class and oppressed must have a political party — an advanced detachment of the working class and oppressed — to concentrate all the necessary political forces to overthrow the bourgeoisie and begin building socialism. Protests may come and go and in and of themselves do not lead to revolution. After people have gone home, it is the Party that continues the day-to-day work of building for socialist revolution.

Imperialism is in rapid decay and quasi-fascist and outright fascist social formations are strengthening themselves all over Europe and North America. The task for revolutionaries today is enormous, but with a revolutionary communist party, Marxism-Leninism, and the incipient mass struggles around water rights, environmentalism, racism and more, the ingredients are there for a rupture with the current neoliberal order.