On Jan. 26, Enrique Peña Nieto, stated in video message on Twitter, “I regret and disapprove of the decision by the United States to continue the construction of the wall which for years, far from uniting us, has divided us. Mexico does not believe in walls.” He further stated, “I have asked the Foreign Affairs Ministry to strengthen measures to protect our nationals.” The statement led several days later to the cancelling of the scheduled meeting between Enrique Peña Nieto and Donald Trump.

The Trump Agenda is an extreme manifestation of white supremacy, bigotry, imperial arrogance and anti-worker politics. It is so extreme that even the most comprador bourgeoisie of Mexico, represented by a president who has a 12% approval rating, had to say something.

From the theft of half of its territory in 1848, to the occupation of the port of Veracruz in 1914, to the takeover of Mexico’s economy through NAFTA signed in 1994, to the flooding of weapons and support of drug trafficking by the Drug Enforcement Agency, the U.S. empire has had, putting it lightly, a precarious relationship with its southern neighbor. With capitalism’s global turn towards the neo-liberal model in the 1980s, Mexico’s bourgeoisie was more than happy to sell out the country’s vast resources to world capitalist interests, especially U.S. corporations, in order to make a quick buck. The most egregious example of this was the signing of the North American Free Trade Agreement by the notoriously corrupt PRI (Institutional Revolutionary Party – Peña Nieto’s Party) president Carlos Salinas de Gortari.

Prior to 1994, it was estimated that around 2 million Mexican immigrants had crossed “illegally” into the United States. More than 20 years later, that number is estimated to be anywhere between 10-12 million Mexican immigrants. Not only did NAFTA cause the violent displacement of millions of people, it also forced upon Mexico, a developing country with vast mineral resources, extreme poverty.

Subsequent presidents, from Vicente Fox of PAN (National Action Party), who broke the decades-long rule of the PRI, to Felipe Calderon, also from PAN who launched a violent war against drug cartels which led to the mass killing of civilians, have continued to strengthen the economic and military ties with their masters to the North.

The effects of this relationship upon the Mexican working class on both sides of the border is clear. An extensive report by CONEVAL (Consejo Nacional de Evaluacion de la Politica de Desarrollo Social), a government institution in Mexico that studies the political and social development of the population, reported that in 2015, 46.2 percent of Mexicans lived in poverty. This amounted to over 55.3 million people who did not have access to nutritional and non-nutritional goods that are considered basic. Those considered to live under “extreme poverty,” meaning that they lack access to basic nutrition, were 9.4 percent of the population or 11.4 million people.

According to a recent report to the Mexican Congress by the Deputy’s Office of Economic Analysis, which analyzed the changes in remittances between Jan. 2007 and March 2011, the amount of remittances sent back to Mexico by immigrant workers between this period totaled $98.8 billion. In 2007 alone, Mexico’s economy received a little over $26 billion.

Combined, Mexican labor contributes $635 billion per year, which constitutes 5% of U.S. GDP and 60% of Mexico’s GDP. Undocumented immigrants alone contribute over $200 billion to the U.S. economy. Solely on the issue of taxes, undocumented immigrants, according the Institute on Taxation and Economic Policy, paid $11.4 billion in taxes last year. Compare this to giant corporations that pay very little to no federal taxes.

On both sides of the border it is the workers who pay the price of U.S. imperialism. Mexican workers work to the bone and it is their exploiters that reap the profit.

Mexico’s comprador bourgeoisie and the struggle for self-determination

When Vicente Fox started flipping-off “el Trompas” (popular naming of Trump which literally means “car horn”), media outlets made him a symbol of Mexican resistance towards Trump’s demagogic attempt to make Mexico pay for the Wall. While any flipping-off of Trump should be celebrated, Vicente Fox, the former PAN president of Mexico from 2000 to 2006, is no different than the rest of the comprador ruling class which have sought to deepen the relationships with Yankee imperialism.

Fox, the former supervisor of Coca-Cola Mexico, also received a diploma in Management Skills from Harvard Business School. During his presidency, Coca-Cola Mexico became that country’s top selling soft drink. In an unprecedented act, Fox told the late-Cuban revolutionary leader Fidel Castro to limit his comments against the U.S. government at a U.N. meeting held in Mexico and leave as soon as he had finished his meal. Cuba and Mexico have historically had friendly relations, but Vicente Fox made it clear that he didn’t want his partnership with the United States tarnished.

Similar to Trump, the current president of Mexico, Enrique Peña Nieto, was inaugurated with protest across the country. Sparking the #YoSoy132 student movement, Peña Nieto’s dismissal of the real anger in the streets against his and the ruling class’ attempt to privatize education and the national resources of the country through “Plan Mexico” only added fuel to the fire.

Then, on Sept. 26, 2014, the mass kidnapping and disappearance of 43 students from the Ayotzinapa Rural Teachers’ College caused a major national and international uproar that led to a major destabilization of the PRI government. From mass actions by teachers, unions, and the recent protests against the rise of gasoline prices known as the “Gasolinazo,” the people of Mexico are resisting their own government’s oppressive policies.

It is in this context that the spineless comprador bourgeoisie is trying to rally support against Trump. It is a purely opportunistic attempt to distract the working class of Mexico in order to continue privatizing the Mexican economy. We must be clear, the people’s resistance will not be led by those who have sold out Mexico for so long. It must be led by those fighting for justice for the students of Ayotzinapa, the unions of Oaxaca and Guerrero, the indigenous councils, the Zapatistas, the mass student movements and all left revolutionaries who demand full self-determination for the Mexican people.

Mexican workers, their descendants and the vast diaspora of La Raza need to fight the continual humiliation suffered under Trump and U.S. imperialism. We must oppose the U.S.-Mexico border wall and Trump’s attempts to expand it. We must unite our cross-border struggle against capitalism and for a worker’s revolution that can finally put an end to the historic injustices against the Mexican people. ¡Fuera Trump! ¡Fuera Nieto! ¡Viva la resistencia de nuestros pueblos! 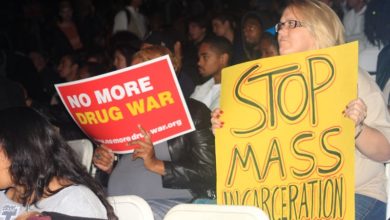