Which way can save the planet: Cuba’s socialist planning or the ‘magic of the marketplace?’

By Judi Yang and Joyce Chediac 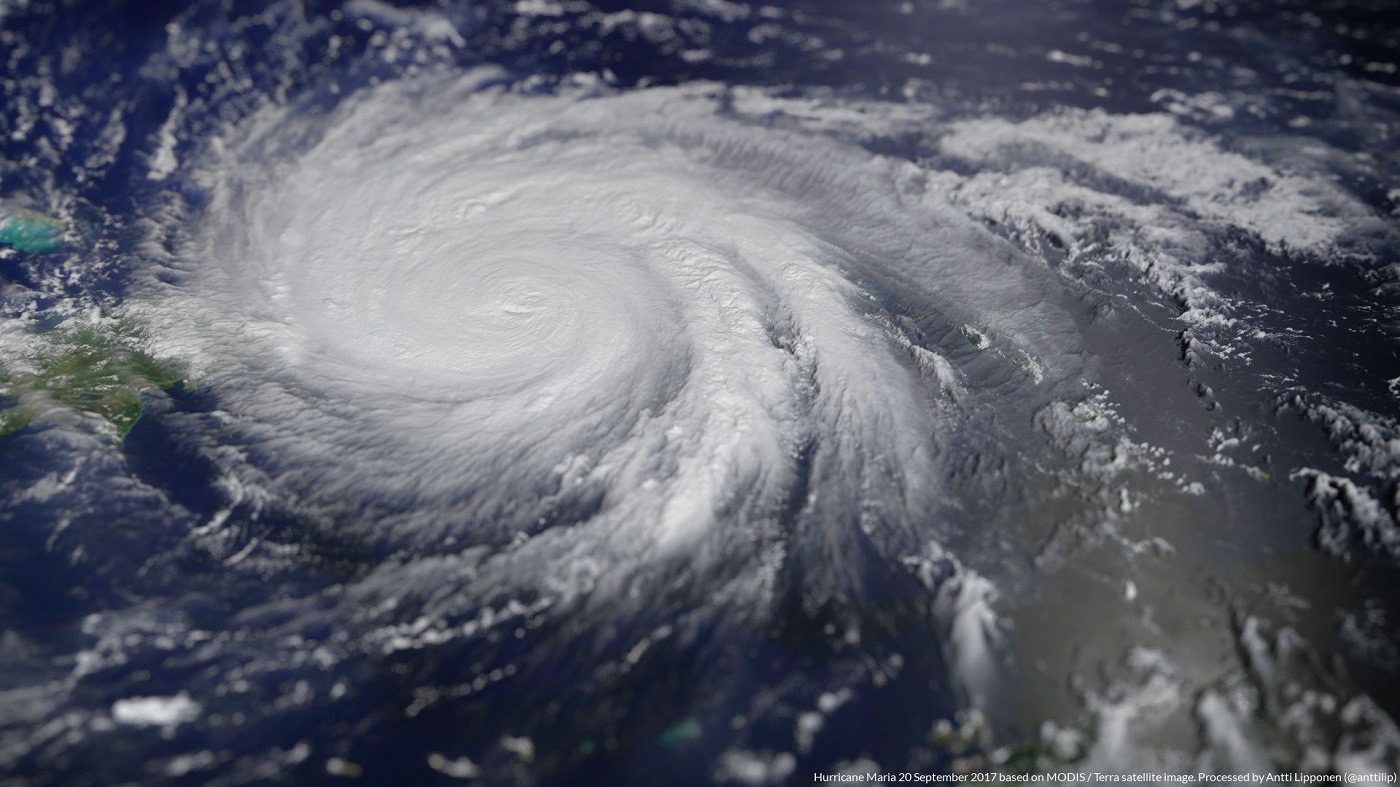 Hurricane Maria, the giant storm which hit the Caribbean in 2017. Photo: commons.wikimedia.org

This month Cuban celebrates the  60th anniversary of its 1959 revolution and a government committed to building socialism. Blockaded and sanctioned all that time by the U.S. behemoth just 90 miles away, it is a major accomplishment that this small island nation of 11 million people has survived.

But Cuba has not just survived. With few resources, it has become the world’s role model for how to reduce carbon emissions, reduce atmospheric temperatures and prepare its people, army, and civil defense forces for cataclysmic natural disasters, such as severe hurricanes or tornadoes.

An extraordinary report was recently issued by the UN’s Intergovernmental Panel on Climate Change, urgently calling for swift reductions in fossil fuel use by 2030 to avoid the worst consequences of climate change, which it said are approaching much faster than anyone had thought.

The planet is heating up, mainly due to more carbon dioxide, and other man-made emissions in the atmosphere. Rising ocean temperatures and increased acidity are triggering mass die-offs and rising sea levels. Further consequences are more frequent extreme weather events, such as hurricanes, tornadoes, earthquakes, and tsunamis, with extreme weather events now accounting for 77  percent of total economic losses, $2.245 trillion, the report notes.

The impact is disproportional. According to a report by the UN Office for Disaster Risk Reduction (UNISDR), people in low- and middle-income countries are seven times more likely to die from natural disasters than those in developed nations.

Which way to go?

The U.S. has much wealth and an abundance of resources. If Washington and Wall Street put time, money and effort into eliminating carbon emissions here it would make a huge difference, and other major powers would follow suit. The pressing environmental issues present an opportunity to prove what corporate America has long maintained – the “magic of the marketplace,” i.e., unfettered industry for profit, drives human advancement, and is beneficial for all.

When push comes to shove, however, rising sea levels, increasing ocean and atmospheric temperatures, and record extreme weather patterns are not a major concern to a capitalist economic system where corporations’ profit margins are the priority.

Since the start of his presidency, Donald Trump and his advisers have only shown disdain for the findings of climate change scientists, often amplifying the voices of climate change deniers. The Trump administration has refused to endorse the recent UN climate change report, will not honor commitments for emission reductions made in the 2015 Paris Climate Agreement, and is dismantling existing climate-protecting legislation as quickly as it can.

And capitalism’s for-profit  “solutions” to climate warming have been shown to actually be part of the problem. For example, Secretary of State Hillary Clinton circled the globe advocating extraction of natural gas by U.S. companies via fracking, claiming that it was  “clean” energy.  The truth fracking is nothing close to clean: toxic chemicals used in fracking contaminates groundwater while the extraction process causes earthquakes, releases methane gasses that are more climate warming than carbon dioxide and in general takes a toll on public health and the ecosystem.

In the last few years, Cuba has installed 11 mw of wind power and 24 mw of solar power. As a contribution to the Paris Climate Agreement, Cuba agreed to install more than 2,000 mw of renewable generation sources, with 24 percent of their electricity sector to be form renewable sources by 2030.

Cuba has stepped up reforestation, nearly doubling the island’s forested area to 30 percent in 2018, and has the healthiest coral reef system in the Caribbean due to decades of conservation and restoration efforts.

The government implemented land reforms and encouraged small farms and farming cooperatives. Food production is decentralized when possible. Small-scale organic production in urban and suburban agriculture near where people live accounts for around 60 percent of vegetables eaten by the population, dramatically decreasing energy required for transport and storage.

There are local service centers containing the stores, health services and schools Cubans need in their everyday lives. This means that people can walk to meet their essential needs rather than using public transportation or needing to own a car.

For local transport, the government imported a million bicycles from China. A taxi in Cuba can take many forms – from bicycle and motor rickshaws to horse carts to vintage cars. Animal carts sometimes transport fertilizer for urban agriculture. Cuba has a high percentage of people who walk from place to place.

Everything that can be is recycled is.  There’s little waste and the lifespan of products is extended well beyond what would be considered possible in the United States’ throw-away society. Due to the blockade, disposable income hardly exists, and, to the shock of many Western visitors, imported consumer goods are prohibitively expensive. While Cuba lacks material goods, its society is known for its friendliness and sense of community.

Some apologists for capitalism argue that the world’s people, especially those in the West, has grown accustomed to all the conveniences associated with high carbon emissions, and to change this would severely impact on quality of life. But Cuba is able to do all that it does without a drastic effect on the quality of life of its people.

Why? Because the Cuban government makes sure that all people’s basic needs are met. It has a free national health care system focused on preventative medicine, subsidized medications, one of the highest doctor-to-patient ratios in the world, and an infant mortality rate of 4.4 deaths per 1,000 live births, lower than that of the U.S.

Education on all levels is free and literacy stands at 99.75 percent. All Cubans have enough to eat through the monthly ration program for staple foods and a cap on food prices.

Rent is no more than 10 percent of income and 85 percent of the people are homeowners. Houses can be exchanged, but not sold for a profit. Electricity, telephone, gas and water are subsidized. There is no homelessness.

Having one’s basic needs met opens the door to a sense of community and neighborly concern that goes a long way in another form of Cuban conservation – hurricane preparedness. Cuba has been cited by the International Federation of the Red Cross and Red Crescent Societies and the United Nations as a global model for hurricane risk reduction. This preparedness involves the whole population and even Cuban children know what to do.

While 2016’s Hurricane Matthew killed 44 people in the United States, it killed no one in Cuba, despite causing much destruction. Hurricane Katrina left as many as 1,800 people dead in the U.S. In 2008, Hurricanes Gustav and Ike pummeled Cuba at the peak of their intensity killing seven. But in the U.S., 30 people died, even though the storm had lost much of its strength. In 2003, Hurricane Isabel killed more in the U.S. than six major hurricanes did in Cuba from 1996 and 2002.

Everyone has a role to play

Cuba’s preparedness is attributed to its government’s civil defense forces instilling disaster preparedness on a daily basis and the mobilization of the entire population to help as needed.

Every capable citizen has a role to play in disaster preparedness. It’s not a voluntary task. Cuban citizens share a sense of duty and determination to protect their island nation, not just from foreign invaders, but also from natural disasters that can destroy crops and infrastructure.

With an extremely high literacy rate, all Cuban residents know how to interpret meteorological reports, which are broadcast every six hours, and more frequently as hurricanes or other natural disasters approach.

“A taxi driver can tell you what a hurricane 5 is on the Saffir-Simpson scale and they will give you a whole lecture on what they need to do to prepare,” said Gail Reed, executive editor of the Medic Review, a peer-review journal about health and medicine in Latin America.

The nationalized TV and radio networks broadcast the national plans for evacuation, which is mandatory, resulting in fewer deaths unlike in the U.S. and elsewhere where residents are less informed of the dangers and often lack the economic resources to evacuate voluntarily.

Not only is the entire country mobilized, but the country’s people prepare for disasters, not only just before they happen but on an ongoing basis. Overgrown trees near phone and electrical lines are cleared so there is less risk of fires and electrocution from downed power lines. Cooking gas lines are shut down to prevent gas explosions from high wind. Crops are harvested to the extent possible in advance of an oncoming hurricane.

Cuba also emphasizes the protection of personal property, such as furniture and appliances, moving peoples’ belongings to higher ground long before disaster strikes. The Cuban government also replaces belongings that get damaged, at government expense. Cuba makes its most vulnerable populations a priority temporarily relocating women, children and the elderly.

As an island, Cuba is especially vulnerable to rising sea levels. Cuba has begun implementing Project Life, a plan to prepare the country for climate change over the next century. This includes plans to boost coastline protection, implement engineering to buffer waves, and relocating low-lying villages. “Impressive,” is how David Guggenheim, a marine scientist and president of Ocean Doctor, a nonprofit in Washington, D.C., describes this plan. He adds, “Cuba is an unusual country in that they actually respect their scientists, and their climate-change policy is science driven.”

How does Cuba do it?

Armando Choy, a leader of the Cuban Revolution, said, “This is possible because our system is socialist in character and commitment, and because the revolution’s top leadership acts in the interests of the majority of humanity inhabiting planet Earth – not on behalf of narrow individual interests, or even simply Cuba’s national interests.”