Wilbur Ross, the billionaires’ cabinet and false promise of prosperity 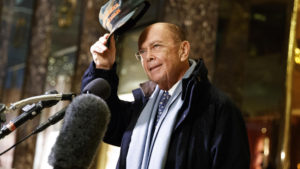 In the weeks after Donald Trump won the presidency of the most powerful country in the world, commentators worldwide have watched the president-elect’s every move with careful eyes. His cabinet picks in particular are gaining attention as Trump plots his course for once he assumes office. Despite all the theories about what his course will be, his cabinet choices leave one thing abundantly clear: Trump, although standing outside of the traditional political establishment, is still very much part of the ruling class. The government he is assembling is a government of, by and for the super-rich, just a Clinton cabinet would have been.

Wilbur Ross’ appointment as Secretary of Commerce is prime evidence of Trump’s allegiance to the ruling class. The billionaire has a long history in the financial sector, where his colleagues on Wall Street dubbed him the “king of bankruptcy” for his habit of buying struggling businesses, “streamlining” their operations by slashing wages, laying off workers and jettisoning workers’ benefits. Mitt Romney attracted criticism during the 2012 elections for the same strategy he employed at Bain Capital.

While Ross’ appointment reveals that little has changed regarding the capitalist monopoly over politics, it is revealing in terms of the specific and unique character of the Trump administration. Ross has been noted for his atypical investments in the U.S. manufacturing sector and for his strident advocacy for the same trade policies as Trump. In this regard, Ross’ appointment indicates that Trump does plan on moving ahead, at least in part, with the protectionist economic policy he campaigned on.

It is vitally important that all people opposed to Trump, his movement, and the system over which he now presides, be clear about Trump and Ross’ economic policy. While protectionism may appear to be pro-worker, especially in the way that Trump framed it during his campaign, it is not the solution to the deep systemic issues burdening workers in the present economy. Low wages, job insecurity, short hours, low union membership and other well-known dangers facing most workers are the result of the capitalists’ drive to increase profits by overturning workers’ gains in recent decades.

In the 1970s, high union density and a high overall strength of organized labor in the industrial centers of the capitalist world—the United States and Western Europe—led to a high overall standard of living for workers. These were hard-won achievements of the labor movement, which had struggled since the dawn of the industrial age to raise wages, win a 40-hour work week, the weekend and other rights. During the 1970s, however, the world capitalist economy entered into a period of crisis wherein low profit rates created an overall drag on the capitalist economy, and the capitalist class targeted the gains of the workers’ struggle in an effort to widen profits. This is why in the 1970s and 80s industrial jobs moved overseas to East and Southeast Asia and to Latin America from the United States and Western Europe.

The current setup of the world economy and the resulting conditions for workers is, in other words, a consequence of profit being the fundamental driving force of the world economy. On the other hand, stagnant wages, job insecurity, shortage of full-time work, etc. are not consequences of the shift of manufacturing jobs overseas, per se, but rather the results of a successful attack by the ruling class on organized labor.

Ross’ appointment should therefore be not a source of hope, but rather of deep concern to working people. He represents not only the ruling class in general, but also a specific section of capitalists that has been most aggressively “leaning out” the businesses which operate out of the United States. He is in fact so deeply embedded in his multitudinous businesses that Politico is already highlighting the deep conflicts of interest that his appointment brings with it.

But those so-called conflicts of interest are in reality rather common; it is well-known that bankers often become heads of financial and economic policy. Take, for example, Larry Summers, Henry Paulson and Timothy Geithner, all of whom were prominent bankers who served as Secretaries of the Treasury during the Great Recession. Trump, however, has picked from the same ultra-wealthy class some of its most rightwing elements.