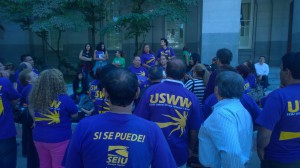 On August 25, workers from SEIU-USWW converged on the California state capitol to demand an end to wage theft. Assembly Bill 2416 states that a lien will be placed on the assets of a company owner who has a dispute filed against them for nonpayment of wages. Through advocacy of AB 2416, the workers hoped that employers would no longer be able to refuse to pay employees for hours that had already been worked.

Too often, workers complained that even after going through the proper channels, they were being denied payment for work already completed. Workers then have the ability to file a claim with the Labor Board who can decide whether the employer is liable for the back wages requested. In the instances in which the board rules against them, companies faced with having to rightfully give their workers their wages have been known to change their names and continue doing business as usual.

This impunity of the capitalist class is a built in mechanism allowing for the continuous exploitation of the working class. When considering the fact that wage labor itself rests on the foundations of unpaid labor and the extraction of surplus value, this practice is unsurprising. While all workers are exploited, immigrant workers are in a particularly vulnerable position. The service sector sees in this vulnerability the ability to more easily exploit a community who already distrusts law enforcement.

Purple shirts flooded the offices of various Senators. As they were in session, their aides listened to stories of wage theft from workers all around the state. One such story was that of a Los Angeles man who worked overtime for weeks without compensation. He filed a complaint and after six months he won and the owner was told to pay. However, by this time the company no longer existed and there was no way to collect. Similar stories were reported throughout the day by workers from San Diego, Los Angeles, and Sacramento.

All of the workers who spoke to Liberation News at the capital were well aware of the state of exploitation under which they are forced to work. One man commented that if he were found guilty of stealing, there would be little chance of him escaping the consequences. However, he said, for his boss, getting away with it was a common practice and little was being done about it.

Although this bill does not solve all of the problems that workers have to deal with, it is a crucial step in workers showing their collective power to gain influence within the production process. If it fails, it will be yet another example of how the interests of the system coincide with the interests of the  capitalist class and it is thus obsolete as a method of redress. If it succeeds, workers will have come another step closer to fully holding the ruling class responsible for its exploitative practices. They will also have gained a tangible victory from which they can see the power of workers when they become organized.