“The ultimate abandonment of your client is to get assassinated.”

Those were the words of Khamis al-Obeidi, a member of Saddam Hussein’s defense team. Former U.S. Attorney General Ramsey Clark cited al-Obeidi’s words at a June 27 press conference in Washington, D.C.—six days after the lawyer was kidnapped, tortured and assassinated by members of the Iraqi occupation police.

Al-Obeidi was the third attorney on Hussein’s defense team to be assassinated.


When historians eventually begin their post mortem analyses of the U.S. war and occupation in Iraq and the Bush regime’s blatant disregard of basic international standards of justice in the “war on terror,” there will undoubtedly be mention of the brutal prisons in Guantánamo and Abu Ghraib. Even if the war and its atrocities ended today, those two well-known monstrosities could be joined by a third to form what will be reviled by the world’s progressive people as an axis of injustice: Guantanamo, Abu Ghraib and the show trial of former Iraqi president Saddam Hussein.

Hussein was taken prisoner by occupying U.S. troops on Dec. 13, 2003, and has been held in a military prison by U.S. forces since then, supposedly in Iraq. Since that time, his capture, imprisonment and “trial” have been key elements in U.S. propaganda aimed at both the Arab and U.S. people.

Hussein is one of eight defendants in the trial. The trial is being administered by a hand-picked group of predominantly anonymous so-called jurists variously known as the Iraqi Special Tribunal, the Supreme Iraqi Criminal Tribunal or the Iraqi High Criminal Court. It operates under the auspices of the Pentagon’s Regime Crimes Liaison Office.

The defendants are charged with an alleged order to execute 148 people after a 1982 attempt to assassinate Hussein.

The tribunal makes no pretense of impartiality. Its sole purpose is to carry out the show trial of the former Iraqi government. It is not authorized, for example, to try U.S. soldiers or officials for war crimes committed against the Iraqi people.

Even pro-imperialist “human rights” groups like Human Rights Watch have what they call “serious concerns” about the tribunal’s legitimacy.

At the June 27 press conference, Hussein’s U.S. attorneys Ramsey Clark and Curtis Doebbler presented a Kafkaesque list of blatant insults to justice. Defense attorneys did not receive documents that the prosecution cited in their arguments. Defendants were interrogated without counsel for several months before they were allowed to speak to attorneys. The judge repeatedly refused defense efforts to present motions.

No transcript is being made of the trial proceedings.

The defense attorneys were informed of the charges against their client on May 15, nearly eight months after they were charged. The judge has tried to mask his extreme bias. However, Ramsey Clark revealed at the Washington, D.C. press conference that the defense team has a video of the same judge speaking at an earlier rally where he states that Saddam Hussein should be executed without a trial.

Leandro Despouy, the United Nations Special Rapporteur on the Independence of Lawyers and Judges, denounced the Iraqi Special Tribunal and questioned its legitimacy. “Its jurisdiction is limited since it cannot judge those responsible for war crimes committed by foreign armed services, neither during the first Gulf war (1990) nor after 1 May 2003,” he said. “Also, the Tribunal was set up in the context of an armed occupation which is mainly considered to be illegal.” (Univ. of Pittsburgh Jurist, June 26)

Despouy called for the Iraqi government to begin an independent investigation into the murder of Khamis al-Obeidi.

The procedural injustices on clear display in this show trial are dwarfed by the violence against the defendants and their legal team. “Without protection,” Clark noted, “a fair trial is, and in this case was, impossible.”

On Oct. 20, 2005, the first day of the trial, defense attorney Saadoun Sughaiyer al-Janabi was kidnapped by what the Associated Press and other big business news sources called “gunmen wearing police and military uniforms”—undoubtedly members of the Interior Ministry. The next morning al-Janabi was found dead.

For part of the trial, three defendants had no defense counsel. Their attorneys, understandably terrified, had refused to appear in court.

Clark described futile efforts to get protection for attorneys and others on the defense team. An emergency request to the court, dated Nov. 28, 2005, began with the observation that, “The first duty of the court is to protect its ability to perform its duties. This is not possible in the face of continuing threats, assaults and assassinations.”

The real reason for the trial

Saddam Hussein’s role in Iraq is long and complex, and needs to be seen in the context of the 1958 Iraqi revolution. Hussein represented a strongly anti-communist wing of the Baath Arab Socialist Party. This wing was engaged in a violent struggle against communists and other left forces, including some within the Baath Party itself. But at the same time, much like European social democratic parties, it combined this violent anti-communism with a program of social reforms that benefited sections of the masses as well as Iraq’s national development.

Baathism in Iraq represents the aspirations of a nationalist bourgeoisie that is trying to overcome the legacy of colonialism. As a consequence, the Baathist governments had a complex and contradictory relationship with imperialism. At times they collaborated, while at other times they confronted the imperialist powers.

In spite of its anti-communism, Baathism took root in the social soil created by the 1958 Iraqi revolution as a rival to the then-revolutionary Iraqi Communist Party. The 1958 revolution was a thoroughgoing bourgeois nationalist revolution aimed at developing the Iraqi society and breaking the bonds of British imperial domination.

Saddam Hussein collaborated opportunistically with the United States in launching the 1980 war with Iran. But the regime was never a comprador, puppet government of U.S. imperialism in the same way as the client regimes in Jordan, Kuwait or Saudi Arabia, for example.

When Hussein began to assert Iraqi national interests independent of U.S. imperialist interests—for instance, with the 1991 invasion of Kuwait—his regime was demonized and targeted for destruction.

The crimes for which Hussein and the other members of the Baath government are charged pale by comparison with the genocides and massacres committed by U.S. client regimes like Colombia, Israel or the Philippines. They especially pale compared to the crimes committed by consecutive U.S. governments against Native American, Puerto Rican and African American communities in the United States or against oppressed people around the world.

The real reason Hussein and members of his government are on trial and facing execution today is that they dared to stand up to U.S. imperialism. All the rest of the charges are window dressing to deceive public opinion.

Anti-war and anti-imperialist activists should expose the hypocrisy of U.S. occupation forces carrying out a trial for “crimes against humanity” while U.S. troops and their puppets commit daily rapes, massacres and assassinations against the Iraqi population.

The U.S. occupation regime has no right to try Saddam Hussein or any of his co-defendants. They should be released immediately.

Does U.S. pledge to cease ‘combat operations’ in Iraq really mean the end of occupation? 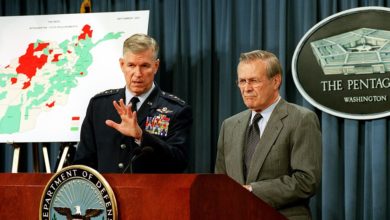 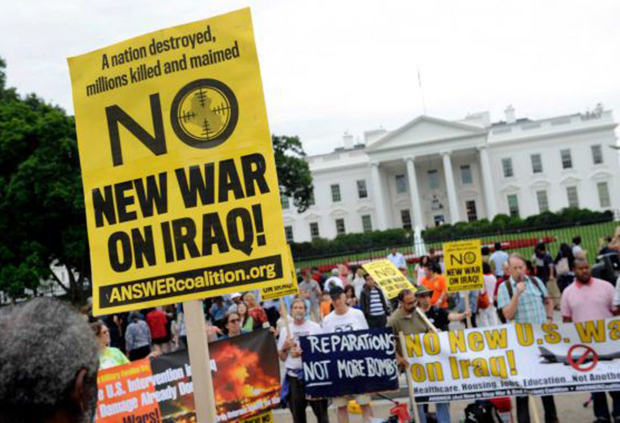 Why is the Biden administration bombing the people who beat back ISIS?