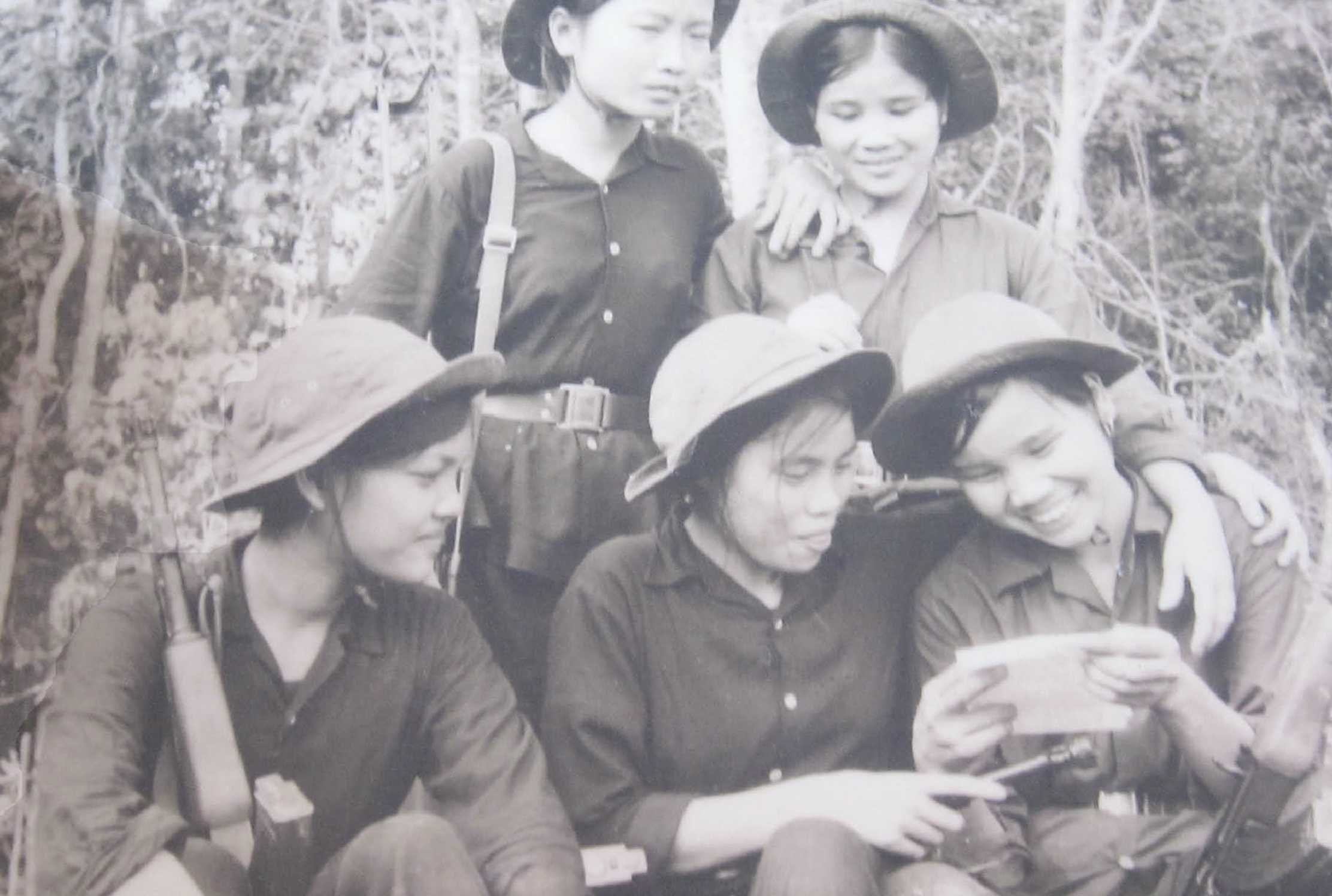 The following article is based on a talk given at a PSL Community Forum in Los Angeles.

By January, 1968 the United States was heavily involved in an escalating war on the people of Vietnam  as the Vietnamese people continued a nearly 30-year long national liberation struggle. That national liberation struggle against French colonialism began in the 1930s, and by the 1950s had morphed into an open class struggle led by the Workers’ Party of Vietnam under Ho Chi Minh’s leadership, causing the U.S. empire to frantically aid the occupying colonial French military forces.

Following its indirect attempt to undo the national liberation struggle and deliver the country back to feudal-colonial control, the United States became directly involved, eventually sending U.S. troops and  initiating its own campaign of genocidal measures such as indiscriminate napalm bombings and using the notorious chemical weapon, Agent Orange. The U.S. intervention was conducted in the name of “protecting the sovereignty” of the colonial puppet regime, the Republic of Vietnam, against “communist invasion.”

The Republic of Vietnam (sometimes referred to as “South Vietnam”) was headed by a former French collaborator and was hamstrung by an economy which struggled despite copious and consistent aid from Washington. More contradictory were the means by which the U.S. carried out its noble initiative against the “warmongering” communists. By the mid-1960s heavily-armed U.S.  troops replaced the French colonial garrison to once again occupy the country with its wish to return a fictional “peace and freedom” that never existed under French colonialism.

The liberation of the Vietnamese people was one out of the many struggles in the world at that time which saw the ties between the fight against colonialism and the struggle to abolish class oppression. These struggles directly threatened the power of the corporations and the imperial ruling class and its state. This state was and is a repressive warmongering apparatus, entirely divorced from the welfare of the masses of people while preaching its narrowed sermon of peace and democracy to peoples around the world it seeks to dominate.

When people around the world rise up to take back their power, imperialism is threatened.  People’s power is threatening because capitalism and its expansionist nature depend not only on the exploitation of the working class within its borders, but also the willingness of collaborators of oppressed nations to collude with
imperialism.

The Vietnamese national liberation struggle took place in this context.

Just before the Tet Offensive, the United States claimed to control territory accounting for 67 percent of the South Vietnamese population, though internal documents from the Pentagon revealed these statistics had no relationship to reality. What were described as secure zones to the U.S. were often identified by the Vietnamese National Liberation Front  explicitly as liberated zones as Vietnamese support for the NLF reached deep into southern Vietnam. U.S.  forces, in reality, formed enclaves in a sea of anti-imperialist hostility and instability, able only to to exert temporary physical control over large regions . They  failed to substitute Republic of Vietnam political infrastructure for NLF’s and ultimately never succeeded in establishing a real political foothold.

The presence of the empire ironically built up the power of the people under the force of the National Liberation Front despite extreme repression. U.S. efforts to build a stable puppet regime in Vietnam were therefore illusory at best and delusional at worst.

Ignorance and imperial hubris led the leadership of the U.S. occupation to dub the Tet Offensive a “surprise” attack by the Viet Cong; it was in reality a strategic offensive in both urban regions and rural areas. More than simply a surprise attack or spontaneous uprising of the communists and guerrillas, the Tet Offensive involved coordinated attacks carried out in more than 100 different cities and towns in Central and South Vietnam.

Within a short period, the National Liberation Front initiated devastating attacks across Central and Southern Vietnam and even on the U.S. embassy and the old imperial city of Hue. Targeting the U.S. puppet’s force’s nerve-center war institutions, the Tet Offensive shook America out of the optimism falsely presented by the Pentagon’s propaganda machine and decisively shifted public opinion to oppose to the U.S. intervention in Vietnam.

While the Tet Offensive did not end the war, nor was it waged with that specific intention, the organizational power of the National Liberation Front and the People’s Army and their ability to wage an attack on such scale against the most powerful military forces in the world was, without a doubt, a decisive turning point in the war. Along with exposing the morally bankrupt character of the imperialist state and the Lyndon Johnson Administration, the Tet Offensive set into motion forces that eventually coerced the empire into de-escalating and agreeing to hold peace talks with the Workers’ Party.

These victories were won at a time when the Vietnamese People’s Army was only about 20 years of age while the National Liberation Front had had only approximately 8 years to develop. Despite these organizations’ youth, the liberation forces maintained an organizational power that crippled imperialism’s will for aggression and which won the initiative for Vietnamese national liberation. With minimal aid and a near-complete lack of advanced weaponry, the NLF relied on the spirit of self-reliance and the determination of a truly popular united army under the leadership of the Workers’ Party of Vietnam—a party which directly served the interests of its people and ceaselessly built upon the principled application of Marxism and Leninism to the concrete conditions of the war of liberation in the small colonized country of Vietnam.

The role of the Workers’ Party’s leadership cannot be understated when evaluating Vietnam’s victory over U.S. imperialism. Without an emphasis on mobilizing the whole of the Vietnamese people in the struggle for independence, without a correct appraisal of the struggle as one for national liberation against imperialism and without a dedicated cadre of organizers united by a Leninist party, it is doubtful that the Vietnamese national liberation struggle could have been waged so successfully.

Ho Chi Minh said this regarding the path that had led him to Leninism: “I came upon the fact that only socialism and communism can liberate the oppressed nations and the working people throughout the world from slavery. There is a legend, in our country as well as in China, on the miraculous ‘Book of the Wise.’ When facing great difficulties, one opens it and finds a way out. Leninism is not only a miraculous ‘book of the wise,’ a compass for us Vietnamese revolutionaries and people: it is also the radiant sun illuminating our path to final victory, to socialism and communism.”

Setting the record straight for such a victory is critical for revolutionaries: as Ghassan Kanafani—a leading member of the Popular Front for the Liberation of Palestine—said regarding the importance of studying history for Marxist-Leninists, “The goal of education is to correct the march of history. For this reason we need to study history and to apprehend its dialectics in order to build a new historical era, in which the oppressed will live, after their liberation by revolutionary violence, from the contradiction that captivated them.”

People who benefitted from the exploitation of their people under the U.S. puppet regime—rich landowners and capitalists who colluded with the wealthy colonizers—have endlessly fabricated anew the history of the revolutionary struggle of the workers and peasants against imperialist pillaging and plundering. Despite the reactionary obscuring of history to fit the narrative of the oppressor, a correct assessment the war is possible under the framework “what the war is being waged for and what classes staged and directed it.”

In the light of Marxism-Leninism applied to the democratic revolution in a colonial country, the party used theory to make critical analyses of the contradictions of that society, and stated clearly the fundamental tasks of the revolution. In light of the struggle for the liberation of the peasants and workers from imperial plundering, the vanguard party of devoted revolutionaries in Vietnam successfully carried out the unification of democracy and centralism to provide a strong and correct leadership in its political strategy and tactics.

Such lessons are relevant today, as the struggle for national liberation is just as critical as it was in January, 1968. A fighting commitment, and firm belief in victory was a critical component to Vietnam’s victory. This is exemplified by another quote from Ghassan Kanafani: “Everything in this world can be robbed and stolen, except one thing; this one thing is the love that emanates from a human being towards a solid commitment to a conviction or cause.”