April 19 marks 60 years after U.S. imperialism experienced its first major defeat, when its mercenary invasion force was crushed by Cuba at the Bay of Pigs. Known in Cuba as the victory at Playa Girón, Cuba proved to the world that this small nation could defeat the most powerful imperial country, by the determination of a people now in revolutionary power.

The truth about what happened at Playa Girón

The U.S. invasion planners attempted to create a fiction that the invasion was an attempt by exiled Cubans to free their country. This flies in the face of historical facts. Although the United States — in a plan initiated by Eisenhower and continued by Kennedy — tried to hide its role, the so-called Brigade 2506 was entirely conceived, trained, and armed by the U.S. government, which provided the landing boats as well. For months, the CIA trained the counterrevolutionaries in Guatemala.

The ground invasion was preceded (and followed) by numerous acts of terrorism carried out by the CIA. In central Havana, “El Encanto,” a large department store, was set ablaze by a CIA-recruited counterrevolutionary. A young worker, Fe Del Valle, died in the fire.

The very next day, thousands of Cubans took part in the funeral cortege to mourn the lives lost in the bombings and to defend their homeland. It was then and there, outside the cemetery, that revolutionary leader Fidel Castro proclaimed the socialist character of the Cuban Revolution:

“This is what they cannot forgive: the fact that we are here right under their very noses. And that we have carried out a socialist revolution right under the nose of the United States!

It was not known by the Cuban leaders exactly where the invasion would take place, but the whole island, its military, militias and people, was prepared, ready to defend the homeland.

Mercenaries got no support from Cuban people

The U.S. attempt to restore U.S. neocolonialism took place place in the morning of April 17 when 1,500 mercenaries left from Guatemala and Nicaragua and tried to invade Cuba at Playa Girón. The attack won virtually no support from the Cuban people — the workers and peasants — who mobilized to defend  their homeland and defeated the U.S.-backed invaders.

It was the disciplined clarity and honesty of the Cuban leadership that inspired the people to take up arms and protect their revolution. Fidel Castro was at the battleground, directing the mobilizations. When he arrived in the small town of Jaguey Grande to head to the field of operations at Playa Girón, the people shouted, “Oh, this will be over soon, Fidel arrived!”

At one point Fidel announced, “The glorious soldiers of the Rebel Army and the Revolutionary National Militias have already engaged the enemy in combat at all landing points.

“They are fighting in defense of our homeland against an attack by mercenaries organized by the imperialist government of the United States.

“Our troops are already advancing against the enemy, confident of victory.

“The people are already being mobilized, carrying out our watchwords of defending the homeland and maintaining production.”

By April 20, the Revolutionary Armed Forces had completely defeated the counterrevolutionary mercenaries. Eleven days later, during Cuba’s May Day International Workers Day celebration, Fidel Castro recounted the events, attributing the victory to the iron discipline of Cuban revolutionaries and the mobilization of workers and peasants. This represented a monumental victory not only for Cuba, but all working class and oppressed people.

The Revolution’s triumph at Playa Girón was by no means the final victory for Cuban self-determination. Cubans have resisted and overcome numerous challenges since the Bay of Pigs invasion: the Cuban Missile Crisis; the collapse of the Soviet Union and socialist camp. The people and are still suffering under a genocidal blockade that has cost tens of billions of dollars to the economy. The U.S. military still occupies 72 square miles of Guantánamo’s territory.

Workers everywhere, and especially in the U.S., should draw lessons from the Cuban Revolution and the victory at Playa Girón as we participate in the fight to end the blockade.

It is important to recognize the gains made by Cuba’s socialist revolution in the past 60 years. The famous Cuban Literacy Campaign raised Cuba’s literacy rate to nearly 100 percent by December, 1961. This program has been replicated in Bolivia, Venezuela, Nicaragua, and elsewhere since, thanks to Cuban teachers. For comparison, the current U.S. literacy rate hangs around 86 percent.

The revolution put an end to segregation and legal discrimination on the basis of race, gender, and now sexual orientation as well. Cuba provided vital military assistance to the anti-apartheid and Pan-African movements, as well as to revolutionary movements in Latin America and elsewhere.

Health care, education, food, and housing (through sweeping land reform) were made constitutional rights. Since 1959 Cuban doctors have provided healthcare to upwards of 1.8 billion people in other countries, including throughout the COVID-19 pandemic. Cuba’s internationalist healthcare model is unparalleled by any other country in the world.

These are just some of the gains made by the revolution in the face of an imperialist blockade. Under the leadership of the Communist Party of Cuba, the people have done and will continue to do whatever it takes to remain on an independent, socialist path.

The 8th Congress of the Cuban Communist Party will convene from April 16 until April 19. The primary focus points will be the following: core social and economic issues, defeating the COVID-19 pandemic, how to continue resisting the blockade, how the Party will continue relate to and engage with the Cuban masses, ideological activity and cadre-building efforts. This subject matter is very much in line with the values of the Cuban Revolution and its many millions of supporters who have defended it over the past six decades.

It is up to the people of the Americas and the workers of the world to stand with Cubans in defense of their right to socialism and self-determination. Cuban workers and peasants decided more than 60 years ago they would no longer be servants for U.S. imperialism or capitalism. They have been collectively punished for it ever since, and the whole world misses out on Cuban aid and intellect because of it.

Especially during a pandemic, it is crucial that all the people of the world have equal and open access to lifesaving care and technology. This requires the lifting of all imperialist sanctions and blockades, starting with the one that was imposed by the U.S. upon the Cuban people after they stood up to the empire six decades ago. 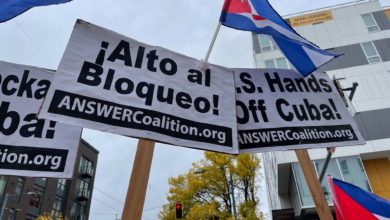