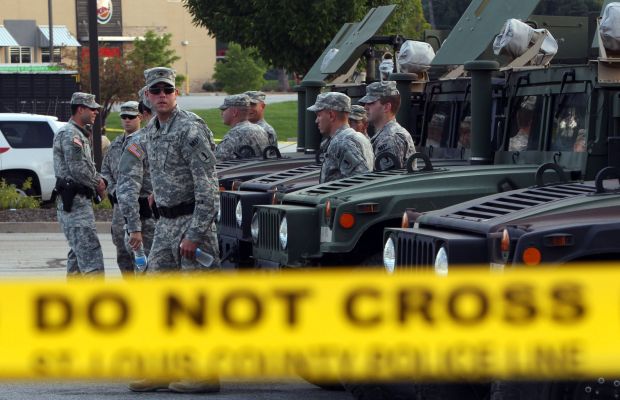 Around 700 veterans, including more than 75 currently serving or serving in the military this year, have put their names on an open letter to the Missouri National Guard soldiers deployed to Ferguson.

Dozens of signatures are being added regularly from men and women in the active-duty military, with messages of support for the protesters.

Active-duty service members, who could face all sorts of unfair repercussions or intimidation from their command, are making a conscious political stand against the status quo by publicly signing. It is an important new component of the nationwide upsurge of support for the movement in Ferguson, and against racism and police brutality in general.

Written by March Forward!, an anti-war and anti-racist organization of veterans and active-duty service members, the signatories include over 120 Iraq war veterans, nearly 300 recently-discharged veterans, and hundreds of others who served in Afghanistan, Vietnam, Korea, World War II, the Gulf war and more.

Some signers to the open letter are veterans living near Ferguson who have been attending the protests, and will be distributing the call to action directly to the National Guard soldiers there.

The open letter makes the case that the police tactics in Ferguson have been a brazen violation of the people’s constitutional rights, from a legal perspective. But it also says that this is a case where moral obligation should supersede even legal orders.

It asserts that a nationwide epidemic of racist police killings is very real. There is complete impunity for the police, even in the most blatant and heinous cases. Federal and local governments are doing absolutely nothing meaningful to stop it. The entire system goes out of its way to protect the killer cop, no matter what. The movement sparked by Ferguson is a just movement, and a movement is the only force that can defeat institutional racism.

And the signers show that when just movements arise—like this new movement against racism—U.S. troops can be on the right side.

The soldiers who the politicians and police would like to use to physically stand in the way of those marching against inequality, could instead end up being the ones holding the banners and the bullhorns.