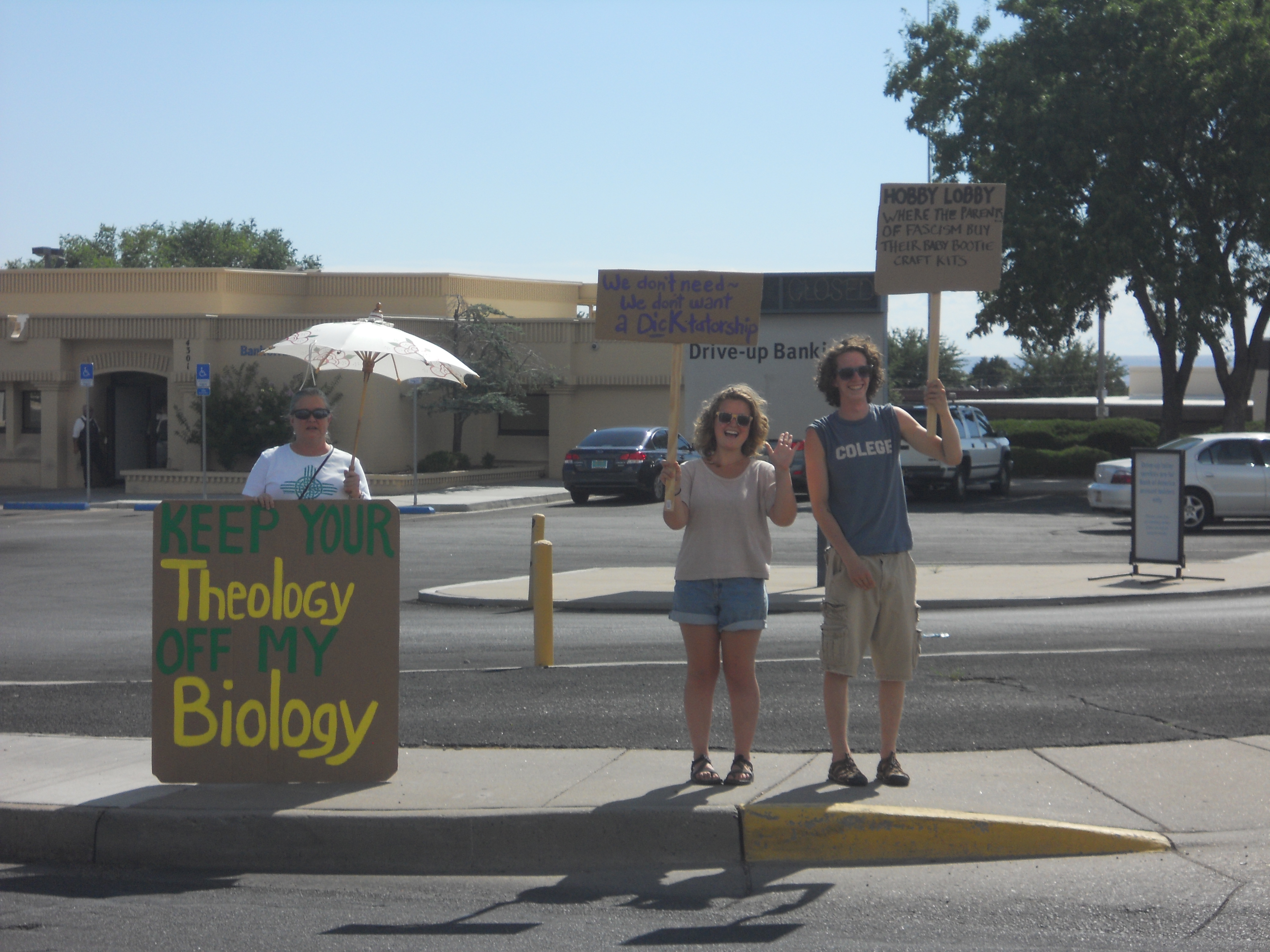 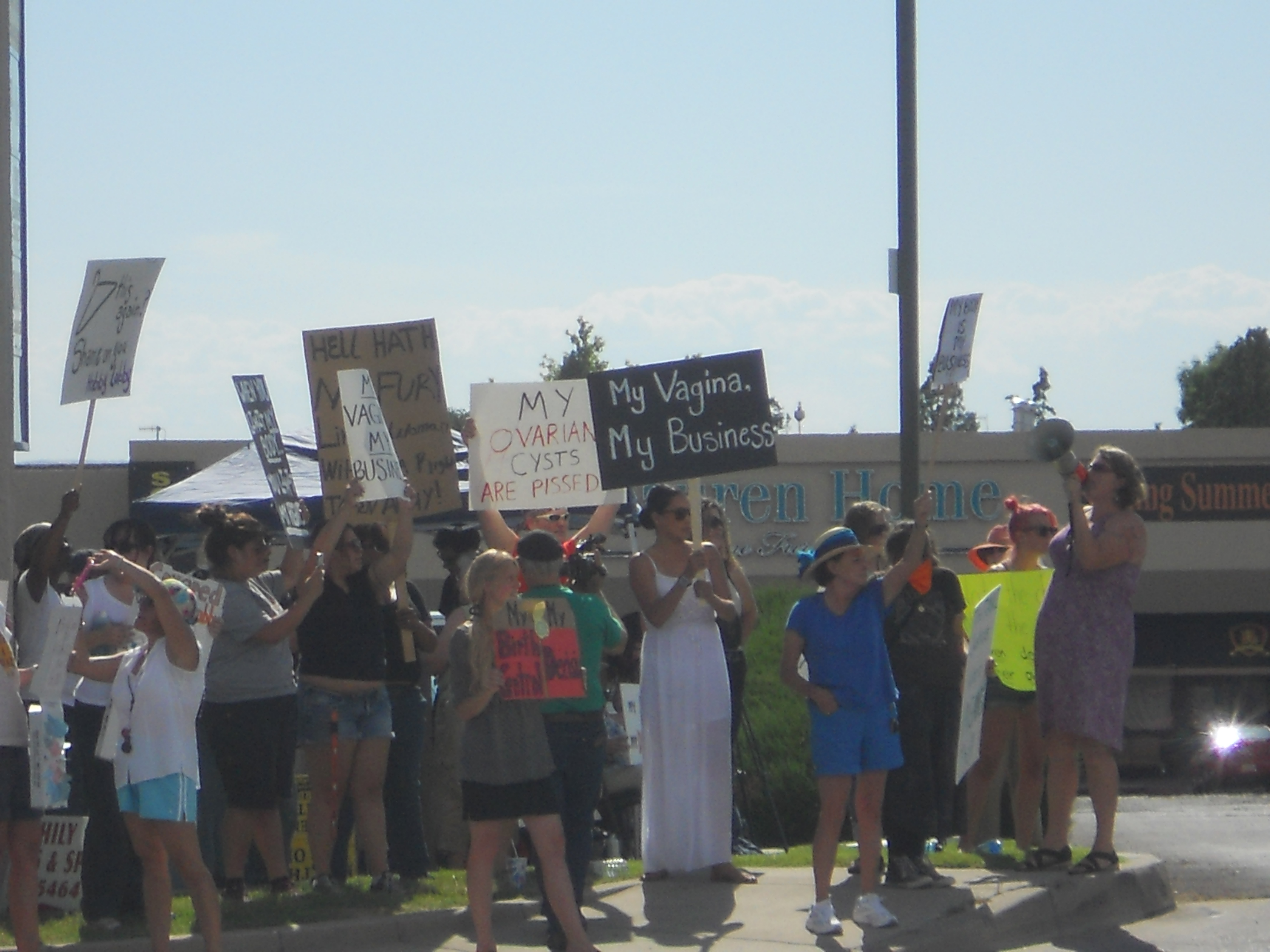 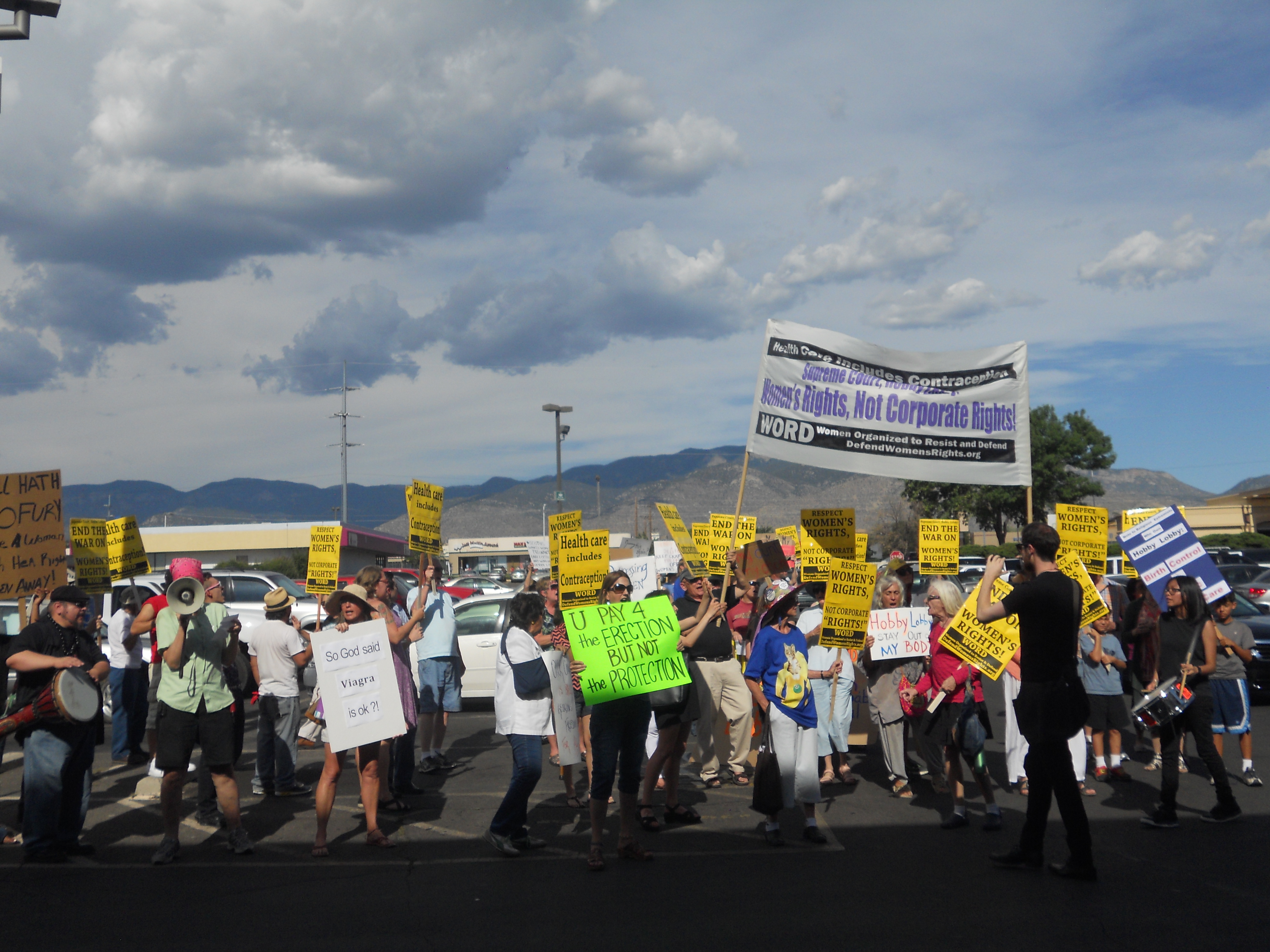 A courageous group of over 100 Albuquerque residents lined the busy street in front of a Hobby Lobby on July  7.  The group was formed not only of women and families throughout the city, but with the help of WORD, NOW and Personhood for Women among others. The signs were mostly hand made, very witty and representative of frustration at Hobby Lobby, the Supreme Court, capitalism, the disproportionate rewarding of some religions over others and the residual effects that this ruling will have on other marginalized groups. At one point, the spirited crowd marched right down to the doors of the store, letting them know that “ WE’LL BE BACK!”

It is no surprise that so many women and allies showed up remind Hobby Lobby that their decision reaches far beyond their tight-knit religious family. This attack on women’s reproductive rights comes just 8 months after Albuquerque stood up and said a fierce and resounding NO to the anti-choice ballot brought into the city by the notorious group Operation Rescue. For those that do not know, the proposed ordinance intended to stop abortions at or after 20 weeks. However, women and families from all over the city poured in to vote, and stop the ban from happening.

In the community of Albuquerque, the painful news of this Supreme Court ruling reached into the hearts and minds of citizens all over the city, for many reasons, including the upholding of one religion over all others.

As many may know, the Supreme Court chose to ban the use of peyote, even in religious ceremonies in 1990. It was only after three years of struggle that the Religious Freedom Restoration Act was passed, allowing Native Americans the right to use peyote in their religious ceremonies once again. Adriana Villar, a Native woman and queer activist, pointed out the hypocrisy: “I think it is important that the Supreme Court remembers that everybody has the right to freedom of religion, and in this case I think they made a gross misinterpretation to favor one religion over others.” She added on the practicality of using birth control methods in general: “Birth control is as old as any civilization that knew it was a normal part of community health.”

How women’s health is viewed in the United States historically is a root of the issue here. Women at the demonstration were not in any way ignorant of this. Mary Lou Singleton, shared her experience as a midwife in Albuquerque: “The control of women’s bodies is absolutely necessary for the patriarchy to function, and the patriarchy is the ruling system that we have right now. So midwives have always helped women control their fertility. Midwives hear women’s stories and I hardly ever meet a woman who hasn’t had an abortion. I think when we talk about one in three those are just the women willing to admit it in surveys, I think it is much higher than that. We know that this is a really common part of our lives, and we have to get it out of the shadows and protect our rights for this. Otherwise we’re just incubators. ”

Close to the large crowd, but keeping a safe distance, was a small group of about 15 people, holding an American flag, with the words “God Bless Hobby Lobby” embroidered across the front. These were the counter protesters who came to support the Supreme Court decision. When asked what made them so passionate about coming out to counter protest, the response from Mickah Witt, a young woman in the group was this: “I want people to understand that we have freedom of religion, and that they [Hobby Lobby] do have rights as a corporation.”

Perhaps an appropriate response could be found in a quote from  Susan B. Anthony, a women’s rights activist in the 19th century: “The fact is, women are in chains, and their servitude is all the more debasing because they do not realize it.”