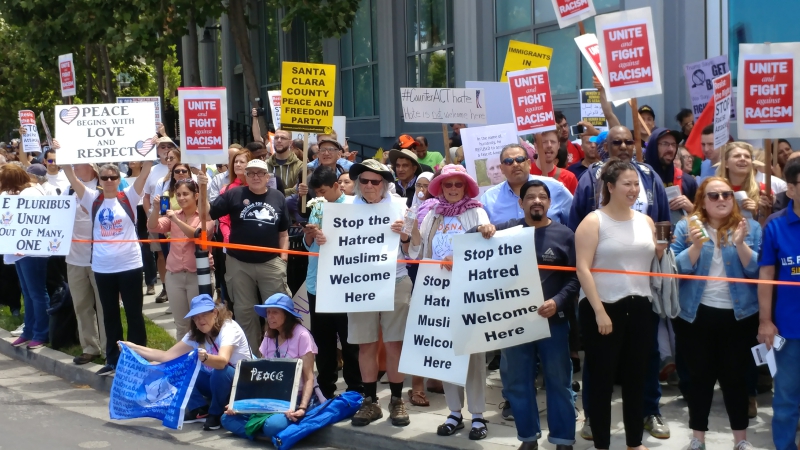 ACT for America, a national anti-Muslim hate group, had called for a “March Against Sharia” in Santa Clara, Calif., for June 10, along with 27 similar actions in other U.S. cities. It was a bust for the bigots.

There was no “march against Sharia” by the couple dozen right-wingers who showed up on the corner of Stevens Creek and Winchester. This is a busy intersection dividing San José and Santa Clara that has become known as the “Peace Crossroads” because of the many previous anti-war demonstrations held there. Huddled on one corner of the intersection, the bigots did not even attempt to hold a rally or chant, as hundreds of counter-protesters demonstrated on opposite corners of the intersection and along Stevens Creek stretching toward Interstate 880 and downtown San José.

Contingents from Party for Socialism and Liberation and Refuse Fascism also came, leading militant chants that were taken up by many participants. Popular chants included “From Palestine to Mexico, Border Walls Have Got to Go,” and “When Muslims (or Immigrants) Are Under Attack, What Do We Do, Stand Up Fight Back.” 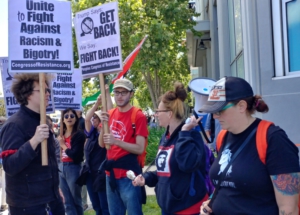 PSL activists carried signs promoting the “People’s Congress of Resistance,” to be held at Howard University Sept. 16-17, in Washington, D.C.

Activists from the Green Party had been calling for monthly antiwar protests at Peace Crossroads, including this Saturday, in solidarity with David Ledesma, who has been holding a weekly Saturday and Sunday peace vigil for the past 14 years in honor of his brother who was killed in the Vietnam War. They as well as Ledesma refused to leave the corner and instead stayed to dilute the hate messages the right-wingers attempted to convey through signs and flags, including one with Nazi-like symbols. Slogans on the ACT signs included “Proud to be an infidel, no to Sharia law,” “Sharia Law, Never Here in America,” and “Sharia: 30,000 attacks.”

Sharia law not the problem 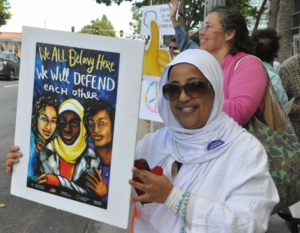 An immigrant from Ethopia, Saida, heard about the protest from CAIR and Jewish Voice for Peace. She pointed out that Sharia law is not the problem. “Last month 60,000 Americans overdosed themselves. Look how many homeless we have in the city. This is what I could do to make a change for all of us.”

Those responding to the ACT call were mostly middle-age, white, male and older while the counter-demonstration was diverse in age, gender and color, with youth highly visible and vocal.

There were no arrests or serious acts of violence as a result of the paltry turnout on the part of the anti-Muslim right-wing and much larger turnout of those who insisted on voicing their militant opposition to hatred and bigotry.