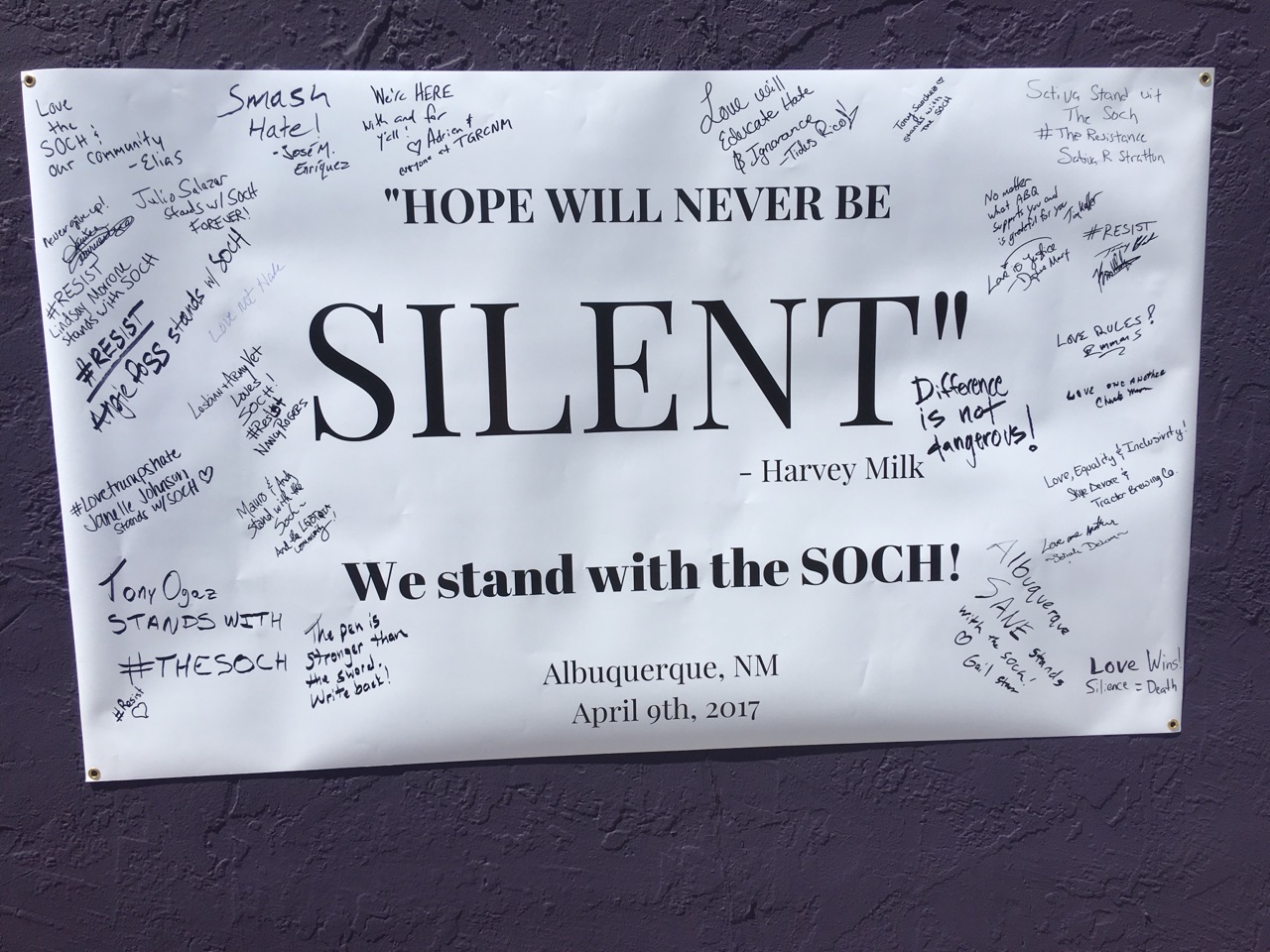 “Hope will never be silent” read the banner on the wall outside of the Albuquerque Social Club, a local gay club located in Albuquerque’s Nob Hill neighborhood. Community members rallied there last Sunday after the club was attacked by vandals.

On April 3, the well-known Club was vandalized with anti-LGBTQ slurs. Workers also received phone calls from an anonymous caller threatening to rape and kill the club’s employees.

In response the Albuquerque Social Club organized a demonstration to denounce the bigoted aggression, taking to the streets with banner and microphone, determined to be heard and seen. Community members joined together to stand up to the homophobic threats.

The speakers at the rally let their hearts do the talking. The opening words were: “Everyone is entitled to basic dignity and human rights. We recognize this as our struggle. We are going to fight this everyday together. Our proud community has endured so much.”

Anti-LGBTQ violence and oppression are constant features of capitalist society. The attack against the Albuquerque Social Club is part of a longer history of repression.

What is new at the moment is that the Trump presidential campaign and presidency have given energy to vile racist and bigoted forces everywhere in society. Trump opportunistically brought them in from the fringe, mainstreaming fascist ideology.

Albuquerque has a strong and militant LGBTQ movement. Pride is one the largest, if not the largest, outdoor event annually. Albuquerque ranks among only a handful of cities in continental North America that organizes a Trans March as part of Pride Week.

That’s why when the attack on the Albuquerque Social Club happened, the bar’s workers and patrons didn’t take what would have been an understandably defensive posture by staying quiet, but boldly defied the vandals by coming out with a show of strength.

One speaker at the rally declared, “It is our duty to fight for our freedom, we have nothing to lose but our chains.” These weren’t the words of a communist cadre, but of the Nob Hill Neighborhood Association president.

The crowd composed of students, activists, business owners, grocery store clerks and local politicians gathered to make one point loud and clear: that for every anonymous caller or vandal seeking to dim our light, there are dozens willing to show up, to speak out, to hold space and to inspire us to fight back.