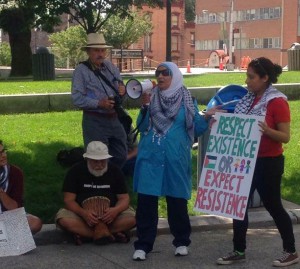 On Aug. 9, as Israeli resumed the ruthless bombing of Gaza after a tenuous 72-hour ceasefire ended, over 60 people from across New York and Massachusetts rallied at the State Capitol in Albany. The rally, organized by the Queer Palestinian Empowerment Network, ANSWER Syracuse (Act Now to Stop War and End Racism), and The Hampton Institute drew a multinational group of people from Boston and Western Massachusetts, Utica, Syracuse, and New York City.

Protesters rallied in West Capitol Park, attracting curious and sympathetic passersby, and broke out into marches several times throughout the day. At one point the in the day, protesters passed the megaphone around so that those who wanted to could share why they attended. One father, Declan McGeoghegan, accompanied by his wife and two children, spoke about the connections between different colonial projects across the world.

McGeoghegan, currently living in Syracuse, grew up in Derry, Ireland. After speaking to the crowd, he told a Liberation News reporter more about his story: “Growing up we were under occupation and classified as terrorists, but we were just innocent civilians going through our day. The same thing is happening in Palestine.”

McGeoghegan testified to the resilience of both the Irish and Palestinians, noting “Nothing is gonna beat the power of resistance.”