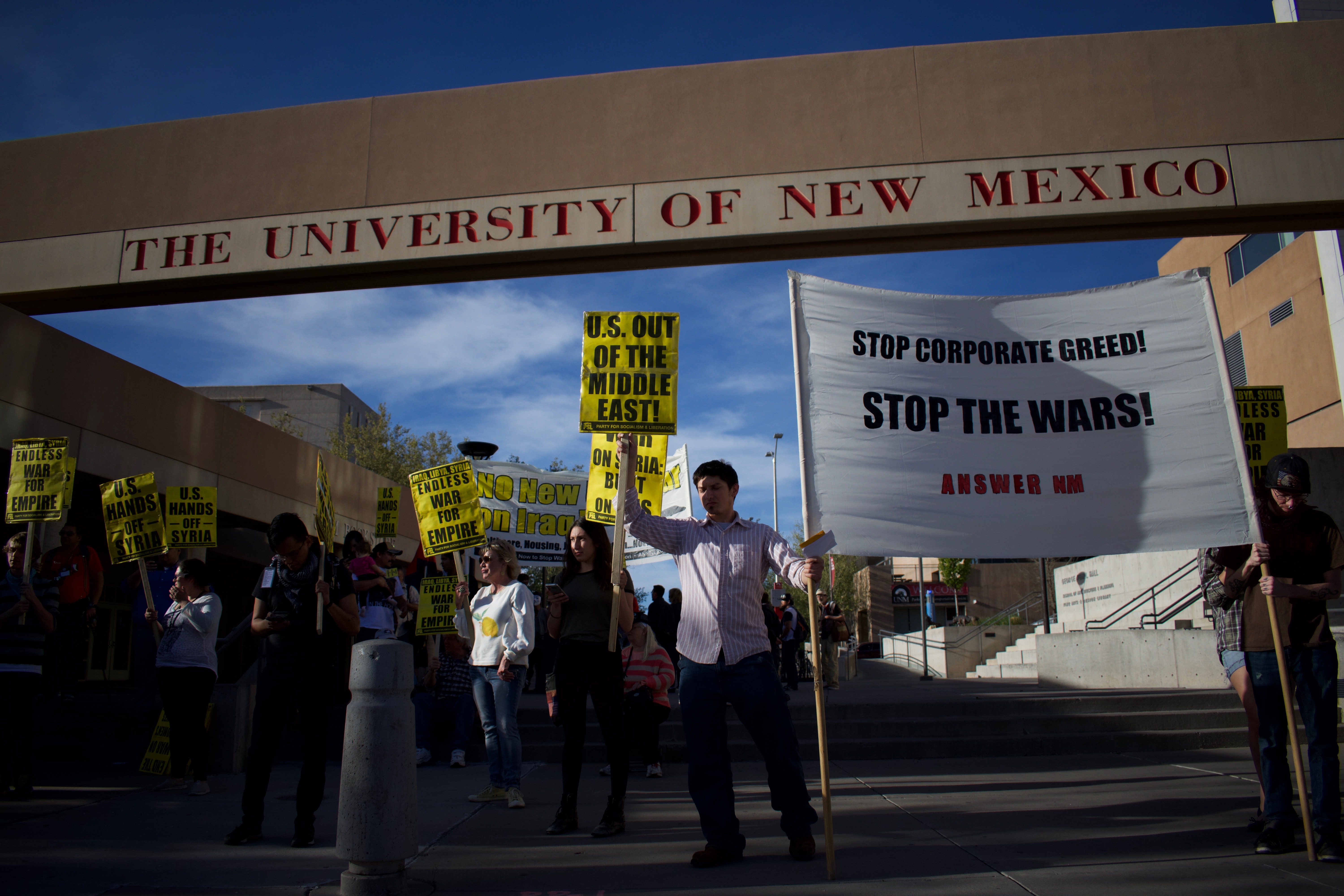 When the U.S. government attacked Syria with over 50 missiles on the evening of April 6. The ANSWER Coalition (ACT Now to Stop War and End Racism) put out a call to protest U.S intervention in Syria and Albuquerque’s Party for Socialism and Liberation answered.

Demonstrators gathered in front of the University of New Mexico bookstore April 7 with signs and banners that read, “US Hands Off Syria,” “War on Syria Built on Lies” and “Stop corporate greed! Stop the wars.”

The voices of people were heard in Albuquerque,  with the main message dazzlingly clear: to stand in solidarity with Syria, against U.S imperialism driven by profit.

Organizers lead chants followed by spirited crowd responses, such as, “What do we want? Hands off Syria! When do we want it? Now! And if we don’t get it? Shut it down!”

Another popular chant was, “One two three four, we don’t want your racist wars! 5 6 7 8, stop the killing stop the hate.”

People of all ages stood up to say that as working class people, they will stand against war and U.S. military actions against Syria, a sovereign nation with a right to self-determination.

Joel Gallegos took to the microphone to impart the message: “We can’t keep listening when they try to demonize another country and another sovereign nation. Every time they want to invade a nation, they find every excuse in the book. And the number one tactic is demonize the  leadership…

“We have Donald Trump of the billionaire class and the empire of the United States saying the same exact things that we are hearing in the media. How can we keep repeating those narratives? It needs to stop. And we need to start listening to people who are on the ground!”

Chris Banks, a protest organizer spoke. “They’re lying about chemical weapons. We know what the United States does when it bombs countries. It destroys societies and shreds countries to pieces and we are not going to stand for it!”

Throughout the evening, passersby on Central Avenue honked their horns in solidarity as community members held signs, chanted, and spoke out against U.S. overseas intervention that has consistently lead to destruction.

Community member Allen, a U.S. veteran, who participated in the civil rights movement in Mississippi in the 1970s, spoke as well.

Paige Murphy then took hold of the microphone, “This shows why we have to be here today to so say no! No wars! No new war on Syria. We see the lies and we’ve seen them before. It’s the same pattern every single time. We need a new system! A system that’s anti-war. What they’re doing in Yemen—in Libya—they were there for profit, and the list goes on. This is not a humanitarian war! This is a war for money. This is a war for profit!

People from Alamogordo, a small military based town in Southern New Mexico also joined  in the emergency call to protest against Trump’s proposed war on Syria. Amber Weigt recalled, “I have been watching my generation drawn into so many military conflicts  and wars, while capitalists make billions from the deaths of innocent civilians in Iraq, Afghanistan and Libya, for oil, power, and prestige. I know that this way of life is not sustainable for the billions of people affected by American imperialist conquest for profit. I have never taken a literal stand before, but I have been anti-war for years. I think that having grown up in an Air Force family, and being surrounded by friends and school mates that joined during the Iraq invasion served to solidify my own position of anti-war and anti-American empire.”