On May 24, U.S. Republican presidential candidate Donald Trump brought his message of racism and bigotry to New Mexico’s largest city, Albuquerque. He was met with community resistance led by youth, Natives, Latinos, Chicanos, whites and progressives of all backgrounds.

Meanwhile, outside the rally, over a thousand people were in the streets chanting and marching peacefully, putting forward the entirely justifiable demand to “Shut it down!” It was a massive grassroots turnout. 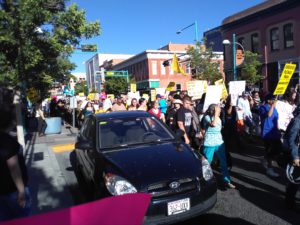 Demonstrators waved New Mexican and Mexican flags, as well as the Navajo Nation flag. Some circled around in vehicles playing corridos (traditional Mexican music). Other cars blasted LA rapper YG’s anthem “F*** Donald Trump,” where, in reference to communities coming together, you could hear lyrics like these pour through car windows: “It wouldn’t be USA without Mexicans / And if it’s time to team up, sh*t, let’s begin // Black love, Brown pride in the sets again / white people feel the same as my next of kin.”

Protesters carried signs that read “Trump not Welcome on Native Land,” “Deport Racism” and “A Wall Won’t Divide Us.”

On the other side, Trump supporters showed their bigotry as they yelled “Go back to Mexico” and used racist slurs.

When Trump began his speech, in a display of militant resistance, protesters led by youth tried to storm the Convention Center building. Police in riot gear and on horseback managed to keep protestors from entering the event, but for the duration the main entrance and exit to the building remained in the hands of anti-Trump protestors. When the event was finished, Trump’s  supporters were evacuated through a skywalk into a different building and exited one block away.

The militancy of the youth and protesters in the streets is completely reasonable given Trump’s inherently violent program.

The corporate media has tried to sensationalize events that followed. A brief stand-off with the police as they retook the Convention Center front doors led to police firing off volleys of smoke grenades and pepper spray into the crowd, and some in the crowd responding by lobbing handfuls of gravel, plastic bottles and flaming Trump merchandise in the direction of the police.

Later, a street celebration took over downtown Albuquerque. Protesters paraded with signs, chants and music. Oppressed people who experience political powerlessness, complete deprivation and marginalization from the system in their day-to-day lives were celebrating making their voices heard.

The police cleared the street celebration away with yet more smoke and pepper spray.

The next day, the corporate media quickly dubbed the community’s resistance as a “riot.” Albuquerque Mayor Richard Berry estimated total property damage at $10,000 and said, “We’re not going to stand for it!”

While Berry and Police Chief Gordon Eden feigned moral outrage over $10,000 for a couple broken windows and turned over trashcans, this is the same duo that regularly shells out more taxpayer money per officer than almost any other city in the country for police acts of criminality and violence. No one has ever heard Berry say that “he won’t stand for” the well over $30 million that taxpayers have been forced to dole out in civil lawsuits since 2010 because of routine acts of police violence.

And this gets to the heart of how an anti-Trump protest could so quickly take on an anti-APD flavor.

Albuquerque is the biggest city in a state that routinely ranks worst in the U.S. for poverty. The police in Albuquerque, like police in cities everywhere, are used to control all of the social consequences of a devastated mental healthcare system, joblessness, poverty and unemployment. They offer no solutions. The only thing they can do is act punitively to keep the lid on social and economic frustration that is constantly simmering.

The police develop an “us versus them” mentality. When they commit violence they are routinely immunized from any prosecution.

So while the police are trying to identify the “thugs” responsible for an alleged $10,000 in damage during the anti-Trump protest, the people of Albuquerque are quite aware who the thugs are that have cost them over $30 million!