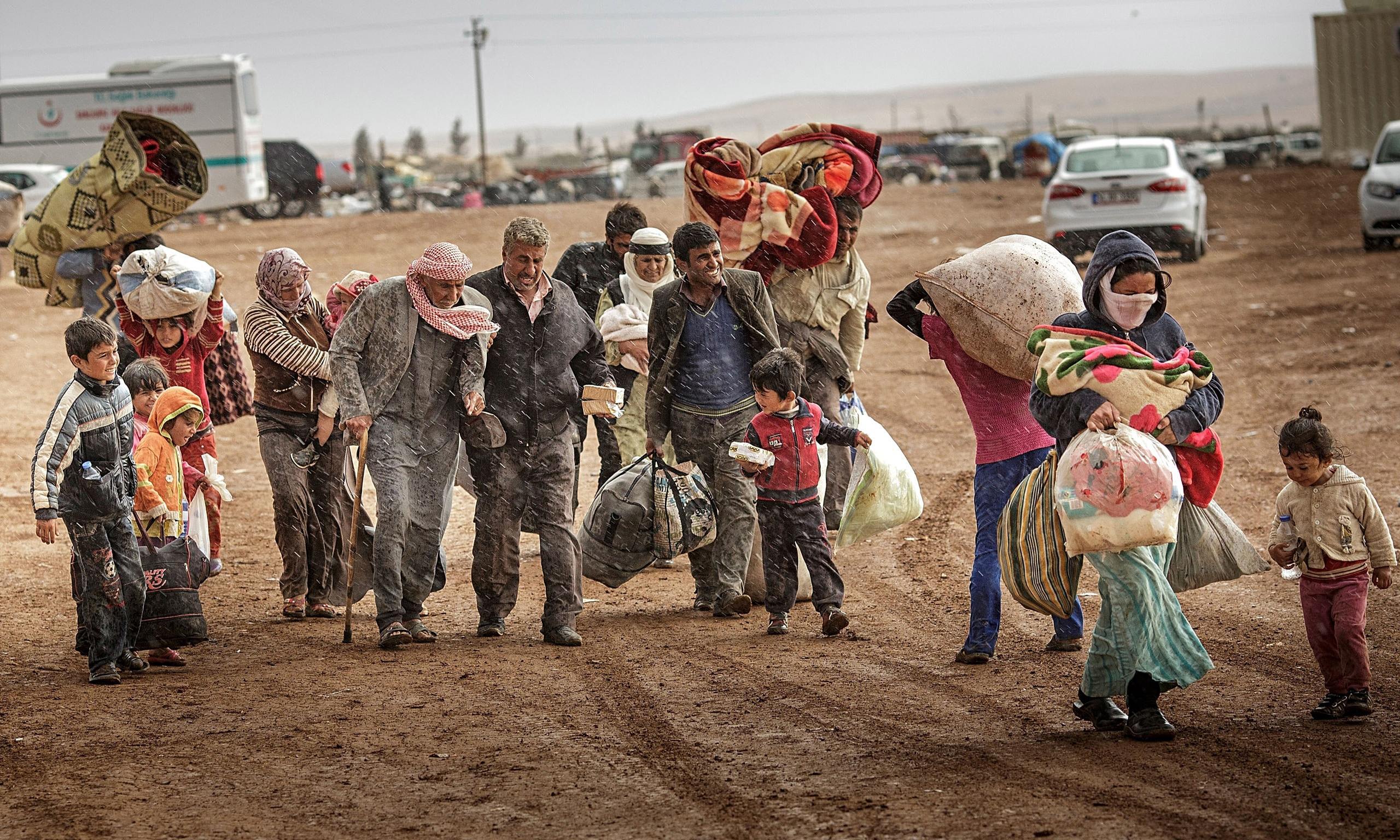 According to the UN Refugee Agency, almost half a million Syrians have returned back to their homes this year. This includes an estimated 440,000 internally displaced people and 31 ,000 from neighboring countries. Also according to UNHCR figures, since 2015 more than 260,000 refugees returned back to northern Syria, mainly from neighboring Turkey.

Based on U.N. reports, people are returning to Aleppo, Hama, Homs and Damascus. These are cities that have either always been under Syrian government control, such as Damascus, or others that have recently been liberated, such as Aleppo in December 2016, Hama in April, and Homs in May.

Speaking in a news briefing in Geneva on June 30, UNHCR spokeswoman Andrej Mahecic said, “This is a significant trend and a significant number.”

Let this sink in: Almost half a million people have recently returned back to Syria and all of them back to areas under Syrian government control. This “trend” that the UN is finally catching up with is indeed one that unequivocally shatters the “people versus regime killing its own people” myth that U.S. imperialism and its media organs have propagated since the start of the crisis in 2011 as part of their “regime change” operation in Syria. It is a simple reflection of the fact that the overwhelming majority of Syrian people support their government and, given the choice, would prefer to live in areas under Syrian government control.

US has nothing to do with ‘fighting terror’ in Syria

As the Syrian government aided by its allies is getting closer to defeating the so-called Islamic State, another myth that is melting away like snow under the sun is the one about the “U.S. war on terror in Syria.” The recent downing of a Syrian jet by the U.S. on June 18 as it was conducting a strike against IS forces in southern Raqqa once again exposes the fact that the U.S.-led coalition has nothing to with “fighting terror” in Syria. As the main force along with its regional reactionary allies that have funded, armed and provided the terror groups fighting the Syrian government, the U.S. is the source of terror itself.

Following the U.S. downing of the jet, the Syrian government released a statement that read: “The flagrant attack was an attempt to undermine the efforts of the army as the only effective force capable with its allies … in fighting terrorism across its territory. … This comes at a time when the Syrian army and its allies were making clear advances in fighting the [Islamic State] terrorist group.” This latest cowardly U.S. airstrike against the Syrian military as it fights IS follows earlier ones, two in Al-Tanf in June and May as well as one in Deir Ezzor in September 2016, which killed 80 Syrian soldiers.

The U.S. government does not want the Syrian government forces to liberate Deir Ezzor, one of the two remaining strongholds of IS, since that would essentially start the end of IS as well as any pretext for the illegitimate presence of the so-called U.S.-led coalition against terror in Syria.

Presently, SAA is engaged in a fierce fight in defense of the town of Deir Ezzor, which is under attack by thousands of heavily armed IS fighters. To the north of Deir Ezzor, the mainly Kurdish Syrian Democratic Forces aided by the U.S., besieged Raqqa, the other remaining IS stronghold, in a race to capture it before the Syrian government can concentrate its forces there.

While the approaching defeat of the U.S. imperialist project in Syria is great news for anyone on the side of anti-imperialism, it is important to keep in mind that that pending defeat also increases the possibility of an ominous “false flag” operation by U.S. imperialism in its last desperate attempt to turn the tide. Reflecting the mindset of U.S. imperialism, the Trump regime released a statement June 27 that said: “We identified potential preparation for another chemical weapons attack by the Assad regime that would likely result in the mass murder of civilians, including innocent children. … If … Mr. Assad conducts another mass murder attack using chemical weapons, he and his military will pay a heavy price.”

Nikki Haley, the U.S. ambassador to the U.N., followed this statement by a Trump-fashion tweet that would make her boss proud: “Any further attacks done to the people of Syria will be blamed on Assad but also on Russia and Iran who support him killing his own people.” Infinitely brazen and shameless hypocrisy expressed in less than 140 characters. All these statements by the representatives of U.S. imperialism amount to nothing more than giving a green light to the terror gangs in Syria, signaling them that they are free to commit any crime with impunity so that the U.S. can blame the Syrian government as a pretext for intervention.

In response to these statements, the Iranian foreign minister Javad Zarif said, “This is another dangerous U.S. escalation in Syria on fake pretext which will only serve ISIS, precisely when it’s being wiped out by Iraqi and Syrian people.”

Russian Senator Konstantin Kosachev called the Trump regime’s statement “extremely reprehensible,” adding that “the accusations could indicate that the U.S. is preparing its own preemptive strike against Syrian troops and play on the chemical weapons issue that has already been promoted globally.

Who used chemical weapons in Syria?

Let us not forget how in April, using as a pretext an alleged Syrian government Sarin gas attack on the opposition-held Khan Sheikhoun in northern Syria, the Trump regime launched an attack at Shayat airbase, a strategic asset for the Syrian government in its fight against the IS. For a recent exposure by Seymour Hersh of how Trump launched the attack “despite having been warned by the U.S. intelligence that it had found no evidence that the Syrian government had used a chemical weapon,” follow this link.

It is indeed a fact that chemical weapons are being used against civilians in Syria by no other force than the U.S. itself. As the U.S.-led coalition entered the city of Raqqa earlier this June, the U.S. Air Force used cluster bombs with white phosphorus as they indiscriminately bombed the city, which has a population of over 200,000. On June 9, the U.S.-led coalition shelled the western parts of Raqqa and the area between al-Mashlab and al-Sinaa neighborhoods using white phosphorus bombs, killing 17 civilians. This inconvenient detail and the fact that the use of white phosphorus is internationally banned have mostly been ignored by the Western corporate media.

An earlier case of chemical weapons use by U.S. forces, in November 2015, is not even denied by the U.S. A Central Command spokesperson openly admitted that more than 5,000 armor-piercing “Depleted Uranium” rounds were used during the air raids performed by the U.S. Air Force in Deir Ezzor and Hasakah provinces. This story was conveniently ignored by the corporate media, whose coverage of Syria more or less amounts to nothing more than parroting the U.S. empire’s propaganda and lies.

The war crimes committed by U.S. imperialism are not limited to the use of chemical weapons against civilians. The indiscriminate airstrikes targeting heavily populated areas by the U.S.-led coalition have caused so many civilian deaths that even the U.N., normally an entity that functions as a diplomatic means to legitimize U.S. imperialism, had to come forward. On June 14, U.N. war crimes investigators stated that U.S.-led coalition airstrikes in Syria were “causing a staggering loss of civilian life.” The numbers expose the scale of the crimes against humanity committed by U.S. imperialism.

Just between May 23 and June 23,U.S.-led airstrikes targeting Deir Ezzor and Raqqa killed 472 civilians, 137 of them children. In the previous 30-day period, about 225 civilians were reported dead as a result of U.S.-led airstrikes. Also worth noting is that these figures are reported by the Syrian Observatory for Human Rights, an entity that has supported the so-called opposition in Syria. This indicates that the real figures for civilian deaths at the hands of the U.S. coalition are most likely much higher than the ones reported by SOHR.

As the U.S. imperialist project in Syria—with the Trump regime at its helm—is close to being defeated by the Syrian government and its allies, there is a greater possibility for reckless military provocations in a last desperate attempt to turn back the course of defeat. This means the potential for a much more destructive regional or possibly global war that directly involves Iran and Russia, a nuclear power.

As progressive and revolutionaries in the U.S., it is critical that we stay alert and ready to mobilize against any U.S. military escalation while we continue to expose the war crimes of U.S. imperialism in Syria and organize in the heart of the Empire to win the poor and oppressed people to the ranks of resistance against U.S. imperialism.