For the Earth and humanity to live, capitalism must end!
End racism, police brutality & mass incarceration!
Fight for socialism!

The Party for Socialism and Liberation (PSL) is running Gloria La Riva for President and Eugene Puryear for Vice President as part of its Vote Socialist in 2016 campaign.

“Capitalism is a corrupt, bankrupt system that is destroying the environment while the super-rich accrue obscene wealth,” stated Gloria La Riva. “The capitalist bankers torched the economy and the federal government bailed them out with our money. What an outrage! Today the criminal bankers are richer than ever while millions of working people have been plunged into poverty. A socialist system shatters this destructive model. Socialism means that the wealth of society, all of which was created by the labor of working people, would be used to create a sustainable environment while providing every person with a decent job or an income for those who can’t work, free education and affordable housing. Socialism means making health care truly affordable by making it free for all people. The military-industrial complex and the Pentagon war machine, with its 1,000 bases around the world, are not for ‘defense’ but for Wall Street’s global empire. It should be dismantled. Massive military production is a complete waste and should be converted to useful civilian production.”

Vice Presidential candidate Puryear said that, “a socialist system would make the highest priority eliminating institutionalized racism, bigotry and inequalities. Police brutality and mass incarceration would be ended. Citizenship would automatically be granted to all people living in the United States. Access to contraception and abortion would be guaranteed to all women. Equality in every area of life would be realized for women and LGBTQ people. Socialism can only be achieved by a mass people’s movement that ends the dictatorship of Wall Street. Join us in building that movement!”

You can read the 10-Point Program of the VotePSL 2016 campaign and also read our piece on “Why Socialism?” 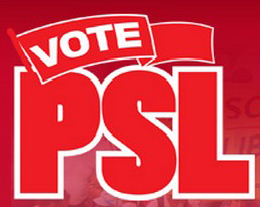