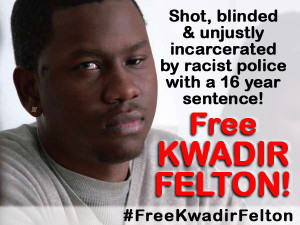 “I got to tell all the things that are hidden inside me of what really happened”–Renee Felton, Kwadir’s mother

“I don’t really do anything for the holidays anymore since all this happened to Kwadir,” Renee Felton, Kwadir’s mother, told Liberation in the one bedroom apartment that she now shares with her daughter.

On Jan 10, 2010, off duty Police Sergeant Thomas McVicar saw 18-year-old Kwadir Felton walking down the street. McVicar shot him through the slightly opened window of his truck after shouting a racist slur before pulling the trigger.

Kwadir was left blinded from the shooting and then charged with a series of fabricated crimes. He is currently serving 16 years in Southwoods State Prison in Bridgeton, N.J. Sergeant McVicar has never been charged for any crime despite his reputation for violence and threats against the people of Jersey City, N.J.

Kwadir has a chance for justice as the paperwork has been filed in neighboring Essex County Court of Appeals and is to be soon assigned.

“They violated all of his civil rights, and whenever you take somebody out of the hospital without doctor approval that is an attempted murder,” exclaimed Renee Felton as she described the treatment of Kwadir after the shooting.

“He had a chance to see out of his left eye, but as they moved him so fast he wasn’t getting the proper treatment that he needed,” she added.

As a result of his injuries, Kwadir struggled initially with severe depression, but he has since fought to overcome that, setting goals to learn Braille and become a teacher.

“Right now he doesn’t have his Braille machine in prison. I spoke with the Commission for the Blind out in South Jersey, and they are going to start working with him after the holidays and teach him other mobility skills and start him in college,” explained Renee.

The unchallenged facts of the case

Despite being laid off after Kwadir’s shooting and also losing her apartment, Renee Felton is front and center in the movement against police brutality. Renee can recite the unchallenged facts of her son’s plight. These facts include the following:

-Kwadir adamantly insists he was unarmed. The police have inconsistent stories about Kwadir’s alleged gun—a gun that did not have Kwadir’s prints or blood on it. The gun was retrieved according to the cops from his left side, but Kwadir is right handed. The cops also state they moved the gun in violation of protocols and then returned it to the scene.

-The undercover narcotics officer who testified at Kwadir’s trial didn’t know who Kwadir was before the shooting by Sergeant McVicar. Kwadir was recorded on five of 20,000 recordings in a sting operation and none of the recordings indicate his involvement in the distribution of drugs.

-The cops’ case revolves around the “conspiracy to sell drugs” charge, which was fabricated after Kwadir was released from their custody on Feb. 11, 2010.

-Sergeant McVicar never submitted any police report on the night of the shooting. It has not been determined yet if he was working as there are no time cards or documents of any kind indicating that he was on duty.

-The police never retrieved the bullet from the scene of the shooting. It is unclear if McVicar used the gun he claims to have used.

– McVicar claims that he shot Kwadir through the glass of his truck window, but there is no evidence that the window was shattered during the shooting.

-McVicar used racial epithets before shooting Kwadir, and his personal vehicle had bumper stickers and other messages indicating that his state of mind was clouded by racial hatred.

-One juror had ties to the police department and another did not attend the day of the jury decision due to medical reasons. No documentation of the medical issue was ever released to Kwadir’s counsel. It is suspected that some jurors felt intimidated by the police.

Building support to push back the cops

Rev. Dr. Herbert Daughtry, veteran civil rights activist, has marched with Kwadir, his mom and sister in the streets for justice. The National Action Network has also spoken on Kwadir’s behalf with the Jersey City Department of Public Safety. Decarcerate New Jersey has documented abuse and intimidation by the cops and prison against Kwadir and his family for speaking out against police violence. But an injustice like this needs a response from people—young and old alike—all over New Jersey and all over the country.

As communities are mobilized, the stories of police murder and terror are being told to a wider and wider audience. The more the truth is told, the more the movement can push back the racist cops and courts—marching a little bit closer to win true justice. For Kwadir, that could mean being released from prison and realizing his dream to complete college to teach blind children.

“We all need your support for his appeal. His appeal is very important for us, to him. There’s so much police brutality that is going around. Not just in Jersey City, New York. It’s all around the country. So I’m asking to help us. Thank you,” concluded Kwadir’s mom, Renee, in the hopes that the movements for justice growing around the country will express support for Kwadir’s case in the coming months.