Bakery workers from Local 37 of the Bakery, Confectionery, Tobacco Workers and Grain Millers’ International Union stood on the picket line directly in front of the entrance to the Rich Products bakery on the corner of Greenleaf Avenue and Busch Place in Santa Fe Springs, California. At least a dozen workers chanted with vigor, “Rich Products! Poor Workers!”

BCTGM Local 37 began their strike on Nov. 3 at a Rich Products-owned bakery. One hundred forty union members, who are mainly Latina immigrants, have maintained the picket line for 24 hours a day, 7 days a week, for 60 days now. Low and stagnant wages, long and physically demanding shifts, a contract that increased the cost of their healthcare, among other grievances, have been the source of the strike.

Rich Products is a large New York-based global food corporation that employs 11,000 workers. The bakery located in Santa Fe Springs specializes in producing ice cream cakes, desserts and pastry products under the Jon Donaire Desserts brand and sells them to retailers like Baskin-Robbins, Cold Stone Creamery, Walmart and Safeway. According to Forbes Magazine, Rich Products ranks number 114 on Forbes list of America’s Largest Private Companies and made $4 billion in sales in 2021.

The company is profiting immensely, yet the starting pay at the Santa Fe Springs site is a low $17 an hour. The living wage in Los Angeles County is estimated to be $28.04 for a family of two working adults with two children. A single mother living with a child would have to make $42.41 to cover her living expenses. $17 an hour is clearly not enough to cover the cost of living in LA County. A worker who wishes to remain anonymous shared: “We don’t have the salary to meet all of our expenses. The economy is very bad. Prices are increasing including rent and basic necessities.”

Eighty percent of the bakery workers are women and an overwhelming majority are immigrants from Latin America. On average, Latina workers are paid 43% of what non-Hispanic white men are paid and 28% less than what white women are paid.

Magdalena Torres, expressed that their employer, Andres Machado, does not consider negotiating a fair contract for his workers a priority. Instead he is focused on continually increasing productivity at the bakery, no matter the strain it puts on the workers.

In May, Local 37 workers were required to meet a quota of 8,000 cakes over a period of time, but production has increased since then to 13,000 cakes over the same period. Workers are sometimes required to work 12 to 16 hour shifts until the quota is met, leading to exhaustion and workplace injuries. If the bakery is short-staffed, a single worker will have to complete what it usually takes two workers to complete until the quota is met. The boss’s increasing demand for productivity at the bakery alongside short-staffing is leading workers to strain and injure their bodies.

Magdalena Torres shared: “Our boss shows up when someone tells him that there is a way to increase production, but he does not come out to talk about our wages. He has not shown up.”

Torres pointed to the blatant exploitation and inequality telling Liberation News: “I don’t think they like to share their profits. We have minimum wage workers that they intend on keeping at that wage, but meanwhile they increase their earnings, to have a better life, better cars, better houses. But workers are stuck with the same wages and the same car that sometimes runs and sometimes leaves us stranded on the freeway.”

Rich Products continues to profit off of these workers, squeezing them to produce more and more, meanwhile paying them not enough to survive and even increasing workers’ health insurance rates.

Rich’s recently negotiated a health coverage plan that will charge the bakery workers a higher monthly rate. Bakery worker Miguel Perez shared that he has been paying $120 per month to cover his entire family, but with the new contract he will have to pay somewhere between $400 to $700 per month.

Workers at the bakery in Santa Fe Springs are overworked and not properly compensated, and now they are outraged at having to pay more for their health coverage as the physically taxing workload continues to increase.

BCTGM Local 37 workers do not intend on returning to work until their demands are met. They expect the increase for their health coverage to be scrapped, they expect to receive a raise, an improved pension and retirement benefits. Since the strike began, members of Local 37 have gotten to know each other so well that they now consider themselves a family.

Miguel Perez spoke about their experience on strike so far: “We’ve been out here for almost two months. We’re starting to see that the company is losing money. We’re working on stopping trucks from making deliveries. We don’t have anything to show financially yet, but these are still victories. I estimate they’re losing between half a million to a million dollars a day because we’re out here. Unfortunately, this is what has to happen. They only hear us if we hurt their pockets, so that’s what we’re trying to do.”

One of their spirited chants that neighbors and passersby could hear echoing from the picket line was, “Un dia mas! Un dia mas fuerte!” or “One day longer, one day stronger,” which perfectly captures their commitment to maintain the strike through heavy rain, the holiday season, and until their demands are met.

You can support BCTGM Local 37 workers by joining their strike in Santa Fe Springs, Calif., and donating to their strike fund. 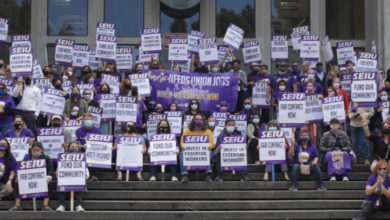