On Monday, February 26, Manatee and Sarasota activists held a call-in day to Bradenton City Council. “Black Communities Matter! No to the 1st St. Flyover” urged city councilmembers to reject the Florida Department of Transportation’s (FDOT) proposal to build an elevated highway running from Palmetto and across the DeSoto Bridge to US 301 near Red Barn in Bradenton.

“FDOT intends to construct a ‘flyover’ through the middle of Black communities in Bradenton,” said Answer Suncoast activist Juliana Musheyev. “This will affect the property values of the neighborhood, the historic Black churches that are the center of community life and the business corridors that are vital to the local economy and local employment.”

There are traffic problems in Manatee County, but they do not originate with the minority communities of Bradenton and definitely need not be solved by a flyover at the DeSoto River, which would disproportionately affect Black and Latino residents.

Despite other options and controversy even among city councilmembers themselves, the plan “to benefit business owners, their employees, tourists and commuters,” would really chiefly benefit high speed North-South drivers who could completely bypass Bradenton and Palmetto.

The 1st Street Flyover option is not the only way to address the traffic challenges in this area. According to Catherine M. Hartley, director of Planning and Community Development for City of Bradenton, the best option would be to not build anything at all, but simply to expand I-75, given that these traffic challenges are regional rather than local.

Based on her interpretation of FDOT’s ‘Central Manatee Network Alternatives Analysis’ study, Hartley indicated that not only would the proposed location of the flyover harm Manatee’s historically Black community, but it would also fail to solve the area’s traffic problems. In fact, rather than alleviating traffic, the 1st Street Flyover would actually make the traffic in the area 11 percent worse.

Manatee NAACP President Rodney Jones explained to Liberation: “We’ve heard from people all over the country—from California, Atlanta, and Washington DC—in support of our fight against the Department of Transportation. Traditionally these transportation departments run projects through the community without regard to the social fabric of the community or the economics of the community. There is a long history of doing this, and it is nothing new.”

The flyover would likely cause property values to nosedive due to traffic, noise and air pollution. Community safety would suffer and there is a possibility that local churches would be among the buildings demolished. Two Community Redevelopment Agency (CRA) districts entitled to federal money as they are below the poverty line would be deprived of promised redevelopment and elimination of “blight and slums.”

Would businesses, commuters and tourists really benefit from this plan? Not local businesses, as high speed traffic would bypass the last remaining Bradenton and Palmetto business corridor. Nor would local commuters, as there would likely be new and increased tolls within the area according to an estimate in FDOT’s master plan.

Local community residents, predominantly Black and Latino, have so far been excluded from full access to the public workshop process. FDOT held a series of public workshops outside of the targeted community at which survey cards were distributed. There were 11 proposed alternatives but the 1st Street proposal was the preferred target. The survey cards, from mostly white communities, showed 71% support.

After being confronted over its racial discrimination, FDOT held a “community meeting” at St. Mary’s Baptist Church in the Black community and approximately 125 people attended who were adamant they did not want the flyover. Organizers became aware, after the meeting, that they were not given survey cards.

Jones recently went before the Advisory Board to publicly state the community has retained a civil rights attorney, Arthur Huggins, Jr. from Daytona, who is investigating possible civil rights violations.

Just as with the Tampa Expressway expansion proposed a couple of years ago and still on hold due to widespread public opposition, historically Black neighborhoods would be sacrificed by FDOT’s highway in Bradenton. There is a long history of similarly racist development under capitalism. Black and brown communities often become the location of toxic waste facilities, pipelines, and gentrification, with the concomitant displacement, unemployment, disease, poverty and incarceration. 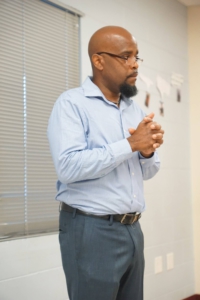 As NAACP’s Rodney Jones asserted, “It is important that we fight back against FDOT because historically when these structures go into communities, especially distressed communities such as ours, it is absolutely devastating to the local economy, to the social fabric of the community.”

Answer Suncoast, NAACP, Party for Socialism and Liberation and others intend to keep building opposition to FDOT’s racist proposals. Activists are planning future meetings and protests and have started circulating a petition.