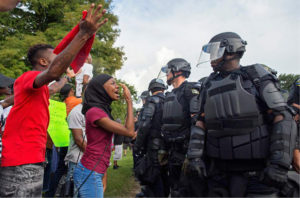 On May 26, Louisiana governor John Bel Edwards signed into law the nation’s first ‘Blue Lives Matter’ law. According to the governor, the law is meant to give “every protection” to “true heroes.” In reality, the law is an attack on the Black Lives Matter movement, from its mocking nickname to the actual details of the law.

The law extends hate crime protections to emergency responders, including not only police officers but also firefighters and EMTs. Prior hate crime legislation has only applied to constitutionally ‘protected classes’ including race, gender, sexual orientation, disability, and age. The Louisiana bill is the first time hate crime protection has been extended on the basis of employment, a choice, rather than immutable personal characteristics.

Hate crime laws allow extra charges and penalties to be attached to standard misdemeanor and felony charges. Under the Louisiana law, those convicted of a felony hate crime against an officer could face an additional $5,000 in fines or up to fives years in prison; misdemeanor charges could have $500 or six months imprisonment tacked on.

Louisiana was the first state to pass such a law but is unlikely to be the last. Similar bills have been proposed in Kentucky, Tennessee, Texas, Florida, and in Chicago. There has even been a bill proposed in Congress that would amend federal hate crime statutes to include crimes against police officers. In the wake of the events in Dallas we could see an avalanche of such bills in more states and cities.

Such bills are unlikely to face any serious opposition within many local governments, as politicians can benefit politically from being seen as defenders of ‘law and order’ who stand with police. The only, though important, opposition to the Louisiana bill came from the state chapter of the Black Youth Project 100. Their demand that Governor Edwards veto the bill was ignored.

As the movement against police brutality reignites in the wake of the executions of Alton Sterling and Philando Castile, protesters across the nation are already being arrested and charged with a variety of trumped up misdemeanors and felonies. Over a hundred protesters have already been arrested in Baton Rouge, the city where Alton Sterling was murdered, including PSL presidential candidate Gloria La Riva. How many will be charged with battery because a cop scratched his arm tackling a protester? How many will be charged with ‘inciting a riot’ after the police deployed chemical weapons against unarmed civilians? How many of these charges could be inflated if the new law is deployed against the protesters?

This is the reality of ‘Blue Lives Matter’ laws. They are intended to further criminalize dissent and discourage opposition to our domestic occupiers. Despite the heated rhetoric from the cops’ so-called unions, there is no war on the police. Last year was one of the safest on record for police officers since prohibition ended. In fact, garbage collectors, construction workers, steel workers, and truck drivers are all at greater risk than cops, all while providing services that actually benefit society. The true war is the one the police and the bourgeois state are waging against Black lives and those who would defend and be in solidarity with the new Black struggle. In this war, ‘Blue Lives Matter’ laws are not a shield but a sword.

As anti-racists and socialists we have a duty to resist the implementation of these laws at every turn. We must continue to join the movement in the streets to defend Black lives and end police terror. When the bought-and-sold politicians and their armed thugs tell us that it is really blue lives that matter we must lock arms with our sisters and brothers in the streets and roar back, “Black lives matter!”