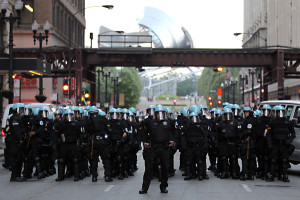 In Rogers Park, where I am running for alderman in the 49th ward, a car parked on a residential street was fire bombed on Sept. 13. The burnt out car is reportedly owned by Bang Da Hitta, a Chicago rapper. This incident and a recent spike in shootings in the neighborhood has led to calls for greater police enforcement.

Don Gordon, who is also running for alderman, has called for the police to lockup Bang Da Hitta for the crime of making rap videos and being an alleged gang member. He has also called for the shuttering of what he calls “problem” buildings where the tenants are predominantly poor and Black.

Alderman Joe Moore has been silent while the police have been conducting nightly large scale operations, which have included the use of helicopters.

I’m going to get straight to the point: The CPD isn’t used to fight crime or stop violence. Calling on them to escalate their operations is no solution to the problem. Modern police forces have had over 200 years to do something about violence and crime. In the United States they have acquired military weapons, military communication systems and military infrastructure. None of it has worked.

Starting in the 1980s, they said mass incarceration would be the solution. That’s nonsense. Of course it hasn’t worked.

In fact, the CPD and police forces across the nation have systematically targeted the Black and Latino communities for mass arrest and brutalization. Every 28 hours a Black man is killed by a police officer in this nation.

In Chicago, racist police officers gun down unarmed Black people in the street with impunity. They harass and detain Black youth at a rate almost five times higher than whites. In Rogers Park, the police regularly harass Black and Latino youth. The only serious violence I have seen with my own eyes living in Rogers Park is the violence of cops against young Black people.

The unemployment rate for Black youth in Chicago, according to the Urban League, is close to 100 percent. The capitalist system cannot provide for everyone. So the system uses racism to keep Black communities poor and the police forces are used to help maintain poverty and apartheid-like conditions by occupying the Black community.

If we want to solve crime and violence, we have to get at the root. We don’t need any more chains and shackles around the wrist and ankles of young Black people. That’s got to stop, right now. The only way to bring peace to our city is to eradicate poverty and racism and disarm the police.