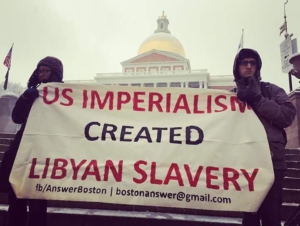 On December 9 and 16, rallies, speak outs, and demonstrations were called in Boston to denounce slavery in Libya.

On December 9 the Boston chapter of the ANSWER Coalition (Act Now to Stop War and End Racism) called a demonstration to “Speak Out and March against Slavery in Libya.” The action was endorsed by Stuck On Replay; Boston Coalition for Freedom, Workers World Party-Boston; the International Action Center-Boston; Stonewall Warriors; Team Solidarity of United Steel Workers of America Local 8751; Class Struggle Education League; ACT UP – C.L.A.S.S.W.A.R. and United for Justice with Peace. On December 16 the Afrimerican Culture Initiative called a demonstration in which the ANSWER coalition participated in and marched.

The gathering on Dec. 9 of about 50 people on the steps of the Massachusetts Statehouse took place on a cold snowy day. The speeches were brief and lively and fired up the crowd as they steadfastly spoke out and reflected on the tragic situation in Libya.

All of the speakers, from the ANSWER Coalition, to Mass Peace Action, the PSL and WWP denounced the phony “humanitarian war” narrative pushed by the bourgeois press in the lead up to the war. In particular, the “leftists” that lined up with the White House, NATO, the CIA, the Pentagon, the IMF and the corporate media were denounced for their complicity in cheering on the “revolution” in Libya which has been thoroughly revealed to have been a reactionary Islamist movement backed by U.S. and European imperialism and its running dogs in the region.

The lie of humanitarian war was spread alongside racist lies that former President Gaddafi gave Viagra to Black men and turned them into rapist-mercenaries to be used against the “rebels.” Such racist concoctions are the same justifications that white supremacists have historically been used against Black men in the United States.

In 2011 the mentality of supporting nebulous “rebels” in Libya was very common. The bourgeois press from CNN to Fox depicted these reactionary currents as “freedom fighters.” The struggle that broke out was framed as one of “Gaddafi the dictator vs. the people.”

This same corporate owned media is near silent about the fraudulent elections the U.S. imperialists support in Latin America, the theocratic dictators and monarchs propped up in Saudi Arabia. Never do they frame the cause of the Palestinian people as a struggle against any kind of “dictatorship” – in fact these imperialist claptraps claim the actually existing apartheid regime to be the Middle East’s “only democracy!”

The speakout on the 9th honed in on the hypocrisies of the bourgeois media and how they manipulate the people’s minds by relying on traditionally left wing tropes about “human rights” and struggling against oppressive regimes. One speaker, Steve Kirschbaum of the United Steelworkers Local 8751 addressed the fact that “millions of people rallied behind the Gaddafi government” during the Arab Spring era and the bourgeois media did not cover it. To reveal the truth, that there was a wellspring of political support for the Gaddafi-led government would have shattered the myth that this was an “unpopular” regime or that this was a situation of “the people vs. the dictator.”

The speak-out highlighted the role of the peace movement as Duncan McFarlane from Mass Peace Action spoke about the need to resist the corporate media. He also emphasised the necessity to stand together for peace even when it is unpopular, reminding those gathered of the legacy of Dr. Martin Luther King, Jr. and his analysis of the “three evils” of the United States being racism, militarism and poverty. When Dr. King spoke out against the Vietnam War he faced severe isolation and increased state repression, but he realized that he had a duty to all poor people not just those that reside within the boundaries of the U.S. He asked, how can one be against the violence of another government and not be against “our own” government which is the “greatest purveyor of violence in the world.” It was the regime of Barack Obama that initiated the war against Libya. Obama, who was somehow heralded as a signal of racial progress and the superiority of liberalism, ironically bombed the most prosperous African nation and created the conditions for the enslavement of Black people in Libya. The country is now riddled with internal problems that can only be, in the final analysis, resolved by the Libyan people and their own movement.

Several other speakers made connections to the role of the corporate media in the prelude to war. CNN, which “broke news” when it aired footage of a slave auction in Libya was beating the drums of war in 2011, regurgitating the U.S. State Department line as if it were truth.

Nino Brown of the ANSWER Coalition had this to say about the ANSWER banner and slogan (“US Imperialism created Libyan Slavery”):

“Prior to the NATO intervention, Libya was the most prosperous nation in all of Africa. Libya under the leadership of Gaddafi drastically improved the living standards of the Libyan people. Universal healthcare was available to all of the Libyan population. Average life expectancy, which was around 55 years in 1969, was over 70 years in 2011, and has not increased since then. The average literacy rate of Libya reached 91 percent, one of the highest rates of literacy in Africa and comparable to countries in Europe. School enrollment in Libya was also among the highest in Africa. In 2010, Libya had the highest Human Development Index score in all of Africa, an index used to measure the level of development in every country. Libya had very low rates of malnourishment, which was under 5 percent. Poverty likewise was minimal, with less than 10 percent of the population living below the poverty line, which gave Libya one of the lowest poverty rates in Africa and in the world. Oil production was close to two million barrels per day before 2011 but dropped to less than 400,000 barrels per day afterward.

“Some still claim that something of a “revolution” occurred that was a part of the Arab Spring movements. This is false. The Western states, led by American, French, and British imperialism used their position in the UN Security Council to activate their “responsibility to protect” and pass Resolution 1973 which led directly to the arming of reactionary Islamists, ethnic cleansing of black Libyans, targeted assassinations of pro-Gaddafi civilians, and bombing civilian population centers with vital infrastructure that held no military utility. As migrants, particularly black Libyans, tried to escape the country, they faced a perilous journey to reach Italy where they would be refused entry and forced to die at sea. All of this was in 2011 and 2012 and where was CNN? Where were these states that are so quick now to call “special” UN meetings to condemn the Libyan people for their slavery?”

We must continue to agitate, educate, and organize against the slavery in Libya but do so from a principled basis rooted in internationalist politics that cannot cow to the bourgeois lies of corporate media. We must continue to expose the ways in which the media colludes with the military industrial complex to “manufacture consent” and spread the lies of “humanitarian intervention.”

The ANSWER demonstration ended at the UN Office where they read a letter from Dr. Salem Zubeidy of the Revolutionary Committees Movement titled “A Message to our brothers and sisters in Africa and in the Diaspora.”