By Hersch Rothmel and Lev Kendrick 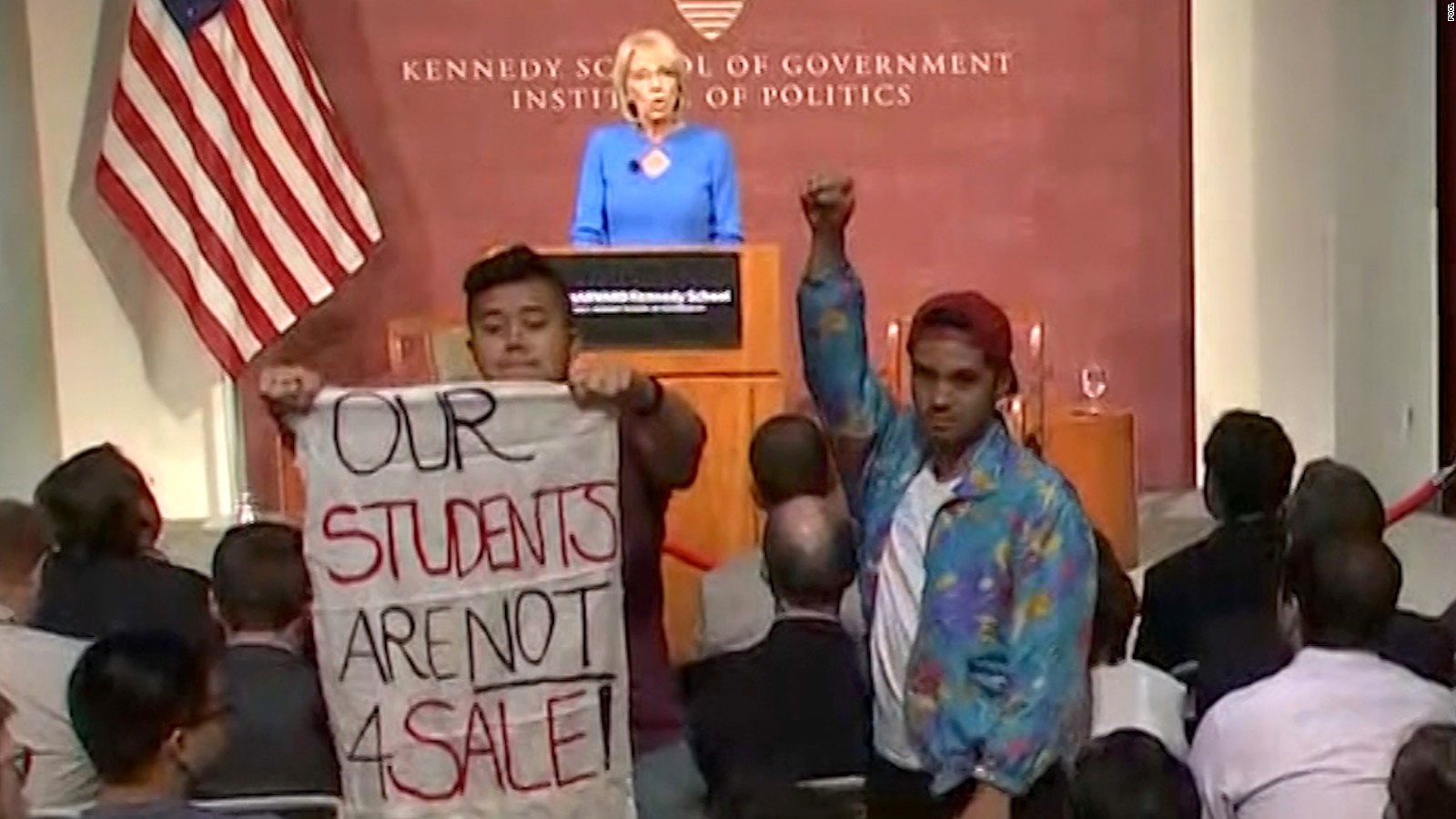 On September 28, over 250 people gathered outside of the Harvard Kennedy School of Government to protest an event featuring Secretary of Education Betsy DeVos. Protesters held signs stating “Children are not
commodities” and “Dump DeVos Dump Sagan,” referring to Massachusetts board of education member Paul Sagan’s recent $500,000 donation to pro-charter front group Families for Excellent Schools. Other signs
demanded DeVos stop her attack on Title IX protections,which among other things, provide protections for victims and survivors of sexual assault on college campuses, while others called on DeVos to end her war on trans students.

Metal gates provided a 50-foot barrier between the crowd of protesters and the Kennedy School doors. Uniformed police officers lined the barrier. Additionally, the event was only open to people affiliated with Harvard and bags were scrupulously checked upon entry. As usual the Harvard Kennedy School set itself up to create an echo chamber of bourgeois reaction and elitist opinions.

Even more horrendous, was the fact that one participant was singled out by undercover police and subsequently questioned about “Where are you from?” When the attendee said they resided in the Boston area, the cops pushed further, saying “No, where are you really from? You’re being difficult.”

At this point, the attendee refused to answer any more questions. Fortunately, marshals for the demonstration stepped in and were able to avoid a more serious confrontation. However, this type of profiling and harassment on the part of the Boston Police Department provide yet another example of the police-state’s obligation to suppressing dissent and protecting the ruling class.

The demonstration was incredibly lively, united, multinational, and energetic. Protesters loudly chanted “Education is a right not just for the rich and white!” and “Trans rights are human rights!” At one point, the MC emphatically declared “I think Betsy can hear us!” In response, the entire crowd, supported by a brass band, crescendoed into a wave of joyous noise. Yet another chant was sung to the tune of “When the saints come marching in” with the lyrics changed to ”When the schools belong to us.”

This chant in particular spoke to the crowd’s demand that public education remain public and that the war on poor, Black, and Brown communities vis-a-vis the privatization and militarization of public education immediately come to an end.

Speakers lambasted DeVos’s proposed policy of more extreme charterization and privatization. In addition they called out her dismal history of attempting to destroy public education, via school vouchers, in Michigan.

An educator from Western Massachusetts made the class and race dynamics of privatization abundantly clear, stating that charter schools prey on poor, Black, and Brown communities. She also spoke to the fact that charter schools provide atrociously few disability services and maintain a Eurocentric curriculum.

Disability rights organizer and Harvard graduate student Colin Kolick, spoke out against DeVos’s proposal to leave Americans with Disability Act and Individuals with Disabilities Education Act compliance up to the states. This type of policy, he said, would push students with disabilities even further to the margins of the U.S. education system.

Moreover, speakers highlighted Massachusetts’ local struggle against charterization. Speakers applauded the defeat of Ballot Question 2 last November which would have raised the cap on charter schools. However, they held no illusions about the ceaseless war against public education. A mother of three children in the Boston Public School system called on public officials to stop closing schools in Black and Brown communities, effectively displacing the children that attend them.

Inside, students carried out a largely silent protest. One by one students unfurled banners that read “white supremacist.” Other banners read “educational justice is racial justice.” Students also asked DeVos why she revoked Obama-era Title IX policies and how much she stands to profit from the implementation of her proposed educational policies. DeVos evaded giving any real answers to these questions with vague prepared remarks.

Furthermore, DeVos’s speech on “parental choice” was part of a larger all-day conference on school choice sponsored by the Koch Brothers. The conference featured lectures on the benefits of vouchers and the impact of technology on school choice. It was essentially a day-long exploration into how to intensify the destruction of public education and make private corporations billions of dollars off the backs of poor, Black and Brown students.

Brian Leonard, an educator and progressive unionist from Worcester Massachusetts, who participated in the action stated, “We are fighting for all students, regardless of race, ability, or residency status to get a quality education. We are fighting for all schools to be fully funded and fully staffed.” Leonard went on to explain, “We are seeing increasing forms of privatization through vouchers and charters, and now also in the form of what DeVos is proposing, Edtech, which is a computerization model of education.”

Leonard also described the Massachusetts Digital Learning Alliance as just one example of Edtech’s educational model breaking ground throughout Massachusetts. Of course, the introduction of technology into
the classroom has little to do with increasing the quality of education. Instead, it is used as a means of fattening the already overflowing pockets of technological plutocrats like Mark Zuckerberg and his wife Priscilla Chan and Bill and Melinda Gates, as well as gut teacher unions and dismantle worker rights.

The Harvard Kennedy School of Government regularly brings the ring bearers of neoliberal capitalism, imperialism, and protofascism to its lecture hall. Just this year, local organizations including ANSWER Coalition shut down events featuring Steve Bannon and Henry Kissinger. As shown through its chosen speakers, the Harvard Kennedy School’s mission is to train the next crop of oppressive and exploitative ruling class elites. DeVos is just the latest example of the Kennedy School’s commitment to that mission.

As DeVos continues her crusade against public education it is important to remember that public education has been under attack for decades and that both Clinton and Obama-era policies constructed and reinforced the neoliberal paradigm currently dictating educational policy. As with Trump, we must view DeVos as a symptom of a much larger problem: capitalism. Without contextualizing DeVos’s rise to power we cannot
effectively fight the vicious attack on public education.