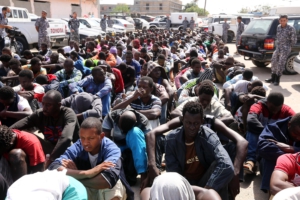 Seven years after the imperialist-sponsored war on Libya, which ousted nationalist leader Muhammar Gaddafi, some bourgeois media outlets are beginning to cover the true effects of that war, namely the re-introduction of chattel slavery in the country.

Today the bourgeois press, like CNN, is reporting on the tragedy of Libyan migrants being captured and sold in modern-day slave markets. One report claims that Libyan migrants are being sold for as little as $400 U.S. dollars or 600 Libyan dinars.

One reporter, Nima Elbagir claimed that she “saw men sold off in a matter of minutes” in Tripoli “by a man dressed in camouflage gear, who referred to them as ‘merchandise.’”

Reuters recently published an article entitled, “World turns blind eye to Libya slave trade: photographer” enabling the same sort of liberal guilt trip that disallowed material solidarity with the Libyan people when they needed it most: when they were targeted by U.S. imperialism for “regime change” and bombed into a “failed state.” During the time, the bourgeois press, and even some of their useful fools on the Left imagined that something of a “revolution” was going on. History has not absolved this position.

Even at the time of the said “revolution,” which led us to this sad state of affairs today, the darling “rebels” of the imperialists and social-imperialists immediately after taking control of Benghazi started an anti-Black African lynching spree.

Numerous dark skinned Libyans and sub-Saharan African workers were lynched in city streets. This was the fruit of the so-called imperialist sponsored “Libyan Revolution” of which the U.S. imperialist class claims was waged against “the dictator Gaddafi” and for “human rights.”

The New York Times reported on the dire conditions of this enslavement of Black Libyans and sub-Saharan migrant workers: “The International organization for Migration estimates that there are 700, 000 to one million migrants in Libya, and more than 2,000 have died at sea this year. Most of the migrants are fleeing armed conflict, persecution or severe economic hardship in sub-Saharan Africa. Their journey usually begins with a deadly trek through the vast deserts to Libya and then involves either braving the Mediterranean Sea on rickety boats headed to Europe or struggling to survive in one of the overcrowded detention centers run by smugglers on the Libyan coastline. Forced labor, sexual abuse and torture are widespread in these camps, according to the United Nations.”

The New York Times, the liberal mouthpiece for war and ironically home of the humanitarian crocodile tears for military interventions they shilled for, claim that Libya “slid into civil war” and still maintains that there was some “popular revolt” against the “brutal Gaddafi regime.”

A look at the facts shows a different reality. Libya was the most prosperous nation in all of Africa and by far one of the most supportive of nationalist and socialist movements. The Libyan government historically supported the Irish Republican Army, Palestinian Resistance to Zionist settler colonialism, and the militant fighters of the anti-apartheid movement in South Africa. In addition, Libya retained friendly relationships with other anti-imperialist nations like Venezuela under Hugo Chavez and the Democratic People’s Republic of Korea (DPRK).

As the media makes rounds about this “revelation” about the neo-slavery going on in Libya, it is our duty as revolutionaries to not let history and the recent class struggle escape us. The lessons of Libya must be synthesized and the ruling imperialist class must be exposed for their phony humanitarianism so we can sharpen our anti-imperialist struggles and bolster our support for national liberation movements.

It is important that before we discuss the reality of the re-introduction of slavery that we do so from a historical perspective of proletarian internationalism, anti-imperialism and revolutionary Marxism. As the great Marxist educator Paulo Freire said “… one cannot teach conflict as if, all of a sudden, it fell from the sky. The conflict must be anchored in those competing histories and ideologies that generated the conflict in the first place.” It must be stated widely and emphatically that the U.S. imperialist intervention in the name of “humanitarianism” and the “responsibility to protect” was a predatory dirty war on a sovereign independent nation rooted in a progressive 1969 coup, the Al-Fateh revolution, which opposed imperialist interests.

Now that the bourgeois press is reporting on how the “world is turning a blind eye” to the re-emergence of the slave trade in Libya liberals and the phony humanitarian groups will come out of the woodwork with their denunciations, as they should. But they should also realize what led to this situation and how their political lines have enabled this human catastrophe. It was the “humanitarian” imperialist campaign that disarmed the anti-imperialist movement prematurely and caused serious hampers to building united front efforts to agitate against “our own” imperialist government and their role in orchestrating the destruction of Libya.

No such thing as a “humanitarian” war for imperialism

The war on Libya created the social disintegration that facilitated the creation of slave markets for Black African migrants, many of whom are from Nigeria, Senegal, Gambia and West Africa in general. Migrants, according to Reuters, “are traded for between $200 and $500 and are held on average for two or three months.” These fleeing migrants once captured, face not just super-exploitation from the imposition of slavery but also mass sexual violence. Ironically, one of the founding myths the imperialists employed to beat the drums of war back in 2011.

The bourgeois press, like CNN and even Al-Jazeera, claimed that President Gaddafi had recruited armies of Black African men and gave them Viagra and instructed them to carry out mass rapes. However, later after the Libyan state had been smashed, Donatella Rovera of Amnesty International said in an interview with the French daily Liberation, that Amnesty had, “not found cases of rape… Not only have we not met any victims, but we have not even met any persons who have met victims. As for the boxes of Viagra that Gaddafi is supposed to have distributed, they were found intact near tanks that were completely burnt out.”

Once this lie was exposed, other pro-war outlets like the BBC tried to keep the lie afloat by claiming that the rape victims were failing to speak out because they were afraid of being the target of “honor killings,” of which there is no history of in what was modern Libya.

The mythologies that Gaddafi had an army of money hungry Black Libyan rapists hopped up on Viagra and that the government had no popular support is just simply not true. The Gaddafi government had historically incorporated Black Libyans into the political superstructure and used the nation’s oil resources to support social welfare programs as well as invest in African independent economic development. In fact, the Gaddafi government pledged to invest $97 billion into Africa to free it from Western influence on the condition that “African states rid themselves of corruption and nepotism.”

All wars are based on some foundational story or narrative that justifies their existence. In bourgeois society, where class tensions and conflict are constantly being glossed over or concealed via the bourgeois press and ideological institutions, it is the duty of revolutionaries to “stand for truth no matter who it is for or who it is against,” as Malcolm X taught. In addition, living in the foremost imperialist nation, we have a special duty to the oppressed of the world seeing as how the government of this country is actively suppressing popular movements for social justice and liberation all over the world while actively supporting reactionaries and counterrevolution.

The war on Libya was based on quite a few foundational lies mired in racism and colonialism. One being that there was a genocide going on in Libya waged by Gaddafi and forces loyal to him. Another was that Gaddafi was giving Viagra to Black Libyans to go out and commit mass rape. We also heard stories about Gaddafi indiscriminately “killing his own people” in
the suppression of a “popular revolution” and the all-time liberal imperialist favorite “for democracy and freedom from dictatorship.”

There were many more lies told about Libya on the eve of its destruction, but these were the most prominent ones as they still linger today in many political circles even those that consider themselves to be “revolutionary.”

All of these lies were not true or even half-truths at best. There was no genocide when Gaddafi was in power, but we do know that there was genocidal violence against Black Libyans and mass lynchings carried out by the so-called “rebels” that the U.S. was backing at the time. One has to wonder, where was the bourgeois press then? Where was their “outrage” and chastisement for the world “turning a blind eye.” A year after the conflict began, some news outlets reported on the forced feeding of Black Libyans “the flag of Gaddafi,” at the hand of the rebels.  The flag symbolized the nationalist revolution in 1969 led by Gaddafi, which kicked out U.S. imperialism’s bases and nationalized some of the commanding heights of the economy to create social welfare benefits for Libyan workers and farmers leading to the highest levels of human development in all of Africa.

Anti-imperialism at home and abroad

On Nov. 18 in Paris, hundreds of protesters, mainly led by young Black people, demonstrated in front of the Libyan Embassy in central Paris. They were met by police repression as they denounced the re-introduction of slavery in Libya. Protestors had signs that read “Free our brothers” and “Put an End to the slavery and concentration camps in Libya.”

These brave young activists, many of them young Black people, are on the right path. We must follow in their footsteps and build the struggle. According the the New York Times, one protester stated: “We have to mobilize — we can’t let this kind of thing happen. Did we really need to see such shocking pictures before taking a stand? I don’t think so?”

The destabilization of Libya by U.S., French, and British imperialism has led to the rise of ISIS, Boko Haram, and the migration crisis in Europe. Their actions have emboldened the far rightwing, which uses the declining imperialist economies to scapegoat immigrants and people of color to spread their racist lies to justify why they oppress us.

We stand with the Black African migrants and those enslaved in Libya and beyond as a result of the 2011 NATO war on the country. We must always remember that the enemy is at home and we must work to do all we can so that our own governments are held accountable for spurring on the destruction of sovereign and independent states. 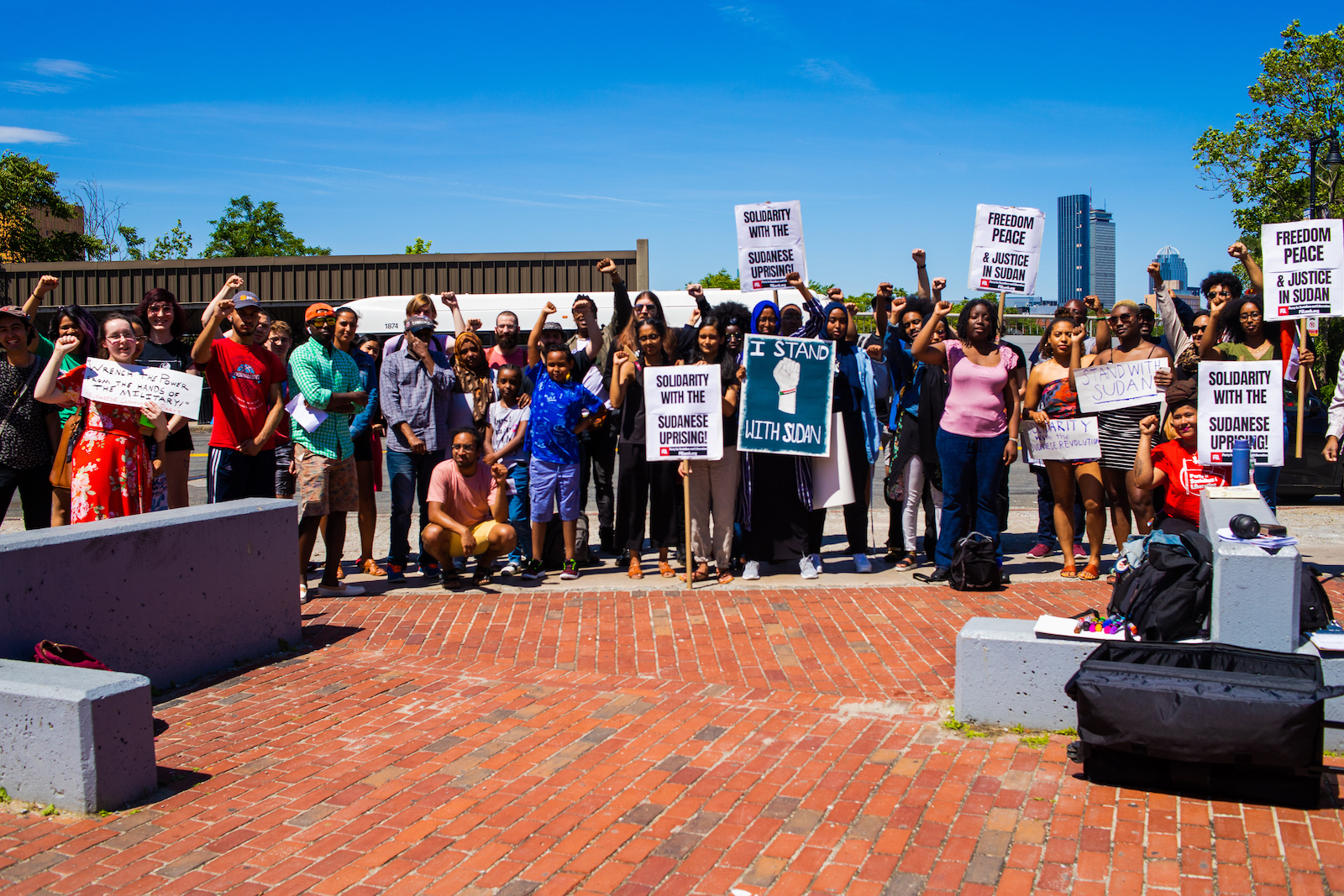 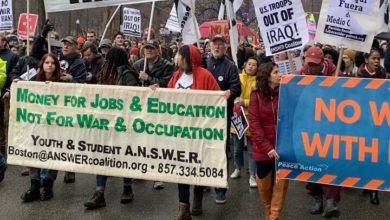 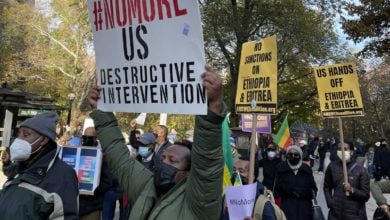