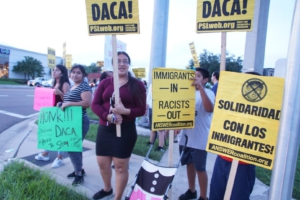 On Wednesday, September 6, around 40 people gathered in Bradenton, Florida to protest President Trump’s decision to end the Deferred Action for Childhood Arrivals program, known as DACA. At the intersection of U.S. 41 and Cortez Road, demonstrators held signs saying, “800,000 dreams can’t wait”, “Education not deportation” and “Legalización: Full rights for all immigrants!”

The protest came while many residents were evacuating and boarding up their houses to prepare for Hurricane Irma. Manatee County, which has a strong and vocal immigrant community, has declared a state of emergency and hurricane watch.

On Tuesday, the notoriously racist Attorney General Jeff Sessions declared from the Justice Department that DACA was rescinded. Sessions called Dreamers “illegal aliens” and falsely claimed that DACA ran against the “rule of law” and “constitutional order”; in reality, deferred action and employment authorization for those who receive it are well within the discretion of the executive branch.

DACA was an executive order signed by the Obama administration in 2012, the result of years of protests by Dreamers at ICE facilities, detention centers and federal buildings. The policy granted a renewable two-year period of protection from deportation, work permits and traveling rights to certain youth who had arrived in the U.S. before their 16th birthday and prior to 2007.

Nearly 800,000 such young people are recipients of DACA. They are known as “Dreamers”, after the DREAM Act, a legislative proposal introduced in 2001 that would give certain young undocumented immigrants a path to permanent residency. 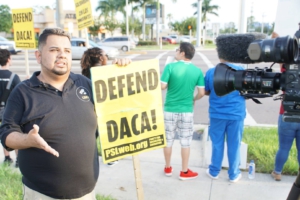 Now that Trump has rescinded DACA, Congress will have six months to pass legislation that offers some form of replacement for the DACA policy. In response, immigrant and activist communities around the country are getting ready to organize and unite masses of people to force Congress to protect Dreamers and other immigrants.

“I’m out here to defend DACA. I myself am a DACA recipient,” said Luis Garrido, who has lived in Bradenton since the age of four. “I’m glad I fall within the two year period so I could possibly still receive mine, however if I don’t, it’s not going to matter, because I’m going to stay here and keep fighting for it.”

Garrido’s parents came many years ago to Bradenton from Venezuela. “I would not even know what to do over there. I don’t think I would be a full-fledged member of society. When I think of home, I think of Bradenton, Florida,” he said.

Patricia Lara, whose parents came from Mexico, is also a Dreamer. Liberation News spoke to Lara as she held her niece Alyssa in one hand and a protest sign in the other.

“I’m a DACA recipient and I’m actually a victim advocate for sexual assault victims in Sarasota,” said Lara, who started as a volunteer at the rape crisis center but was able to become an employee after receiving her DACA papers. “The fact that he’s rescinded DACA means that I will no longer be able to do my job anymore, to help the community like I do on a daily basis.

“It’s not fair, I feel like I have done everything right. I have poured my soul into this country since I was a little girl, I know no other home. I grew up in Oneco! So it is very heartbreaking. I feel betrayed,” Lara told Liberation.

Other demonstrators came out to support their Dreamer family members and friends. Victor Manliquez and his daughter Vita attended Wednesday’s rally to support the rights of Victor’s wife and Vita’s mother. Her parents came from Mexico when Manliquez’s mother-in-law needed medical treatment for cancer.

“We’re trying to see what can happen with this six-month grace period. We’ve considered relocation, maybe heading to a sanctuary city. But I’ve lived here all my life. I was born in Bradenton. It’s not so easy to just up and leave,” said Manliquez.

Brandon Garcia and his mother Melissa Apolinar attended the rally to stand up for Melissa’s daughter-in-law and Brandon’s girlfriend, who attends State College of Florida and works at Auto Zone to pay her way through school.

“I’ve been with this girl for several years and she’s very important in my life. Now I’m scared that someone could take her away because of her legal status,” said Garcia. “Sending her back to a country that she doesn’t even know, I feel is inhumane and completely wrong.”

“It really upsets us. She’s a good girl. She does everything she needs to do, she’s a hard-working person, she doesn’t have any criminal background, she’s very smart,” said Apolinar. “We hope [Congress] makes it a law, so people are allowed to stay, to keep this program.” 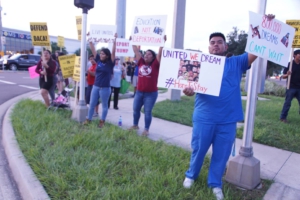 Demonstrators received lots of encouragement from drivers honking and waving as they drove by. They chanted “Say it loud! Say it clear! Immigrants are welcome here!” and “Defend D-A-C-A! Immigrants are here to stay!” Dreamers shared their stories with each other and to reporters with the Bradenton Herald and Herald Tribune. They were supported by many Latinx residents of Manatee County, as well as Party for Socialism and Liberation, Answer Suncoast, Black Lives Matter Manasota, IWW, Project Light and other organizations.

At one point, a clearly intoxicated white man stopped his motorcycle at the corner of the intersection and aggressively approached demonstrators. By filming the interaction, organizers were able to prevent police harassment of anyone attending the rally while the man was arrested.

At the end of the rally, everyone formed a circle to listen to the powerful words of Dreamers, community members and organizers. They discussed building the local movement to defend the rights of immigrants and people of color.

“We’re going to have to come to the streets and put pressure in order for us to have anything before the six months is up for the Dreamers. We are looking for full rights, not just for Dreamers, but for all immigrants,” said Ruth Beltran, a member of Party for Socialism and Liberation.

“I’d like to have another [rally] after the storm passes,” Junior Salazar, a local progressive activist, told the crowd. “What I challenge you to do is to invite at least five people personally from your circle and bring them out here, because the way we’re heard is when people show out. We gotta show numbers.”