The coup has established itself in Brazil. The impeachment trial voted 61 to 20 against Dilma, but there were actually 2 votes—one for her to be impeached and another one to decide if she should be punished for  the “infamous crimes” they are accusing her of. And on the second vote on her punishment there was no quorum, which would mean 8 years outside of the political life.

Why did this happen? Everyone knew there was no crime of responsibility, which is the only way to impeach a president. And the cowards who pushed her away and tore apart our democracy, had no courage to punish her with a sentence. Many of them said in so many words that there was no crime. The Intercept Brazil has a video showing Senators one by one stating this in interviews after the trial was over.

During the trial, on August 29, Dilma Rousseff went to the Senate to testify and defend herself. This is not demanded by law—it is an option. She could have had her lawyer Eduardo Cardoso there representing her as he had being doing all along.

Almost two weeks prior to her defense, on August 16, Rousseff presented her ‘Letter to the Brazilian People,’ just like ex-president Lula did when he first came to power back in 2003.

At that time, he wrote his letter to ensure the “financial market” that he was not going to have a “radical” government and that his government would be a coalition with many sectors, including the rich capitalists that till then, during the 1990s, were selling and killing Brazil under a devastating neoliberal policy.

He did that in order to “calm down the international financial market,” which was already inflating the dollar against the Brazilian real to show that they didn’t like the result of the elections. And that compromise set what now has become the legacy the Workers Party which was created on trying to build alliances through concessions that hurt the people and gave power back to the capitalist elite that brought this coup against Dilma.

Dilma, who fought in the guerrilla army against the military dictatorship, wrote in her Letter to the Brazilian People, “I faced jail time and torture for fighting for Democracy. I’m now, once more, facing the pain of the injustice in this criminal trial which is an attempt of a coup.”

When she declared that she was going to defend herself at the Senate, the country had a flashback to a famous photo of the president at her trial, as a strong young woman with her head held high with the military officials who were judging her covering their faces. That shook the coup plotters who were afraid that her presence in the trial would turn Senators to her side. 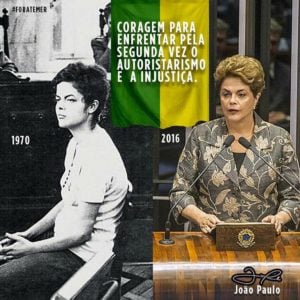 “Courage to face for a second time the authoritarianism and the injustice.”

Dilma Rousseff started her testimony reading a long speech that will remain in Brazil’s history. Just like she did in front of the military, she held her head high and spoke of the real reasons behind the trial and shamed those who are destroying the young democracy of a country that still has much to build and change.

She was questioned for 15 hours, while most of those questioning her are facing real criminal accusations. As was shown in audio leaks, they were conspiring against her so the investigation against them would stop.

Dilma spoke about the current government of Michel Temer—who was part of the coup plot as well—already applying neoliberal policies. The “pre-sal” oil reserve found in Brazil—bigger than reserves in UEA or Venezuela—under the Workers Party was protected under a law that would allow only 10 percent of it to be explored by international companies, and where the profits by law be allocated to health care and education programs. This oil was to be the guarantee for a better future for Brazil. Temer, in less than six months heading the government, already changed this law and sold 60 percent of one of the reserves to a Norwegian company.

She presented great technical explanations that destroyed any argument about her committing a crime of responsibility. And when it was said that she caused the economic crisis in Brazil, she presented graphics showing how commodities and oil prices were dropping since October 2014 all around the world and how the crisis was affecting even countries in Europe and the United States itself. She also explained that just like the global crisis in 2008, the effects in Brazil could have been minimized if the Congress would have governed for the people. But instead, they didn’t pass any of her proposals and created many threats against the country intensifying the crisis.

And that’s true. The president of the Congress at the time, Eduardo Cunha, was one of the main coup plotters. He was also removed from his seat because of a corruption case, which exposed millions of dollars he was keeping in international bank accounts. He initiated the impeachment process because Dilma refused to give him Workers Party votes to stop the investigation against him. And it is well noted by the media and common knowledge that he was blackmailing her.

Actually, many times she explained in so many words why that trial was a coup when questioned by the Senators who had the role of judge. She clarified that it is not necessary to have  the participation of the army for a coup to take place and cited many examples in history of coups that were not orchestrated by the army.

She also exposed the misogynist character of this coup against the first woman elected president. And she thanked the strong and brave women of Brazil who literally covered her with flowers—thousands of flowers that were delivered to Dilma’s house during the months she was awaiting trial.

When questioned how she would govern if she were to go back to the presidency, she answered saying that she would support a referendum calling for anticipation of elections, which are set to take place in October 2018. This is the demand that many protesting against the coup want.

When the Congress voted to initiate the impeachment process, the media stopped their normal program to broadcast live the vote in Congress. But they didn’t do the same when the president of the country spent 15 hours testifying. The Senate Youtube livestream had over 130,000 viewers. And those who could watch, saw a strong woman who once more stood in the defense of our democracy against a putschist capitalist elite.

People took to the streets and thousands surrounded the Senate building. In Sao Paulo, the police used extreme violence to disperse the people who were in the streets against the coup. 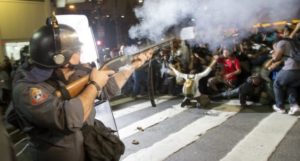 On the next day of the trial, August 30, the prosecution presented their case in a ridiculous political speech, not even talking about what the trial subject should be. Claiming that “God helped them build the case,” and in the lowest move ever, claimed with a fake cry that they were deposing Dilma for the “future of her grandchildren.” An act that disgusted everyone and which made Dilma’s defense lawyer cry after his presentation while talking with the press, where he said this final comment by the prosecution was inhuman. The rest of the day was dedicated to speeches by the Senators where we saw more of the same.

And once more the people took to the streets all over the country with thousands of people protesting the trial. And in Sao Paulo, once more, the police repressed the protesters attacking them with tear gas and nightsticks with many arrested.

In the morning of August 31, prior to the final vote, a motion was presented to not sentence Dilma with political banishment—in case the pro-impeachment vote did win. This would have meant banning her from being a candidate or from having any position in any government institution for eight years.

The supreme court minister who was leading the trial, Ricardo Lewandowski, decided then to split the vote into two motions, one to decide about the impeachment and another to decide about the sentence. This by itself shows how there was no crime committed. If she had committed a crime, no one would be questioning if she deserved the sentence or not. It proved that it was indeed a coup and this whole thing was about removing the Workers Party from the government in order for the capitalist elite to take over.

The vote of 61  to 20 established the coup and thousands of people took to the streets all over country. The sentiment was for fighting, not of defeat. The hashtag #LutarSempre (Forever Fight) took over social media and in the streets people chanted “1964 NO MORE!” (the year of the military coup). They played with the word for mourning in Portuguese “Luto,” which is also how you spell the present tense of the verb “to fight” with posters that said “Luto for me is a verb!”

Again, thousands of people took to the streets all over the country and abroad and this time the number of protests increased with even small cities demonstrating.

Michel Temer, in his speech while taking the seat as the now official president of Brazil, said that he will not tolerate the people calling it a coup. His words echoed in the police repression that spread across the country. But the resistance continues and the call now is to let them not have one minute of peace. The people will push for a referendum and early elections to remove them as soon as possible and to impede them from selling the country and destroy all our rights.

Dilma’s lawyer entered with an appeal at the Supreme Court the following day (Sept 1) and international leaders such as Evo Morales and Rafael Correa have recalled their ambassadors from Brazil. The international media is noticing it, some straight out calling it a coup, some declaring that is definitely a “very strange thing” going on.

Of course, the left in Brazil has been preparing itself for this moment. In every analysis by social movements, left parties, students unions, coalitions and many others, the orientation for this moment is to not give one minute of peace to the coup government. You can see that in the demonstrations all around the country, the majority of the people out in the streets are part of the left in Brazil.

That is good and bad because that also means the people who are not part of the organized left, the working class, haven’t taken to the streets yet. So it is also very important to work on educating the people about what this means and to denounce this government in order to build support from the people. That is why the message calling for early elections is important because it brings back to the people the right to decide who governs them.