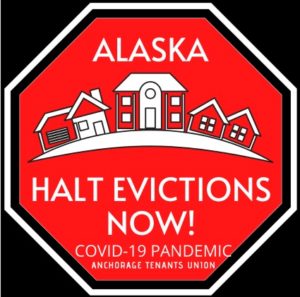 As a result of the  COVID-19 pandemic and state and local directives to people in Alaska to “hunker down” and avoid unneccessary travel, many businesses have closed and massive layoffs are occuring, leaving people with no source of income and unable to afford their rent or even basic necessities in a state with a very high cost of living.

The Anchorage Tenants Union has released a petition to “Halt All Evictions, Repossessions, Foreclosures, and Utility Shut-offs in Alaska” and is prepared to take collective action to ensure the demands listed in it are met by the state government no later than May 1.

ATU is demanding an immediate moratorium on evictions, repossessions, foreclosures, and utility shut-offs throughout Alaska, regardless of ability to pay, for as long as this crisis continues, and that emergency rent and debt forgiveness be granted for a year on any rent, mortgage, and utility bills accrued since the state of public health disaster emergency was declared by the governor on March 11.

The ATU is also calling on the state legislature to expand upon and pass HB 310, a measure to put in place a moratorium on evictions, utility shut offs and foreclosures, and allow these moratoriums to be universal, rather than restricted by income as they are in the original bill. To put it simply, if a landlord or homeowner does not have to pay a mortgage, then a tenant should not have to pay their rent or risk eviction especially when it could be the difference between life and death.

The petition campaign is supported by the Poor People’s Campaign, Native Movement, Fairbanks Climate Action Coalition, Anchorage Democratic Socialists of America, Party for Socialism and Liberation and Stand up for Labor as well as individual people across Alaska.