“Juneteenth has long been celebrated in the African American community but never really known among the broader population. Now the struggle has elevated this historic date and celebration”, said PSL Presidential candidate Gloria La Riva, speaking on the importance of the holiday. Juneteenth (June 19th) is a day for the celebration, commemoration, and remembrance of the struggle to end chattel slavery in the United States. It marks both the historic sacrifices by African American people to win freedom from bondage, as well as the struggle to end the racism and national oppression which continues in the United States today.

La Riva added that “The leadership of the African American nation in the history of this country must be recognized, in all the struggles from the abolition of chattel slavery to the fight against Jim Crow segregation and other battles in the struggle for liberation”. Black people were and have always been a key part of their own liberation, despite the mainstream re-writing of history that makes them the passive recipients of freedom. Freedom was won through centuries of struggle in the form of planned escapes, poisonings, sabotage of equipment, and slave rebellions.

In bourgeois history textbooks, the 1863 Emancipation Proclamation is called the document that “freed the slaves” across the South. However, that Executive Order was just a speech until those words were put into action by force. June 19, 1865 marked the day that Union General Gordon Granger read General Order Number 3 in Galveston, Texas, announcing the end of slavery about two and a half years after the Emancipation Proclamation. There were 250,000 slaves in Texas who surely felt a mixture of shock, joy, and empowerment. Soon after the full defeat of the slavocracy in the Civil War and the overthrow of Reconstruction, the Ku Klux Klan was birthed and the former slaveholding class manufactured a new system of sharecropping, mass imprisonments, and Jim Crow laws in order to terrorize and super-exploit the African American population into staying loyal to those who had denied them freedom.

Every year since the end of the Civil War, Juneteenth has stood out as a Liberation Day for African Americans. Slavery was never fully abolished, and it is alive and well due to forced labor in prisons, stolen wages at work, and the massive underground network of human trafficking. Juneteenth, however, gives us hope that all that is called “impossible” can be achieved through sacrifice and organized struggle. The fight to destroy the interconnected systems of slavery, segregation, mass incarceration, poverty, and white supremacy rages on today.

There has never been a pause in the struggle for Black Liberation. From taking over slave ships, to burning plantations, to poisoning masters, to armed struggle against the slavocracy, to self-defense against Klan and police terror, to massive marches for voting rights, to current marches against the oppression of African American people today, the long march toward freedom continues. This Juneteenth will be a very special one for millions of Black people across this country, and it should be a day remembered and celebrated by not only African Americans, but all those who reject slavery and accept full and total liberation for the oppressed in this country. The La Riva/Peltier 2020 Presidential Campaign is proud to celebrate Juneteenth across this country, and encourages people to use it as a day to educate, celebrate, and demand change. The La Riva/Peltier campaign is supportive of state and local moves to make it a recognized holiday, and Gloria La Riva said, “We look forward to the day it becomes a national holiday.”

We commemorate the radical legacy of Juneteenth, as we fight to end the state sponsored terror that plagues our communities and uplift the freedom fighters and innocent lives lost along the way. 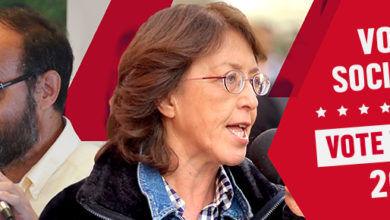