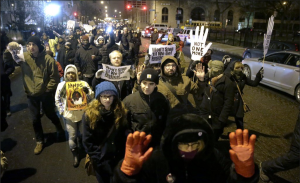 On Nov. 24, hundreds of activists and community members gathered at Chicago Police Headquarters to demand justice for Michael Brown and to express their solidarity with the people of Ferguson. Despite freezing temperatures and thickly falling snow, protesters were undeterred from their desire to make their voices heard as they gathered in Chicago’s Bronzeville neighborhood at 35th and Michigan.

Speakers representing Black Youth Project 100 and We Charge Genocide started off by drawing connection between the murder of Michael Brown and the ongoing victimization of black youth here in Chicago and elsewhere throughout the country.  In the words of organizer Mariame Kaba as quoted by speaker Malcolm London, “We are not trying to indict a man, but a system.”

It was made clear that this is the same system that just forced Marissa Alexander to accept a ridiculous plea deal which gives her three years in prison for simply defending herself.  The same system that murdered Eric Garner in New York, Dominique Franklin in Chicago, Tamir Rice in Cleveland, and so many, many others.  Eighty-nine miniature black coffins were displayed throughout the rally to represent the 89 police murders that the Chicago Police Department has committed in the last five years alone.

As one participant, Ashley Stephens, put it, “The state specifically has been historically targeting black folks, either putting us in prison or killing us, and all that shit relates to why we need to be out here, not only for Mike Brown, but for Marissa Alexander, and everyone else this is going to happen to.”

Another protester, Fleming, spoke of the need for radical change in the structure of policing. “We believe that it’s time for people to control their own policing activity.”

Shortly after 8 pm Central Time, a hush fell over the crowd as people stopped to listen to a radio broadcast of the press conference called to announce the grand jury decision.

Coming after weeks of delay and numerous announcement dates which were never realized (a tactic which seemed clearly meant to confuse and demoralize those trying to organize against police oppression), few in the crowd seemed to have any hope left that the state would pursue justice.  But when their fears were confirmed, it still felt like a slap in the face to all.  Shouts of “That ain’t right!” and, “Bullshit!” filled the air immediately, and within minutes people took to the streets in a spontaneous march, chanting “Justice for Mike Brown! We didn’t get it; shut it down.”

The march moved east at a brisk pace until reaching Lake Shore Drive.  The people then took the highway, shutting down traffic in both directions with the nearby police powerless to stop them.

The march continued to Congress and Michigan and then north to the loop where police were forced to close down several streets and to use makeshift barricades in an attempt to contain the energy and pent-up anger of the people.  Despite these countermeasures, the march persisted until after 11 p.m. throughout the downtown area.

At that time organizers spoke of the need to regroup called for continued action the next day.  This led to a sit in at City Hall on Monday morning at 9 a.m., planned to last 28 hours to represent the fact that every 28 hours a black man is murdered by police in the United States.

The need for continued action in order to stem the onslaught of violence against the Black community was stressed by all in attendance.

As Charlene Carruthers said on Monday morning at the beginning of the sit-in, by allowing the police to murderer Black teenagers with impunity, this decision is still an indictment, but an “indictment of the state.”