On July 2 the Chicago Teachers Union organized a picket to protest the 1,400 jobs that were cut by the school board the day before. Mayor 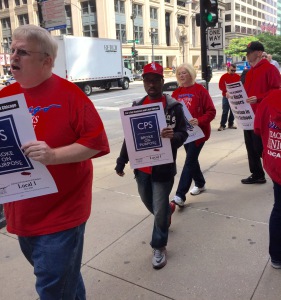 Rahm Emmanuel said the layoffs and $200 million cuts are in response to having to pay for the CTU pension plan. This shows that the mayor and the school board had no intention of just paying their share without attacking CTU at the same time. Hundreds of teachers, teachers’ aides, parents and students marched outside City Hall chanting “CPS is broke on purpose!”

As the mayor continues his attack on the teachers union, major corporations like Boeing and Ford in Chicago are paying little to no taxes, highlighting the crisis that is being manufactured by the mayor and the unelected school board.

Willy,  a teachers assistant, told Liberation, “I’m out here for that fact that we need better schools, we need better working conditions. We need better equipment for our students. I work in a school without a functioning computer lab.” Willy is just one of thousands of educators in Chicago facing the same problems. Teachers are having their classrooms expanded without getting increased resources.