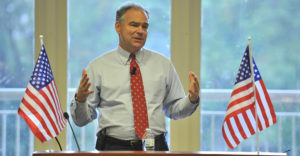 Today Hillary Clinton unveiled Senator Tim Kaine of Virginia as her vice-presidential running mate. The choice reflects exactly what the Clinton campaign is offering to the American public: a continuation of the status quo of militarism, right-wing policies and Wall Street control over government.

After Bernie Sanders officially endorsed Clinton, some had held out hope that Clinton would select a vice-presidential candidate from the “progressive” wing of the Democratic Party, such as Elizabeth Warren, in order to curry favor with the disaffected voters who had been mobilized by Sanders’ anti-corporate campaign. The selection of Kaine is an emphatic message from the Clinton campaign that it has nothing but disdain for Sanders’ supporters and the working class.

During his tenure in the Senate, Kaine repeatedly showed his dedication to U.S. imperialism and the dictatorship of the wealthy. As a member of both the Senate Armed Services Committee and the Foreign Relations Committee, Kaine lobbied for the ongoing bombing campaign in Syria. Two years on, that bombing campaign continues to shock the world with its brutality and disregard for civilian life: earlier this week 85 Syrian civilians were killed by a U.S. bombing.

Kaine is no better on economic issues. He is a co-chair of a Mexican-American inter-parliamentary committee that regularly meets in both countries to shape policy on issues, including free trade. Kaine has repeatedly defended the North American Free Trade Agreement, the notorious Bill Clinton era legislation that helped de-industrialize the United States and increase exploitation of Mexican workers. Last year, Kaine voted to fast-track the Trans-Pacific Partnership, the modern day sequel to NAFTA that was opposed by workers and unions across the country. Kaine paid no heed to the opposition because his loyalty, like that of the Democratic Party, is not to the people but to Wall street investors and the capitalist class.

Though the Clinton campaign has crafted a flimsy narrative in which Hillary is a champion of civil rights, Kaine’s history and beliefs run counter to this narrative. Like Clinton herself, Kaine was an opponent of LGBTQ rights for many years, only changing his public stance on gay marriage and adoption rights when it was politically expedient. In 2005, he said that gay couples should not be able to adopt. Presumably, like Obama and Clinton, he experienced a profound personal evolution that just happened to coincide with shifts in public polling.

Kaine is anti-abortion in his personal life. Though he does not advocate overturning Roe v. Wade, Kaine does support restrictions on women’s bodily autonomy including mandatory parental consent before abortions and making illegal late-term abortion. Thus, he is a far cry from the feminist champion that Clinton has proclaimed herself to be. NARAL Pro-Choice America gave Virginia an “F” on abortion rights in 2007 when Kaine was governor of the state.

The Clinton campaign is, of course, spinning Kaine’s history into something to be admired. They don’t say he is an advocate for war and capitalist domination. Instead, they bill him as a public servant with “foreign-policy experience” and the ability to “compromise” on legislation. Before he was officially announced, the media also repeatedly remarked on the fact that Kaine is Spanish-speaking, a basic skill they seem to think will help cinch the Latino vote. One wonders if Kaine will offer a Spanish-language apology to the families torn apart by the Obama administration’s record-setting deportation policy or the victims of the Clinton-backed coup in Honduras. I doubt it.

Despite the spin from the Clinton campaign, it is not difficult to see Kaine for who he really is: a warmonger and dedicated protector of capitalist-class rule. The choice of Clinton and Kaine or Trump and Pence offers no real way out of the multiple crises facing the planet and the working class. The Clinton/Kaine ticket is no real antidote to the fascist demagoguery of Donald Trump.  It is more obvious than ever that the people need to reject the two-party system and build a movement for revolutionary change.