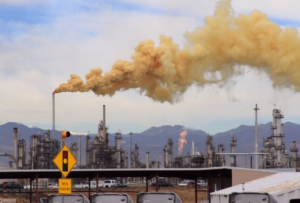 Residents of the North Denver communities in the shadow of the Suncor oil refinery packed a Commerce City courtroom on the evening of August 2 for a public hearing, eager for the rare opportunity to have their voices heard. The hearing, regarding a request by Suncor Energy to modify its permit to increase emissions, was dominated by the passionate and urgent testimony of the predominately Latino and working-class community members who have borne the human cost of living in some of the country’s most polluted zip codes.

Suncor’s refinery, one of the largest sources of air pollution in the Denver metro area, has a long history of permit violations and accidents. Last October, for example, a power failure resulted in the release of 75,600 pounds of sulfur dioxide, leading to road closures, a school lockdown, and a warning to residents to shelter-in-place.

The communities surrounding the refinery are predominately low-income and Latino. They are highly burdened with many sources of pollution, including a pet food factory, two nearby interstate highways, a power plant, and several Superfund sites. Zip code 80216, which includes Denver neighborhoods Globeville and Elyria-Swansea, was recently identified as the most polluted in the country.

Unsurprisingly, this area also has some of the nation’s highest rates of asthma, cancer, cardiovascular disease, diabetes and obesity—all diseases linked to air pollution.

The proposal to increase emissions from the Suncor refinery comes in the wake of federal approval for the expansion of I-70, a plan that threatens to permanently reshape the Elyria-Swansea and Globeville neighborhoods by requiring the demolition of dozens of homes and exposing residents to even greater levels of air pollution.

At the hearing, members of the audience nodded in vigorous agreement when a community member noted that it “seems like their community is under attack from all sides.” It is in this context that community members have organized to challenge Suncor and demand greater enforcement of the regulations purported to protect their safety and the environment.

‘A civil and respectful tone’

The Aug. 2 hearing was a rare opportunity for community members to speak face-to-face with representatives of Suncor and the Colorado Air Quality Control Commission. The hearing was requested in June by the neighborhood organization Cross Community Coalition, working with legal aid group EarthJustice.

True to form, a state official opened the public hearing with a plea to maintain a “civil and respectful tone.” Chanting, holding up signs, or other disruptive actions would not be tolerated. In addition, the 45+ community members who had signed up to speak would need to limit themselves to 2 minutes each, because the hearing would last only two hours.

These official-sounding limitations papered over the stark injustice of the situation. If community members had not asked for a hearing, officials would have made these crucial decisions about their health and safety without any meaningful public participation. Now, after decades of attacks from all sides, residents of North Denver were instructed to ask politely in the hopes that these officials, the people paid to protect them, would do their jobs.

The hearing began with a brief PowerPoint presentation by a soft-spoken Suncor representative who offered platitudes about Suncor’s concern for “environmental performance” and “continuous improvement.” These statements were directly contradicted by the informed and articulate testimony of a community conscious of being under siege for decades.

Dina Fuente spoke about her children’s respiratory problems and the constant visits she has made to hospitals and clinics over the last two and half years. Briana Bradley, who along with her husband recently purchased her first home less than a mile away from the Suncor refinery, tearfully described feeling “scared to death” now that she is aware of the serious health risks her stepchild and unborn child could face as a result of accidents and pollution from the refinery.

Many speakers demanded that air quality officials look beyond the narrow scope of the proposed permit modifications and consider the larger context, especially in light of the Trump administration’s attempts to dismantle the EPA. With the possibility of even less federal oversight — already woefully insufficient — the community pointed out that the state officials before them were their community’s “last defense” against Suncor.

For Lorena Osorio and Romelia Maciel it was clear that hoping for state officials to protect them is not enough. We spoke to them in an interview after the hearing.

Liberation News: What are you hoping Suncor and the Commission will do?

Romelia: … And for there to be more control over the rules so that we can get rid of this pollution that our children are breathing, because it causes many children to have asthma and respiratory diseases, and there have even been cases of cancer.

LN: After seeing the presentations tonight do you think that Suncor will comply with the regulations?

R: Well, we hope so. It’s a good start — and at least we’ve seen more [members of] the Latino community. You know, even if [the refinery] doesn’t affect you, it’s important that we stand united as a community. And even that is not enough, because we want to be a situation where we’re representing ourselves to them directly.

LN: What can members of the community do to support your efforts?

R: More people need to get together and unite the community. The people united can never be defeated!

Interview and translation by Moira Cassidy