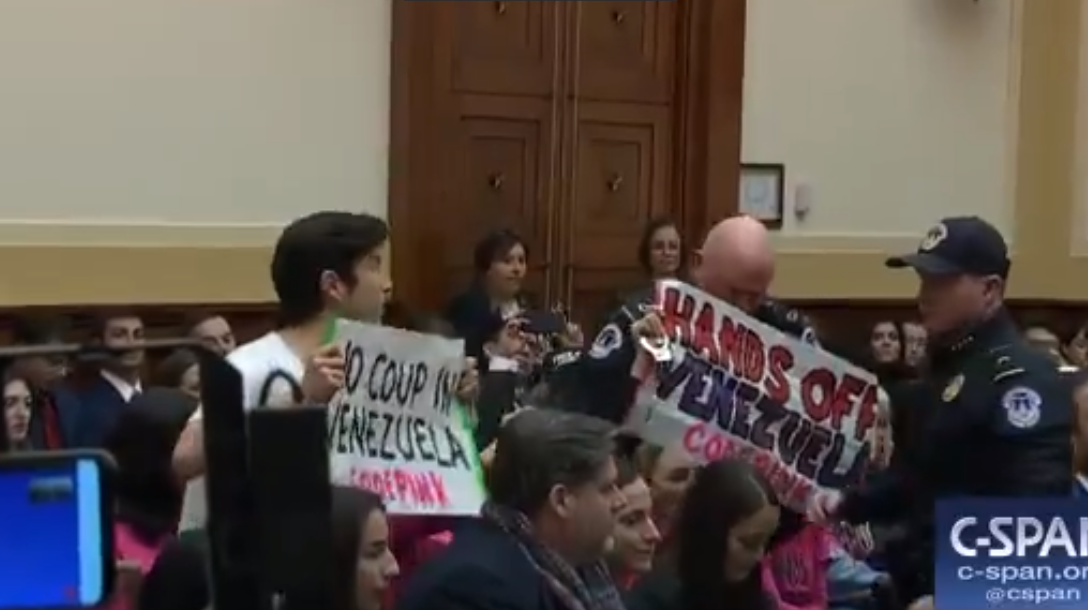 The author of this article, Kei Pritsker, and Ariel Gold of CodePink protesting Elliot Abrams in Congress on Feb. 13. Photo: C-SPAN

Kei Pritsker is a member of the Party for Socialism and Liberation. Watch the video of the protest he participated in here.

Elliott Abrams is a war criminal. I don’t say this to be hyperbolic, he is literally a war criminal. That’s why I protested Abrams while he was testifying before Congress, an action I was arrested for.

Abrams, appointed by Trump to be the U.S. special envoy to Venezuela, is no stranger to mass murder and regime change, far from it. As Ronald Reagan’s Assistant Secretary of State for Human Rights and Humanitarian Affairs, Abrams tried his absolute hardest to make that position as oxymoronic as possible. Overseeing Reagan’s policy towards Central America, Abrams ensured that the dictator of Guatemala, General Efraín Ríos Montt, went undisturbed as he carried out what the United Nations facilitated Historical Clarification Commission called “acts of genocide” against indigenous people in the Ixil region. Abrams advocated for more military aid to Montt’s regime and praised his killings saying he “brought considerable progress” on human rights issues.

Abrams also oversaw the U.S. training of right-wing military units in El Salvador, which slaughtered all 800 people living in the village of El Mozote, not before raping women and girls as young as 10. Abrams said the reports were “not credible” and that the massacre was being used as propaganda by anti-government fighters. He later hailed U.S. policy in El Salvador as “a fabulous achievement.” In 1992, the United Nations backed Commission on the Truth for El Salvador concluded that there was proof to verify all of the claims of mass murder and sexual abuse. Abrams was also a vocal cheerleader for the invasion of Iraq and is passionately anti-Palestinian.

Despite Abrams’ genocide denial, which is publicly available on Congressional record for all to see, he was invited to testify in front of the House of Representatives Committee on Foreign Affairs at a hearing called “Venezuela at a Crossroads.” We should remember that Abrams supported the failed US-backed military coup of Hugo Chavez in Venezuela in 2002. Abrams also plead guilty two counts of withholding information about his role in the Iran-Contra scandal from Congress, a crime he received a pardon for by George H.W. Bush.

Standing up against the U.S. coup in Venezuela and all of Abrams’ crimes

I was there to attend a disruption organized by the anti-war organization Code Pink. Before even arriving at the hearing, it was clear that the U.S. Congress embodied the extreme inequality that characterizes our society. In the hallways were numbers of homeless people waiting in line for committee hearings. It is a common practice for corporate lobbyists to pay homeless people to be placeholders in line so the lobbyists don’t have to wait to get a good seat in hearings. Once I sat down, I took off my shirt, revealing another t-shirt which read, “Mr. Elliott Abrams: War Criminal. Join Code Pink, Join ANSWER Coalition.” Elliott Abrams walked in soon after, wearing an emotionless look on his face.

Veteran peace activist Medea Benjamin and I approached Abrams and asked him if he would answer to the laundry list of war crimes he committed across Central America and the Middle East. He didn’t even look us in the eye. He just didn’t care and knew all he had to do was endure this for a few hours before he could go home to his mansion built with blood money, arrogance all too common among Washington’s imperialist henchmen.

As soon as Abrams was invited to begin his testimony, Code Pink activist Ariel Gold and I jumped on our seats, holding banners opposing Abarms’ coup in Venezuela. We began shouting out his crimes against humanity for all to hear. I specifically stated that he planned to send weapons to right-wing factions in Venezuela as he did in Guatemala and El Salvador where those policies led to genocide. We were promptly removed from the room by U.S. Capitol Police, as 15 or so Code Pink activists applauded. Code Pink activists, David Barrows and Caroline Debnam were arrested right after us.

The four of us were put in the back of a police van and we sang Pete Seeger’s “Solidarity Forever” all the way to the police station.

Every single penny spent hurting working class Venezuelans is also an assault on the U.S. working class, which has experienced austerity policies and corporate looting under the Trump administration — which the administration also want to unleash on Venezuelan workers. It is in the interests of people in the United States to oppose Trump’s attacks on a government like Venezuela’s that is more oriented to serve the needs of our class, the working class, than Wall Street. The Elliott Abrams of the world that seemingly wield so much power may seem undefeatable at times. But I will tell you, up close, he’s nothing more than a frail war criminal, too tired to defend his own crimes.

I will be joining the national march on the White House against the coup in Venezuela on March 16, organized by the ANSWER Coalition and a wide range of anti-war and progressive organizations and leaders. I urge everyone to join me and countless others who will demand: U.S. Hands off Venezuela!