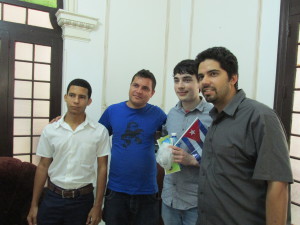 During preparations for the annual, massive May Day demonstrations, a delegation of members from the Party for Socialism and Liberation held a meeting with youth leaders in Havana, Cuba. As more and more young people begin to rise up against the system in the United States, and as important advances are made by the Cuban Revolution, this was an important opportunity to exchange ideas and learn in greater detail about the situation in both countries.

Yanniel Ortíz from the National Committee of the Union of Young Communists (UJC) and Leondro Borrego, Vice-President of the Federation of High School Students (FEEM), attended the meeting. They explained the objectives of their organization, which reflect the highly organized and participatory nature of Cuban society.

The UJC and FEEM have an educational role, informing Cuban youth about the history of their country and its present direction. These groups have the important function of helping to develop and strengthen revolutionary consciousness among young people. “We honor and study the youth who have died in the constant struggles from the colonial past to the present,” said Leondro.

In addition, the UJC and FEEM communicate the opinions of youth to the government and facilitate the participation of young people in government. 102 deputies of the National Assembly, the main legislative body of Cuba, are youth, one of the many achievements of the revolution.

Police brutality was another main topic of conversation. In sharp contrast to the United States, Cuban police officers do not function as oppressors and occupiers. Yanniel explained that Cuban police receive a high level of education, and are trained in the ethics of Cuban society — a socialist commitment to meeting the people’s needs and facilitating the full development of human beings.

The U.S. delegates noted how they saw comparatively few Cuban police officers and the respectful low-profile they adopted, a welcome change from the arrogant and overwhelming presence of cops across the United States. They went on to share some of their experiences with the struggle against racist police terror in the United States.

Finally, the conversation turned to the international situation, especially recent developments in Latin America. Cuba has recently achieved some important victories over U.S. imperialism. Last December, the remaining members of the Cuban Five were freed from U.S. prisons. Although the U.S. blockade remains very much in place, there is some movement in the negotiations aimed at the normalization of relations between the United States and Cuba.

Just two weeks prior to our meeting, Cuba attended the Summit of the Americas in Panama for the first time at the unanimous insistence of Latin American countries, embarrassing the U.S. government which had for so long refused to allow Cuba’s participation.

The Cuban youth leaders see these developments as victories that the U.S. was forced to accept due to the rise of progressive governments in Latin America and the region’s growing political unity. Yanniel explained, in reference to President Obama’s behavior at the Summit of the Americas, “He knew that Latin America is different. Latin America today is not the Latin America we had 20 years ago.”

Yanniel and Leondro closed the meeting by expressing the urgency of youth solidarity in an increasingly dangerous world, and expressed hope that a youth brigade to Cuba from the United States could be organized in the future.